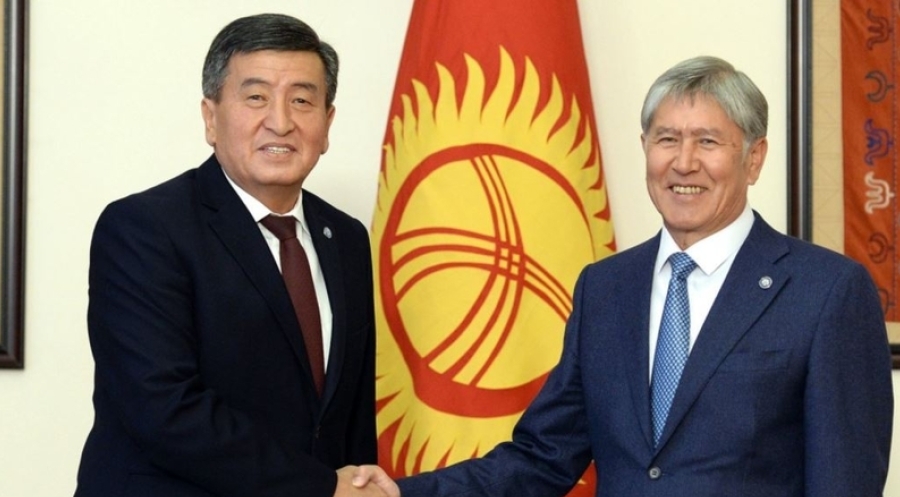 It seems that the former president is trying to find a common language with the current president, and if so, there will be no revolution and with no incentive, as he indicated that he will participate only in the parliamentary elections and will not contest the power. To weaken the previous government, the current ruling group used the Chinese company, TBEA, which carried out the modernization of the Bishkek thermal power station, which is involved many acts of corruption by some of Atambayev’s team. Now, their move is to remove the immunity from the former president, which is a winning card in the hands of the current government.

However, it is not easy for the current authorities to implement these views, because the current leader has failed to win the confidence of the people. This year, for example, the process of enforcing new laws has angered the people against the authorities, increasing the likelihood of a popular uprising in the spring. Indeed, the management of the group formed by President Atambayev at the end of his term was weak in the administrative process, and the strength of the new government strikes has weakened his team. Many have become like the “winning card” in the hands of the former president, and on this basis he called for dialogue.

So we can conclude that the old and new governments are accusing each other of matters, and what unites them are two things: First: the modernization of the Bishkek thermal power station; the second is the rigidity of the new laws; the reason why some of these politicians have denounced each other in criminal matters due to their performance in these cases to harm the people. The reason that unites them in their respective missions is the execution of these crimes. Accordingly, the above-mentioned criminal matters confirm that the two Governments are equally guilty because they are the perpetrators of these crimes. Yet the worst is that each of the two representatives of the authorities conceal the truth of these crimes from the eyes of the people, and here is the beginning of the story:

Talks between China and Kyrgyzstan on the modernization of the Bishkek thermal power station under President Bakiyev began and were “cooked” during the Atambayev’s era, and was completed at the end of his term. At the time, Jeenbekov was prime minister, and at the time China granted a loan of 386 million dollars, in return for its repayment as $480 million by 2033. The modernization of the Bishkek thermal power station was given to the Chinese company “TBEA”. According to expert analysis in practice, the Chinese company carried out the executive work for $ 250 million, but it was very expensive, an estimated at $380 million it is not known how much the authorities took of bribes from this difference).

Therefore, behind Kyrgyzstan’s fall into the debt trap is the real issue for the crime and that is China. Our rulers became the executors. The problem of applying the “new laws” in 2019 began during the Bakayev rule, which was proposed by the World Bank under the guise of “judicial reform.” Therefore, Kyrgyzstan was forced to obtain the next tranche of loans from the World Bank i.e., filling the state budget from the people’s pockets, as well as through saving in budget expenditures this reform was introduced to meet the conditions presented by the World Bank. This problem was also “cooked” during the Atambayev rule, was signed in 2017 and was implemented during the reign of Jeenbekov, so the commander of this crime was the World Bank. As long as the rulers who committed these crimes do not repent, the crimes will continue. They try to hide by saying that colonialism was behind these crimes. They were the shield between colonialism and people. They created the necessary conditions in the country by using the consequences of these crimes for their own interests. And they argue and try to conspire for this sake.

O Presidents, the new and old! Is it not time to give up your masters the colonial powers and adopt the interests of the people ?! Isn’t the truth that the reason for your sinking into the mud and the hatred of your people against you is because of your colonial masters? Do you give up the Hereafter in order to please your colonial masters?! Instead of trying to deceive the people, it is time to unite with people and go against the colonists, not to seek ways of bringing oppression to the people, so unite to protect the interests of your people and for the sake of your Hereafter

“And cooperate in righteousness and piety, but do not cooperate in sin and aggression. And fear Allah; indeed, Allah is severe in penalty”