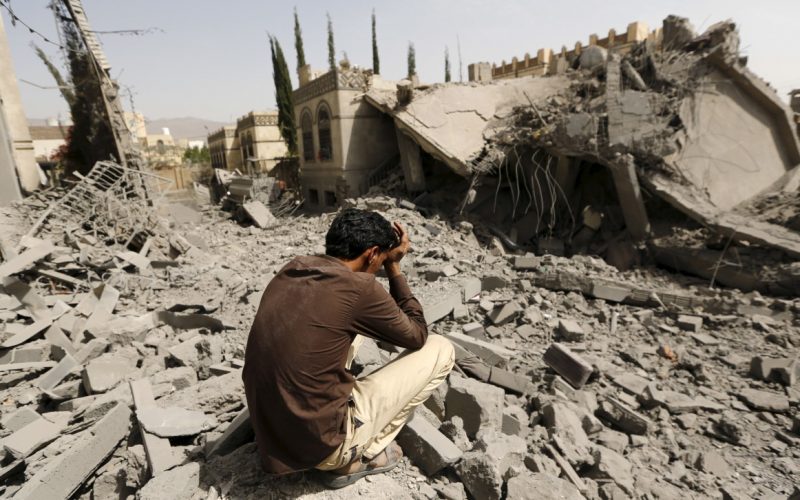 The Houthis used all means of media; visual, audio and printed paper when covering the news about those who were deported forcibly from Aden in the past few days – that followed the Houthis’ announcement of their responsibility of killing Abi Yamamah on Thursday 01/08/2019- putting all the blame for these tragedies on those who share governing Yemen from Aden – who remained to be spectators participating within – by not preventing the forceful deportation procedure against the sons of north Yemen in Aden – that was carried out by a paid gang and group of criminals, if you searched for them you would realise that they are the ones who deserve to be expelled from Aden.

In addition, from behind these actions, the Houthis tried to appear innocent from the calamity of the forcibly deported people from Aden, distancing themselves and denying any responsibility that befell upon them, on what happened to them from evil actions such as being compulsive towards them and destroying their transported valuables. Some Houthis would even take further measures where they would beg international organizations to offer money to take care of the deported people.

How could they do that and they are only governing some parts of Yemen and not as a whole and they have not changed from ruling with other governing systems other than Islam instead of ruling by Islam? However, if they governed Yemen completely and by Islam people would have rushed, Muslims and non-Muslims from every direction seeking from them all goodness, justice and safety after they have missed that on earth. Also, the Houthis have taken the money and they hoarded it between them and their allies and blocked it and prevented it from the rest of the people. Hence, poverty, beggary and need is spread amongst people. They ran away from Sana’a out of fear from the Houthis who kept chasing them towards the Fitna fighting fronts and as a result they were the victims of the separatists in south Aden.

The establishment of the state and ruling of Islam upon the arrival of the Messenger of Allah (saw) in Al-Madina Al-Munawwara restrained the Jews, and made the Ansar the inhabitants of earth and owners of wealth to share the morsel with their brothers Al-Muhajireen who didn’t own anything from this Dunya’s dust. Are the Houthis reading that the Messenger of Allah (saw) made a treaty with the Jews and united Al-Muhajireen and Al-Ansar as brothers or is it that they don’t comprehend what they read?!

“…then it will be a Khilafah upon the method of Prophethood…” and we certainly know without doubt the people of faith and wisdom understand that and want to live under the shade of the Khilafah Rashidah (righteous Caliphate) upon the method of Prophethood and do not find an alternative but to work with Hizb ut Tahrir to reestablish it and live under the banner of Okab away from the call of dynasty and separation.