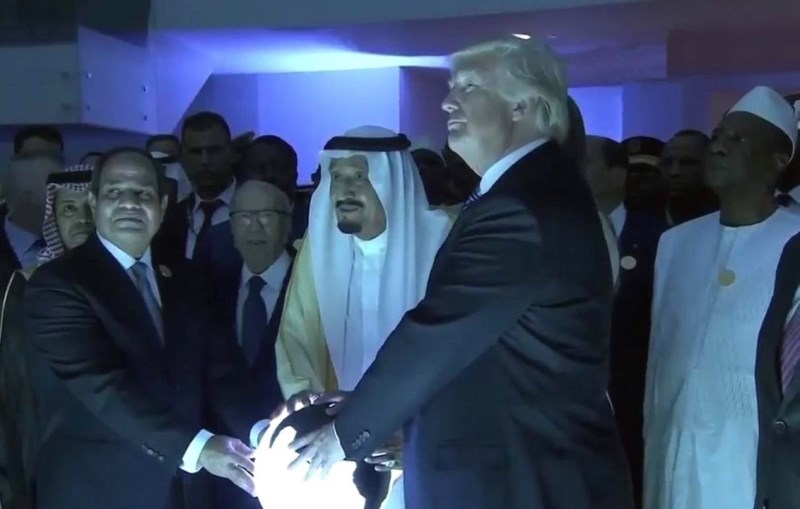 Many can recall the sinister scene of President Donald Trump back in 2017 in Saudi Arabia, putting his hands on a glowing globe together with Saudi King Salman bin Abdulaziz, and Egyptian President Abdel Fattah al-Sisi. The basis of the US, Middle-East strategy was reinforced and the Riyadh Declaration was signed “to bring peace and security in the region and the world” as they put it. But in reality, it was solely to strengthen the US hegemony and secure their interests in the region, politically, militarily and economically. The declaration is mainly based on cooperation with the US (Middle East Strategic Alliance) against the “common enemy” Iran and its nuclear ambitions and regional influence. And recognition and fully acceptance of “Israel” by the Arab and Muslim countries.

However, the main reason behind this US facade policy is not Iran’s nuclear ambition because Trump unilaterally pulled back out of an up and working effective nuclear deal with Iran, which was reached between the U.S., Iran, the UK, Russia, France, China, Germany and the EU in July 2015 (The Joint Comprehensive Plan of Action (JCPOA)). Nevertheless, the US it trying to reduce the influence of Iran in the region after it had used it.

Also, the US is using Iran to create a scarecrow for the region by fuelling the Sunni-Shi’i conflict in order to form an American-Arab coalition by presenting a common enemy for the Arab states and “Israel”. By doing so the US aims to form a coalition including the Zionist entity against Iran. By marketing the corrupt narrative “The enemy of my enemy is my friend”, it seeks for the recognition, acceptance and cooperation of the occupier “Israel” in the region through establishing closer cooperation on various fronts, such as military and economic partnerships.

In 2018 Secretary of State Mike Pompeo met in New York with foreign ministers from Bahrain, Egypt, Jordan, Kuwait, Oman, Qatar, Saudi Arabia and the United Arab Emirates to advance this project. Again in 2019 the US organized a conference in Warsaw/ Poland in follow up of this project with the same Arab countries.

So, the treachery of the UAE (United Arab Emirates) to fully “normalize” its ties with “Israel” in 2020 did not come as a surprise. Furthermore, a significant increase in the informal interactions between the two and increased unofficial cooperation based on their joint opposition to Iran’s nuclear program and regional influence was observable. Unfortunately, the example of UAE is more or less applicable to all other Arab and Muslim countries.

Even though the treacherous leaders in the Muslim countries have clearly shown their true face and their loyalty to the enemies of Islam. The Ummah seems paralysed and not able to counter it. This is because a certain narrative is deliberately promoted to mislead the people.

For example: Iran is a threat for the Sunni practice of Islam in region. So, in order to protect the Sunni-Islam, Shia and Iran must be fought. Iran is the enemy, according the logic of “the enemy of my enemy is my friend” working with US and “Israel” to defeat the enemy (Iran) is allowed. The deal UAE made with “Israel” is that the latter agreed to suspend the annexation of territories in the occupied West Bank. So, the deal is in the benefit of Islam and the Ummah as a necessary political manoeuvre in order to contribute to the solution of the “Israeli”-Palestinian conflict.

But in reality: The Sunni practice was not even applied, instead Western capitalistic ideas are fully implemented. So, the biggest threat to Sunnism is not Shi’ism but Capitalism. The biggest enemy in the region and beyond are undoubtedly US and their western allies, Iran is just a proxy of US. So how can the marionette cause a bigger threat then its master? By “normalizing” the relationship with an occupier of the Blessed Land, UAE is giving legitimacy to an illegal murderous state. Besides that, in Islam the concept of “The enemy of my enemy is my friend” is rejected, the enemy is clear and the friend is clear. At most the enemy of my enemy can be a state where there is a treaty, not friend. Also, Islam rejects to fight an ally under the banner of kufr. And by agreeing to a so-called suspending of annexation of parts of the West Bank the occupier “Israel” is recognized as a state. It’s like making a deal with a thief who has stolen 1000 coins of gold from you, and he agrees not to steal more, so he can keep the 1000 coins. At least, for the time being. Prime Minister Benjamin Netanyahu said he had only agreed to a “delay.” Is there something left to defend such an act?

And the case of Erdogan criticizing the normalization between UAE and “Israel” is even more pathetic. Because, Turkey does not only recognise the illegal Zionist entity, Turkey has strong diplomatic, military and economic ties with “Israel” and moreover with the biggest enemy of Islam, the US.

It’s not that the narratives of the kuffar are strong, surely, they are false and weak. But what makes them seem strong is the lack of understanding and trust in Islam as a comprehensive and capable ideology for all mankind by the Ummah. When the Ummah looks to the problems we are facing today solely with Islam we can be strong again like we always were. Otherwise we will be constantly misled and humiliated, again and again.