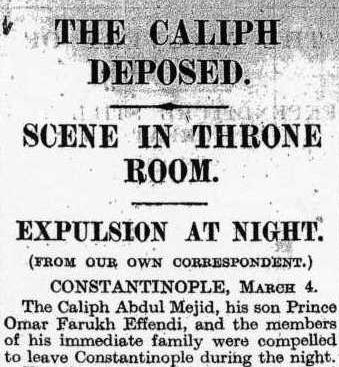 On the 28th of Rajab 1342 Hijri (3rd March, 1924), the last true legitimate leader of the Muslims was deposed in Istanbul, and the last government that ruled by the law of Allah (swt) was discarded and replaced with the iron fist of secularism.  On the anniversary of this terrible calamity, it is imperative for us to take stock of the significance of what we have lost in the past century, and understand what is the response that Allah (swt) requires from us.

The Centrality of Khilafah in the Life of the Believers

The Khilafah is not like other ruling systems; it is not devised on the notions of an elite land-owning class like with feudalism or a monarchy; it is not built on the ideas of an intellectual class that has no connection with reality like with Communism; it is not built upon a compromise solution between the religious clergy and the intellectual elite like with Capitalism; rather, it is a system that was revealed by the Creator of the universe, and is built upon His Wisdom, Justice, and Mercy. Islam was first implemented by our beloved Prophet ﷺ when he convinced the tribes of Yathrib to take him in as their ruler. He ﷺ implemented the economic, social, judicial, and ruling systems that were revealed to him by our Creator, winning the hearts and minds of the Arabian Peninsula and beyond.

When he ﷺ knew his blessed life was nearing its end, he told his companions:

“Bani Isra’eel used to have their political affairs managed by the Prophets; every time a Prophet died another Prophet was sent after; but there will be no Prophets after me, rather there will be Khulafaa (successors in matters of ruling), and they will be many.” The Companions then asked, “What do you order us?” The Prophet ﷺ replied, “Give them the Bay’ah (pledge of allegiance) one after another, and give them their rights, for truly Allah will ask them about their responsibilities.” [Muslim]

Under the rule of the rightly guided Khulafaa, the Ummah sustained a period of justice and prosperity, and the message of Islam spread far and wide. Even after the rightly guided era ended and some mistakes were introduced into our ruling system, Muslims were still unified, protected, and ruled by the Islamic system. The Khilafah also granted protection and prosperity to non-Muslims who lived under its rule for the duration of its 1300+ year existence.

However, in the late 19th and early 20th century, Islamic rule began to weaken. Kufr notions of democracy, liberalism and secularism started seeping into the minds of the Muslims, due to a concerted effort by the enemies of Islam. Even worse nationalism, a modern day version of tribalism that our Beloved Messenger ﷺ had come to abolish, was introduced into the Muslim lands. This intellectual attack on the Ummah culminated in the traitor Mustapha Kemal abolishing the Khilafah in 1924.

As Muslims, we have seen much tragedy since the fall of the Khilafah. We observe the enemies of Islam spilling our blood across the Muslim lands – from the mountains of the Philippines, to the valleys of Kashmir, and the forests of Crimea. We observe one of our holiest places, Al-Quds, occupied by the illegal Zionist entity, and the cries of its people an open sore for the Ummah.  We see how the “free world” imposes its ruinous economic models and its hollow social systems upon our lands, plundering our resources and weakening our social institutions.

What’s worse is we see the propping up of the worst amongst us as our leaders – men who lack the courage and moral backbone to stand up to the enemies of this Ummah – who are more than willing to help our enemies in their campaign of theft and destruction over our lands, and who are easily bribed with promises of power and wealth while betraying the promise this Ummah made to Allah (swt) and His Messenger ﷺ.

Amid all this chaos, Muslims are desperately seeking a solution. We formulate theories of our own, revolving around the thinking of “if only Muslims did this or that, our lands would be unified and our leaders would become righteous.” Let us not forget that our Lord who guided us on something as simple as how to clean ourselves after using the toilet would never leave us without guidance on such a vital matter that desperately needs His guidance. The beloved Messenger ﷺ tells us:

“Truly, the Imam is a shield, you fight behind him and find protection in him” [Muslim]

The challenge for this Ummah is not to invent some new method of revival; rather our challenge as an Ummah is to raise our shield once again by following the guidance of the Prophet ﷺ on how to re-establish the Islamic Khilafah and resume the complete Islamic way of life in the Muslim lands.

The Work of the Sahaba

We are at a unique time in the history of this Ummah. Never before has the Muslim Ummah remained for so long without a Khaleefah or a Khilafah state. And, while its absence exposes us to never-ending tragedies, within this test lies our greatest opportunity: As Muslims alive today, we have the unparalleled opportunity to engage in a struggle that was previously only carried out by Prophets and Messengers and their immediate followers; today we have the opportunity to re-establish the full implementation of the Message of Allah (swt) and restore the Deen of Allah (swt) to its rightful place.

It is incumbent upon us to study the life of the Prophet ﷺ in order to observe how he was able to transform a small group of powerless and persecuted believers in Makkah into the leaders of the greatest civilization brought forth to mankind. Not only is this an immense opportunity for reward from Allah (swt), it is also an obligation, as RasulAllah ﷺ tells us:

“Whoever dies without a Bay’ah (to the Khaleefah) upon his neck, died a death of Jahiliyya” [Hakim]

The “death of Jahiliyya” here indicates that being without a legitimate Khaleefah is prohibited. This makes the existence of the Khilafah obligatory, as agreed upon by all classical scholars, including Imam Al-Nawawi, Al-Qurtubi, Al-Juwayni, Al-Taftazani, Al-Dahlawi, and countless others.

The Promise of Allah (swt)

The return of the Khilafah is a promise from Allah (swt), prophesized by the Messenger of Allah ﷺ in a long hadith that describes the various political realities that this Ummah will be exposed to over the ages, including the oppressive rule we are living under today; this Hadith ends with:

May Allah (swt) make us among those honored with a role in fulfilling this promise of Allah (swt), so that it may be ransom for us on the Day of Judgment. May Allah (swt) unite this Ummah under the leadership of a rightly-guided Khaleefah who will implement Islam completely and with justice, establishing Dar Al-Islam on earth for the Muslims that will act as a beacon of light for the non-Muslims around the world.

“Their intention is to extinguish Allah’s Light with their mouths; but Allah will complete His Light, even though the disbelievers detest it.”