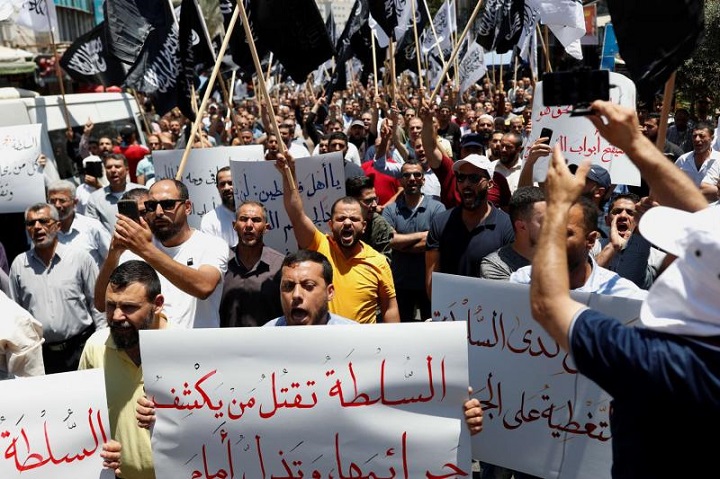 On Thursday, 24/6/2021, with all brutality and barbarism, the criminal Palestinian Authority’s apparatus attacked the political activist Nizar Banat at dawn. After his kidnapping, the Governor of Al-Khalil (Hebron), Jibrin Al-Bakri announced the news of his death.

This heinous crime is a liquidation and execution process of a political activist who addressed the crimes of the Palestinian Authority (PA) and its corruption with criticism and accountability. The authority committed this crime in an area that it enters only with security coordination with the Jewish entity. What made this execution crime even more heinous is that it was perpetrated after a speech by the betrayed in which he protested the (PA)’s spoiled coronavirus vaccines’ deal with the Jewish entity.

This crime does not target Nizar Banat individually, rather, it targets all those who hold the PA accountable for its crimes, shortcomings, and trading with people’s lives, honour and wealth. It targets all those who raise their voices in rejection of the crimes of the authority and who expose its criminals.

O People in the Blessed Land: The Palestinian Authority and the leaders of its security services will not stop their crimes against you, because they and your enemy are one of a kind, who continue to kill you and fight your Deen. Whoever surrenders the sanctities, the land, and coordinates security with the Jewish entity, and implements the policies of the enemies of Islam to destroy your children and families, can you be safe from his evil? Will he abstain from committing any crime?

O People in the Blessed Land: The Palestinian Authority is a malicious tree, and it is an extension of the Jewish entity and the puppet regimes in the Islamic world; no one can put an end to its crimes unless you stand in its face and raise your voice against its crimes. If you remain silent about its crimes, you will pay the price with your blood. And know that your steadfastness, proclaiming the truth, and your standing in the face of the oppressors and the traitors is what will open the doors of victory and relief for you, and perhaps Allah (swt) will honour us soon with the Khilafah Rashidah (rightly guided Caliphate) on the method of the Prophethood by which we establish the Deen and make the wrongdoers taste the consequences of what they did. So, proclaim the truth in the face of the oppressors and the traitors and fear no one on your path to Allah, and Allah is with you, He will not waste your reward.

“If you see my Ummah fearful, and does not say to the oppressor, O oppressor, then Allah (swt) abandons them.” [Narrated by Al-Hakim].