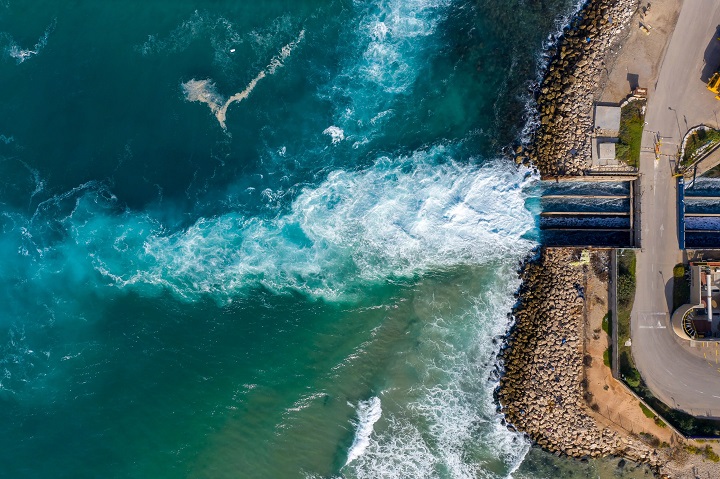 On 8/11/2022, on the sidelines of the Climate Summit in Sharm El-Sheikh, Jordan, the UAE and the Jewish entity signed a memorandum of understanding (MoU) to continue the feasibility studies and “engage in developing the necessary tools in plans in time for the COP28 conference” to be held in the UAE in November 2023, to establish two opposite, interdependent and linked projects; with the aim of establishing a water desalination plant on the Mediterranean Sea in exchange for the establishment of a clean electric power plant in Jordan. The signing of the memorandum came based on the declaration of intent signed by the three parties on the sidelines of the Dubai Expo last year, in the presence and mediation of US Presidential Envoy John Kerry.

Among the terms of the memorandum of understanding (MoU) and the previous declaration of intent are the following:

2- The Jewish entity will study the possibility of exporting 200 million cubic meters of water to Jordan, which will come from a specific desalination plant. It will be sold to Jordan at the current price, not the preferential price.

3- The UAE is financing and building a solar energy farm on Jordanian lands, and the Jewish entity will pay $180 million annually in exchange for that, to be shared by Jordan and the Emirates.

Regarding the signing of this memorandum with the usurping enemy, the Jewish entity, we state the following:

1- Axios website described this agreement as “the largest regional cooperation project ever between ‘Israel’ and its neighbours”, which was made possible thanks to the Wadi Araba Agreement and Abraham’s treacherous and normalization agreements. There is no room for denying that these regimes put the interest of this usurping entity and empowering it as a political strategy that undermines the interests of its people, betrays them to the core, and gives lowliness to their Deen.

2- Despite the false and misleading justifications for marketing these agreements to the people, in terms of their economic feasibility or Jordan’s urgent needs for them, such as the claim of poverty and scarcity of water resources, this agreement is absolutely political, its goal is to integrate the usurping entity in the region, and the people of Jordan as a whole reject these agreements and have expressed their anger and rejection of it, and they consider the Jewish entity the first enemy to them, with America and Europe behind it. They do not find any solution to deal with it except through jihad, as expressed by local official opinion polls a month ago.

3- The Emirates, which is the strongest Gulf ally of Jordan, could have built a water desalination plant in the Gulf of Aqaba that could supply Jordan with double what the Jewish entity intends to sell to Jordan. The desalination station on usurped land of Palestine makes the people of Jordan under the control and blackmail of the Jewish entity, who do not respect any kinship, agreement or a covenant with people, but it is the project of the colonial states to empower the Jewish entity. Allah (swt) says:

“Or have they a share of dominion? Then [if that were so], they would not give the people [even as much as] the speck on a date seed” [An-Nisa: 53].

5- Despite the misleading justifications and the reluctance to use renewable energy projects, the Jordanian Minister of Energy and Mineral Resources stated that the total capacity of electric power generation projects from renewable energy sources reached about 2526 megawatts at the end of last July, contributing about 29% of the electric energy generated since the beginning of 2022, which indicates that there is no need for a clean energy project with the Jewish entity, other than a policy of submission.

6- The agreement has nothing to do with reducing carbon emissions and the climate conference, even if it comes in its context and under pressure from John Kerry, the US Presidential Envoy for Climate. Rather, it is justifications for the entry of the Jewish entity into the system of Muslim countries and the exploitation of their resources under regimes that maintain their survival in implementing American and British dictates.

7- The issue is that the Jewish entity is a usurper and occupier and it is an enemy of the entire Islamic Ummah, and the practical measure towards it is treating it as an enemy and not recognizing or empowering it and normalizing relations with it through economic, security and other agreements. The legal procedure that the Ummah is obligated to follow towards it is to fight it and purify all of Palestine from it.

8- It is really unfortunate that the blind regimes of dependence do not see that the humiliation of the Jews is the fate that the one who bases his rule on the colonial kafir countries of the West, and implements their agendas with the Jewish entity the duty of those peoples is to spit them out, and that the Ummah will return to its project and its stance, a stance of glory and honour in front of this arrogant and hateful entity. Allah (swt) says:

“You will not find a people who believe in Allah and the Last Day having affection for those who oppose Allah and His Messenger.” [Al-Mujadila: 22].

It is not enough to express your rejection and anger at these treacherous agreements. The solutions are not derived from patching up the humiliating reality by making concessions here or there. Also, the solutions to the issues of the Ummah, including the Palestine issue, are not solved according to international law and according to the unjust, demonic international legitimacy. Rather, the radical solution is the solution that Allah (swt) commanded. It is the liberation of the land of Palestine from the clutches of the Jews by the force possessed by the armies of the Ummah, which will not be moved except by the Ummah’s return to its reunification under the Khilafah Rashidah (rightly-guided Caliphate) State on the method of prophethood. It is its global project for the return of truth, justice and mercy to the Islamic Ummah and the world at large, after the oppression and brutality of the kafir colonial states had become so widespread and affected all of humanity.

“Allah only forbids you from those who fight you because of religion and expel you from your homes and aid in your expulsion – [forbids] that you make allies of them. And whoever makes allies of them, then it is those who are the wrongdoers” [Al-Mumtahina: 8]