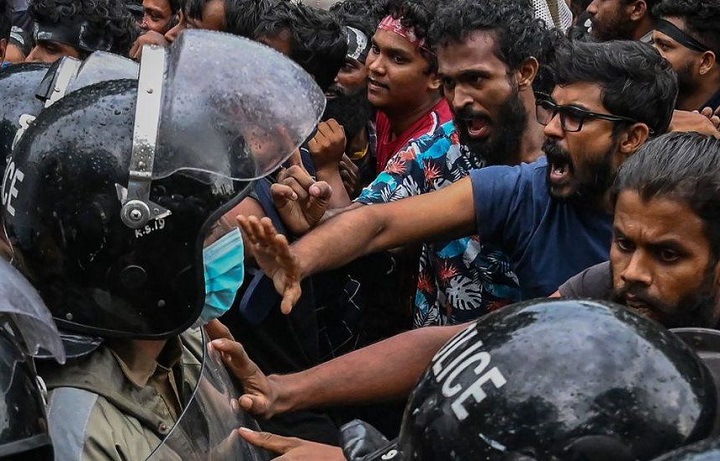 On Sunday 3rd April, 26 cabinet ministers of the Sri Lankan government resigned due to increasing public anger and protests over the country’s huge financial crisis. The nation’s foreign currency reserves have plummeted in this import-dependent state by around 70% since January 2020 to $2.3 billion in February due to financial mismanagement and the Covid pandemic which hurt the country’s tourist industry and foreign remittance, leaving the government struggling to pay for the imports of vital necessities. Consequently, the people have faced severe shortages of food, fuel, gas, medicines and other essentials, as well as crippling 13 hour power cuts and spiralling costs of basic needs. The Sri Lankan rupee depreciated 40% against the dollar in one month, and the inflation rate is crossing 17%, while food inflation hit an eye-watering 30% in March. Millions within the country are struggling for financial survival, with many unable to afford two basic meals a day. Meanwhile, in Britain, the world’s fifth richest country, protests also took place across the country on Sunday 3rd April against the cost-of-living crisis, resulting from soaring rises in gas and electricity costs coupled with a huge increase in fuel and food prices, as well as a rise in National insurance tax, council tax and other bills. The jump in household bills is the biggest in living memory, with energy costs rocketing by 54% to around £2000 a year. This has pushed many into poverty and struggling to feed themselves and their families, and left millions with the impossible choice of “eating or heating” – having to choose between eating a meal or heating their homes, sometimes during freezing temperatures, due to lack of funds.

Comment:
The nature of the economic crisis affecting Sri Lanka and Britain may differ, but the immense toll on the lives of ordinary people is similar, as is the root cause of this human misery – the capitalist system and its laws and policies which create boom and bust economies which exist on a thread.

In Sri Lanka, no doubt government mismanagement of public funds and poor economic decisions has played a large part in the country’s current woes. However, the country’s capitalist debt-based economic model that sought to develop the country through huge interest-based loans from foreign states, primarily from China in recent years, is the root cause of this current economic crisis. In the early 2000’s, the Sri Lankan government turned towards China to fund many of its infrastructure projects. China invested $12 billion in such projects between 2006-2019, which effectively mortgaged the country to Beijing. Due to being unable to pay back its loans, the Sri Lankan government took out other interest-based loans to pay China back, causing its foreign debt to spiral out of control. Sri Lanka’s public debt was estimated to be 119% of its GDP in 2021. This year alone, the country has $7 billion worth of foreign debt to repay, while its foreign currency reserves only stand at around $2 billion. Consequently, the government is seeking a bailout from the IMF, whose capitalist free-market policies is fraught with its own disastrous consequences, as experienced by many nations in Africa, South America and Asia. The capitalist IMF body has turned nations into loan addicts, while impoverishing the people through its structural adjustment programs that cut government spending on education and health care, increased cheap exports of the natural resources of countries, and caused the destruction of local industries through the manipulation of economies to import more foreign goods – all of which enriched western nations, while strangulating the economies of poorer states and pushing them into further debt.

Britain is state whose economy is also based on huge interest-based borrowing and debt – £2.3 trillion as of February 2022 – around 95% of its GDP (ONS). Furthermore, the huge rise in living costs for the people is in large part due to the high energy and fuel costs imposed by multibillion dollar companies who continue to make huge profits while ordinary citizens suffer financial hardship. In fact, the oil giant BP stated that it has “more cash than we know what to do with” after making almost £10 billion profits in the previous year, while, the energy company Shell recorded their best quarterly profit in 8 years in the final quarter of 2021, having made an incredible £14.2 billion profit over the year. It is the capitalist system which allows the privatisation of natural resources such as oil and gas that has enabled these businesses to effectively hold nations to ransom in exchange for them receiving what are basic needs, under its liberal banner of freedom of ownership.

The economic woes, crippling poverty, and financial insecurity affecting millions within these states is mirrored within lands across the world under the dark shadow of the toxic capitalist system. It is a stark reminder of why the world is in dire need of an alternative system to stand as a model of how to sincerely take care of the needs of mankind in a just and sound manner. It is Islam that offers this alternative. The Islamic economic system for example rejects interest and the debt-based economic model of growth; it prohibits the hoarding and monopolisation of wealth and obliges its effective distribution such that all enjoy a dignified standard of living; it is based on a low taxation system and prohibits the introduction of new non-Shariah based taxes by those who rule; and it prohibits the privatisation of natural resources such as oil, gas and water, rather defining them as public property, such that the revenue generated from them should benefit all, and preventing burdening fees on access to these resources, according to the hadith of the Prophet (saw):

“Muslims are partners in three things: in water, pastures and fire.”

Governments of the world are clueless about how to solve the economic problems of their people in a just manner that secures prosperity for all. This is inevitable under any man-made system. Only a divine system where the laws are from the Creator of humankind can deliver a just and sound economic system. This can only be implemented effectively under the System of the Lord of the worlds – the Khilafah (Caliphate) based upon the method of the Prophethood.