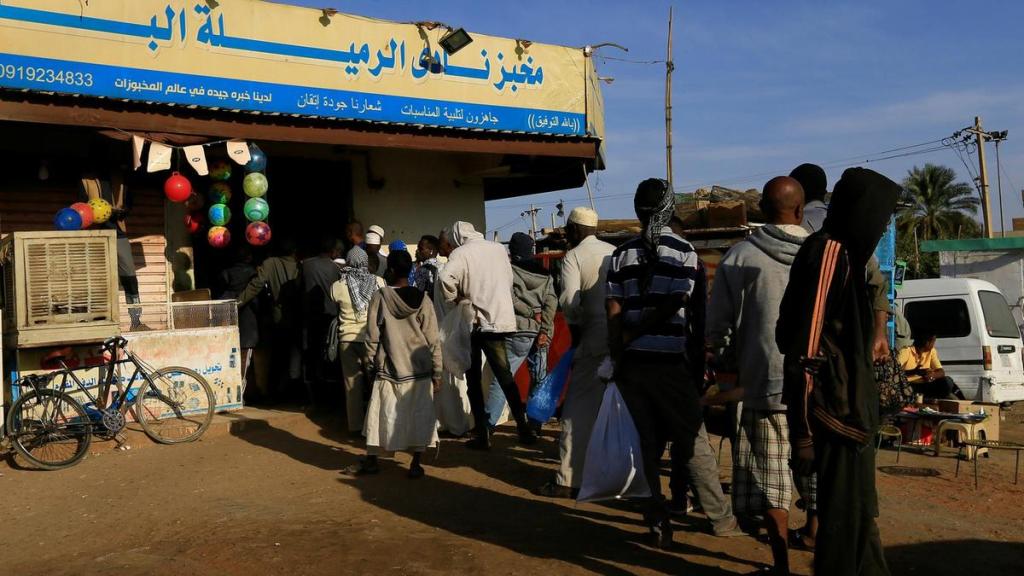 In queues stretching for several kilometres, people stand for long hours to get a piece of bread, a litre of fuel, or a gas cylinder, and when they obtain it, people pay a high price to buy it; so, between the anvil of high prices and the hammer of the scarcity of so-called strategic commodities, people’s lives have become an unbearable hell, at a time when the government concluded, on Monday, 28/09/2020, the economic conference, through which it wanted to provide a popular umbrella for its failed policies, as the Acting Minister of Finance Heba Muhammad Ali said in her press conference regarding the economic conference: “The reasons for holding the economic conference are to involve all stakeholders in their various systems, in setting policies and making decisions for the purpose of making a national project, which has the largest popular umbrella that supports it to succeed and continue.”

Instead of the conference outcomes coming to the benefit of the country’s people, thus lifting the hell of high prices and scarcity from them, which have failed large sectors of the people of the country to provide for their basic needs, the outputs come in reality to take the green light to continue increasing prices, under the banner of the so-called lifting subsidies, as stated in the recommendations of the conference: “Commodity subsidies represent a burden on the budget and the trade balance, also, the rural population does not benefit from it, especially subsidies to electricity and cooking gas. These reasons require to convert to direct cash support”, (Sudan Tribune). Although the recitation of this recommendation was met with strong rejection and chants from the attendees, the government is continuing to tame the people through crisis making, to pass its budget amendment, and to continue to implement the dictates of the Kafir West; the prescription of the International Monetary Fund (IMF), and wasting the country’s wealth to satisfy the Kafir colonialist. At a time when the bread crisis is exacerbating, claiming that the debts of flour mills amounted to 20 million dollars, (BAG News), and the electricity is cut off for hours every day, claiming that the sector needs 161 million dollars for maintenance, according to a statement by the Director of Sudan Electricity Holding Company, (Sudan Tribune), and the government is unable to pay the wheat and fuel bills, at this time Prime Minister Hamdok announces: “That the amounts required to compensate for the bombings of the American embassies in Dar Al-Salam and Nairobi, and the destroyer USS Cole are ready for payment!” (Sudan Tribune), noting that these amounts are more than 400 million dollars; of which 335 million dollars for the two embassies, and 70 million dollars for the destroyer Cole, and the Almighty has truthfully said: وَلَا تُؤْتُوا السُّفَهَاءَ أَمْوَالَكُمُ الَّتِي جَعَلَ اللَّهُ لَكُمْ قِيَاماً “And do not give the weak-minded your property, which Allah has made a means of sustenance for you.” [An-Nisa: 5]!!

In its economic conference, the Transitional Government brought together the gathering to give the alleged popularity to deliver a coup de grace on the poor people of Sudan, and to push more people into poverty, in compliance with the IMF’s prescription!!

The Transitional Government, with its civil and military parts, will not solve a problem for you, for all of them are committed to taking care of the interests of the Kafir colonialist, and applying the brutal capitalist system that creates poverty and kills the poor, and have nothing to do with the interests of the people, as they are the agents of the Kafir colonialist, working day and night to satisfy him, and they recycle the same old treatments, to increase people’s life of misery, depression, and distress, and Allah Almighty has truthfully said: وَمَنْ أَعْرَضَ عَنْ ذِكْرِي فَإِنَّ لَهُ مَعِيشَةً ضَنْكاً وَنَحْشُرُهُ يَوْمَ الْقِيَامَةِ أَعْمَى “And whoever turns away from My remembrance – indeed, he will have a depressed life and We will gather him on the Day of Resurrection blind.” [Ta-Ha: 124]

Liberation from the yoke of the colonizing Kafir, and from its agents, will only be by the great system of Islam, applied by the second Khilafah Rashidah (rightly-guided Caliphate) state on the method of Prophethood, led by divine leaders who rule the subjects according to the provisions of the righteous law, they hold themselves accountable for the motive of piety, and the ummah will hold them accountable for their performance if they wrong, or fell short in taking care of their affairs. These leaders will cut off the hand of the Kafir colonizing West, and remove the shackles from the Ummah; the man-made legislation, the levies that impoverish it and prevent it from its countless resources and wealth, then the situation will turn, Allah willing, to be once again the best nation that has been brought out to the people, and this is going to happen in the near future with the will of men, and the success from Allah and the truthfulness of his promise, glory be to Him, so be among them, and do not miss the honour of being devoted in the work to establish the Khilafah, or to support it, for in that is the prosperity of this world and the Hereafter.