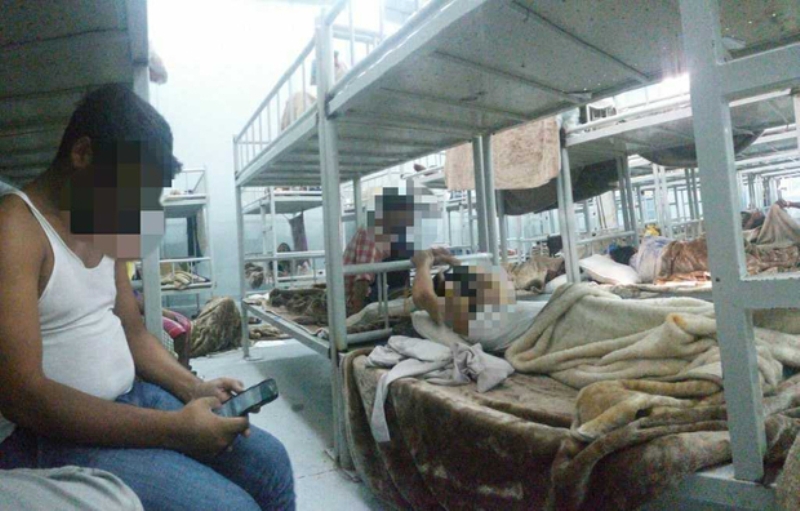 Hundreds of Rohingya Muslim women and children, who fled the genocide and mass rape by Buddhist extremists in Myanmar, continue to be detained indefinitely in Saudi Arabia’s Shumaisi Detention Centre, after seeking sanctuary in the state. Some have been imprisoned for more than 5 years after they entered the country – for having alleged invalid travel documentation. It has been reported that some Rohingya women who were arrested by Saudi authorities while pregnant, were forced to deliver their babies in detention. According to statements from detainees, they suffer from cramped and intolerable living conditions in the centre. This, along with prolonged detention has caused mental illness amongst many of the Rohingya detained, while others suffering from various illnesses such as malaria, diabetes and fungal infections have not received appropriate treatment. Earlier this month it was reported that the Saudi regime deported dozens of Rohingya refugees to Bangladesh and that it plans to deport dozens more. They will either face imprisonment by the criminal Hasina’s government or be subjected to life in the deplorable “death camps” in Cox’s Bazaar which are not even fit for animals!

It is the rancid disease of nationalism that breeds such inhumanity and that causes the Saudi regime to treat their persecuted Rohingya Muslim brothers and sisters as foreigners and criminals, simply because they come from a different country, rather than giving them sanctuary and providing for their needs as obliged by Islam, for the Prophet ﷺ said, «الْمُسْلِمُ أَخُوْ الْمُسْلِمِ، لا يَظْلِمُهُ، وَلا يَخْذُلُهُ» “A Muslim is the brother of a Muslim: he does not oppress him, nor does he abandon him.” It is utterly despicable that the Saudi regime is willing to spend billions of dollars to slaughter and starve the Muslims of Yemen but is unwilling to provide the persecuted Rohingya Muslims a safe haven and a decent standard of living. Indeed, it is not the Rohingya who should be treated as criminals but the rulers of Saudi, Bangladesh and the rest of the Muslim world for their crimes against this Muslim Ummah – including the abandonment of the oppressed Muslims.

The Rohingya are not foreigners in this land, for this is the land for the whole Muslim Ummah…and not the property of tyrant monarchs to decide which nationality of Muslim should enter or not! This is the land described as sacred by Allah (swt), the land which is the birthplace of Islam, and the land which the Prophet ﷺ established the Islamic State upon. The Rohingya Muslims, and indeed any Muslim should be able to enter it and reside without fear of facing a new chapter of persecution. That which is foreign in this land is the agent regime supported by the Western colonialist and the rule applied by the desires of despots which is fully unrelated to Islam and manifest in these nationalistic policies taken from the Kaffir West, for the Prophet ﷺ said regarding nationalism, «دَعُوهَا فَإِنَّهَا مُنْتِنَةٌ» “Leave it. It is rotten.”

O Muslims! The oppressed Muslims will have no sanctuary, no defense of their lives and property, and no dignified life under these nationalistic regimes and agent rulers who govern over our lands, for they care nothing for stopping the bloodshed and safeguarding the honour and wellbeing of this Ummah. Rather they are the ones who have made it their mission to fulfil the agenda of their western masters to keep this Ummah divided through their false colonial-imposed nationalistic borders and nation-state identities which has led to Muslims abandoning, killing, imprisoning and refusing protection to their Muslim brothers and sisters. We must uproot these rotten regimes and their manmade laws and establish urgently the Khilafah (Caliphate) based on the method of the Prophethood which will be the true guardian and shield of the Ummah. It will remove the false nationalistic borders which divide the Muslims and unite all our lands under one banner and one ruler. It will also defend the sanctities of the Muslims and offer them sanctuary and provide them with all their needs – regardless of their race, ethnicity or land of origin – for this is the Order of Allah (swt). The Prophet ﷺ said, «إِنَّمَا الْإِمَامُ جُنَّةٌ يُقَاتَلُ مِنْ وَرَائِهِ وَيُتَّقَى بِهِ» “The Imam (Khalifah) is a guardian and he is responsible for his subjects.”