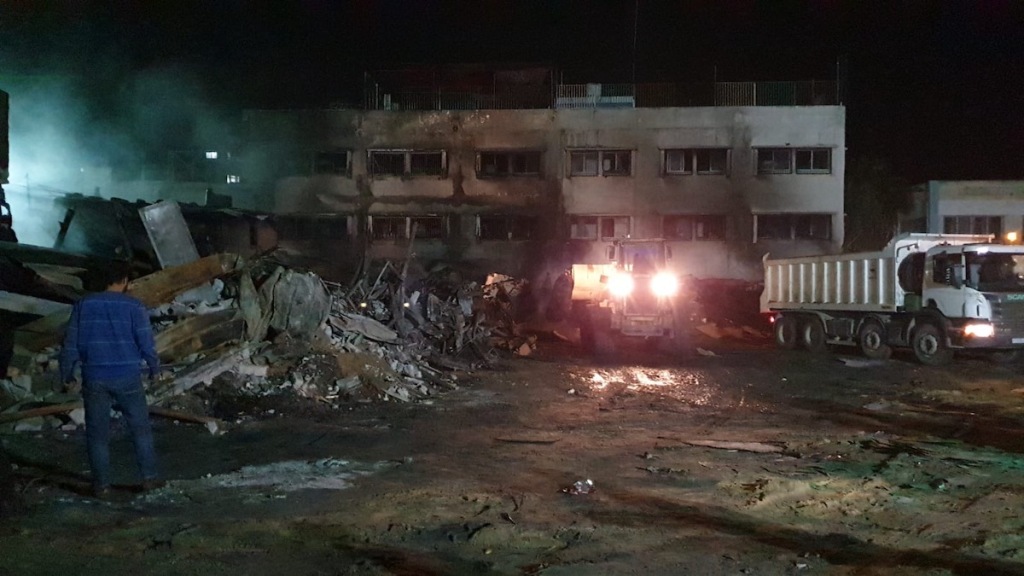 The eyes weep, and the heart is humbled, and we are for what happened are sorrowful, but we only say what satisfies our Lord إِنَّا للهِ وَإِنَّا إِلَيْهِ رَاجِعُونَ “We belong to Allah and to him we shall return”. May Allah increase our reward and we ask Allah to give mercy to the victims, cure for the injured and to better compensate them in their wealth, and to grant patience and solace to their families and loved ones.

A closer look at the tragedy that occurred in Nuseirat Camp reveals a state of recklessness and inadequacy, lack of preparedness or willingness of the Gaza Authority to prevent or respond to such incidents. According to the Nuseirat Municipality statement, safety and security standards were not achieved in the bakery in which the fire occurred. The National Professional Committee gave the bakery owners two weeks to correct their conditions! Is it reasonable to leave this time bomb to explode for two weeks?! The basic principle in Islam is that the damage is eliminated immediately, especially if it is at the level of risk carried by a gas tank that contained 1340 kg, in a densely populated area (residents and bystanders). Preserving people’s lives is first and more important than collecting licensing fees or any other consideration, and it cannot be left to possibilities. The fire surprised everyone, and the owner of the facility was not helped by the period granted to him, so any excuse made by the municipality or the responsible bodies in the Gaza Authority is unacceptable regarding the negligence, and in front of this tragedy, and any justification that it is Allah’s qadaa’ and qadar, and it is the truth, does not absolve anyone from responsibility.

Taking charge of looking after people’s affairs necessitates the complete readiness and preparedness from every harm that can befall them. The negligent are accountable to Allah and to His servants. Al-Farooq Omar feared Allah’s accountability for not leveling the ground making the cattle trip over in Iraq. What will be the penalty of turning a blind eye to the safety measures, and one who is late in transporting the injured and in extinguishing fires? Were it not for Allah’s compassion first, then the ordinary people and the owners of the concrete companies rush to put out the fire and transport the injured in their private cars, the worse could have happened.

What happened is a clear and apparent failure from the Gaza Authority, it is its duty to provide care, the most important of which is safety and safety for people, instead of paying attention to collecting fees, activating collection of taxes and prosecution procedures, and improving revenues with arguments and justifications that the people do not see a realistic translation of it in their lives.

In this context, we raise the alarm about other time bombs in all assembly areas in every sector, such as gas stations, bakeries, and others, without favoring capital, private or partisan interests or those with influence at the expense of preserving people’s lives and property. The Messenger of Allah, peace and blessings be upon him, said: «لَا ضَرَرَ وَلَا ضِرَارَ، مَنْ ضَارَّ ضَارَّهُ اللَّهُ، وَمَنْ شَاقَّ شَاقَّ اللَّهُ عَلَيْهِ» “Do not cause harm or return harm. Whoever harms others, Allah will harm him. Whoever is harsh with others, Allah will be harsh with him.”

And if there is a word of gratitude and appreciation, we direct it to the people, and private companies such as concrete companies, and freshwater filling companies, without which, after Allah’s care, no one would have known how much damage would have resulted from this fire. Allah’s Messenger ﷺ said, «أَلَا كُلُّكُمْ رَاعٍ، وَكُلُّكُمْ مَسْئُولٌ عَنْ رَعِيَّتِهِ، فَالْأَمِيرُ الَّذِي عَلَى النَّاسِ رَاعٍ، وَهُوَ مَسْئُولٌ عَنْ رَعِيَّتِهِ…» “Surely! Everyone of you is a guardian and is responsible for his charges: The Imam (ruler) of the people is a guardian and is responsible for his subjects…”.