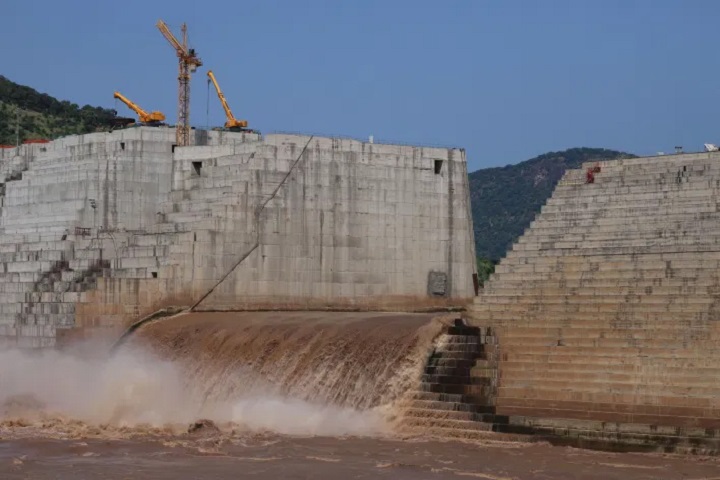 On Tuesday, 07/06/2021, Ethiopia informed Sudan of implementing the second filling of An-Nahdha Dam lake, with an amount of 13.5 billion cubic meters of water, which is causing damage to Khartoum’s vital facilities and the lives of 20 million residents, according to official statements.

It has become known to the public opinion in Sudan and Egypt, the magnitude of the catastrophic risks of the An-Nahdha Dam, this dam that was built in an earthquake zone; the great groove, and it is built on a crackable concrete base, only 20 kilometers from the Sudanese border, 127 meters higher than Khartoum, 505 meters above the surface of the earth, and the huge amount of water reaches 74 billion cubic metres, which made many experts say that if it explodes, it is a bomb that will destroy Khartoum and all the cities on the Blue Nile in hours as a result of the great flood. And this was confirmed by the Director of the Engineering Department in the Ethiopian Ministry of Defense, General Buta Bachata Debele in an interview with the Russian RT Channel, on Friday, 25/6/2021, where he said: “If the dam is destroyed, you will not find neither Sudan nor Egypt, as the flood will sweep them into the Mediterranean Sea,” and he stressed that “after the second filling, everyone will come to the negotiating table, believe me because it is huge (the dam); 13 billion cubic meters.” But despite these dangers, the two governments in Egypt and Sudan colluded by procrastination, giving the Ethiopian regime enough time to build the dam and complete the first filling and then start the second filling, and making media statements for internal consumption without taking any serious and strong position that obliges Ethiopia to stop this catastrophic threat. On Wednesday 07/07/2021, “Egyptian President Abdel Fattah El-Sisi warned Ethiopia of the danger of conflict over An-Nahdha Dam.” And “Prime Minister Abdullah Hamdok said that the Grand Ethiopian An-Nahdha Dam carries real risks if a binding legal agreement is not reached regarding filling and operation, and stressed that the risks to Sudan are greater than Ethiopia, where the dam is located on its borders, and to Egypt, which is thousands of miles away from it.” (BBC 04/08/2021)

Dozens of absurd negotiation rounds failed to make any progress in this file, until the dam was about to be completed and turned into a time bomb, and in the same way, to give Ethiopia enough time to fill the dam. Today’s Security Council session comes at the request of Sudan and Egypt, which the President of the Security Council, Nicolas de Riviere, himself underestimated and confirmed its uselessness, who said on 01/07/2021: “The Security Council does not have much that can be done in An-Nahdha Dam crisis, except to bring the parties together to express their concerns, then encourage them to return to negotiations to reach a solution!”

We in Hizb ut Tahrir / Wilayah of Sudan warn these complicit agent governments not to remain silent about these real dangers that they have admitted, and we hold them responsible for any damage to lives or property caused by this dam on the people of the country, and we assure our people in Sudan and Egypt that these national governments are only a tool in the hands of the colonialists, not to be given authority or pledge. There is no solution for us except by establishing the Khilafah Rashida (Rightly-Guided Caliphate) of Islam upon the method of Prophethood, for if we had a Khaleefah (Caliph), no one would threaten us, neither with the dam nor with anything else. The Prophet (saw) said: «إِنَّمَا الْإِمَامُ جُنَّةٌ يُقَاتَلُ مِنْ وَرَائِهِ وَيُتَّقَى بِهِ» “Verily, the Imam (Khaleefah) is a shield, behind whom you fight and from behind you protect yourselves” [Muslim]. So, let the people of Sudan and Egypt work for the Khilafah Rashida (Rightly-Guided Caliphate) upon the method of Prophethood, for it is the only way out and our salvation.