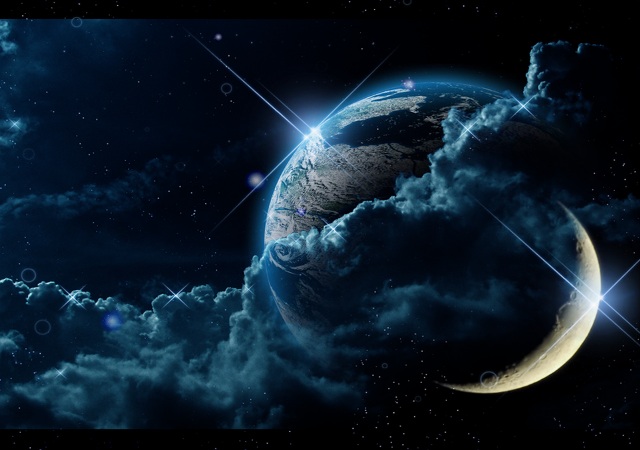 The Mufti of Tunisia came on Monday night to declare that the crescent-moon of Shawwal could not be sighted and that Tuesday is the 30th of Ramadan. Is it true that the moon could not be sighted? The reality is that many trusted Muslims sighted the moon in different places in the Muslim countries, and based on that Tuesday is confirmed the first day of the blessed Eid ul-Fitr.

O Muslims : The Truth is clear, the Prophet ﷺ said:«صُومُوا لِرُؤْيَتِهِ وَأَفْطِرُوا لِرُؤْيَتِهِ، فَإِنْ غُمَّ عَلَيْكُمْ فَأَكْمِلُوا الْعِدَّةَ ثَلَاثِينَ» “Observe Saum (fast) on sighting the crescent and terminate it on sighting it (the new moon), but if the sky is cloudy before you, then complete the number (thirty days) of the month.”

And the speech in this Hadith(صوموا… وأفطروا)  (fast and terminate your fast) is for all Muslims, there is no difference between a Tunisian, a Moroccan, an Algerian, a Mauritanian, or between a Tunisian, Indonesian, Turkish or Egyptian … The sighting of any Muslim (attesting that there is no god but Allah and that Muhammad is the Messenger of Allah) of the Ramadan moon or the Shawwal moon makes it binding on all the Muslims to fast or break the fast. There is no difference between a country and a country, and not between a Muslim and a Muslim, because whoever sights the crescent moon from Muslims stands as the evidence against those who did not sight it. It was narrated that Ibn ‘Abbas said: «جاء أعرابي إلى النبي صلى الله عليه وآله وسلم فقال: رأيت الهلال، فقال: أتشهد أن لا إله إلا الله وأنّ محمداً رسول الله، قال: نعم، فنادى النبي صلى الله عليه وآله وسلم أن صوموا» “A Bedouin came to the Prophet and said: ‘I have sighted the crescent.’ He said: ‘Do you bear witness that there is none worthy of worship except Allah, and that Muhammad is His slave and Messenger?’ He said: ‘Yes.’ So the Prophet gave the call saying: ‘Fast.”‘

Ibn ’Umar (ra) narrated «تراءى الناسُ الهلال، فأخبرتُ رسول الله صلى الله عليه وسلم أَني رأيته، فصامه وأمر الناس بصيامه» ‘The people were trying to sight the new moon (of Ramadan.) and when I reported to the Messenger of Allah (ﷺ) that I had seen it, he fasted and commanded people to fast.’

And saying that the crescent-moon if sighted in an Islamic country therefore all Muslims in other countries must fast, even if the people in a certain country do not sight it, whether the country is close or far, this is famous in the Maliki schools, attributed by Ibn Abdul Bar in his book “Al-Iztizkar” by Imam Malik, reported by Ibn al-Qasim and the Egyptians, according to Al-Malikiyah (school), that when the sighting of the crescent-moon is established in a region, the people of the other regions must follow it in their fast and breaking their fast when they receive a confirmed result from an authenticated source. Therefore if the saying that that sighting of a country is binding for the rest of the Islamic country is the correct statement according to the Malikis, who are the pioneers of this statement, so why is the state and the Mufti disagree with it and are going against it, and they are the ones who always claim that they follow the Maliki school of thought?!!

O our People in Tunisia: The Truth is best to be followed and you know it, and these misguided states are not sufficed by tampering with your destiny, they handed the country over to your enemy, and extended their hands to tamper with your worships. These quasi-rulers have cooperated in every sin and have worked “sincerely” to tear up the Islamic Ummah, disperse you, and corrupt your lives, and even your worship because they follow the colonialists, and here you see them distance themselves from Islam and divert from the explicit judgments of Allah. And use the government scholars to pass the fatwas they want.

O Muslims: Your fasting is worship and breaking your fast is worship, rather your whole life is worship to Allah (swt), and remember that you will return to Allah, and will be resurrected and accounted, do you then obey the rulers who rejected your Deen and tore up your country apart?!

There is no obedience to a creature in the disobedience of the Creator. The duty today is to complement your worship of your Lord by making the whole system an Islamic system implemented by the Khilafah Rashida (Righteous Khilafah) on the method of Prophethood, which will unite the Muslims together in one state and unite their fasting, the end of their fasting and their rituals, by which they will get the glory in this world and the Hereafter. Allah (swt) says: وَلِلَّهِ الْعِزَّةُ وَلِرَسُولِهِ وَلِلْمُؤْمِنِينَ وَلَٰكِنَّ الْمُنَافِقِينَ لَا يَعْلَمُونَ “And to Allah belongs [all] honor, and to His Messenger, and to the believers, but the hypocrites do not know” [Al-Munafiqoon: 8]