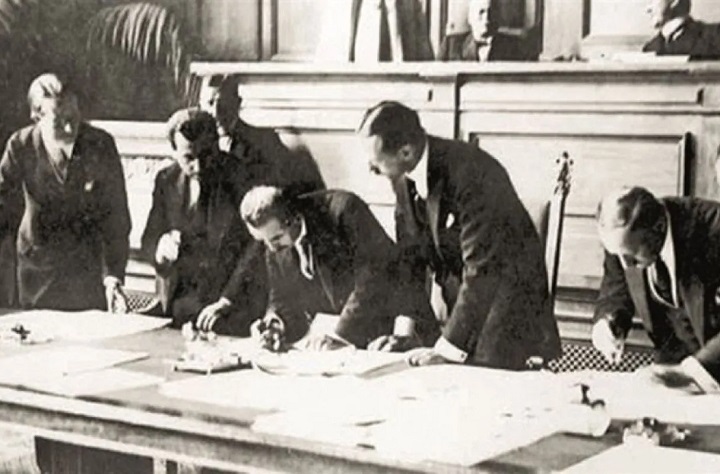 On Monday, 28th Rajab 1342 AH, corresponding to 3rd March 1924 CE, Mustafa Kemal committed the crime of abolishing the Khilafah (Caliphate), establishing a secular republic on its ruins, separating religion from the state, and expelling the caliph from the country under the sponsorship and supervision of the British military commander Harrington, and British Foreign Secretary George Curzon. By a decree he submitted to the National Assembly, asking Europe to recognize the new republic. So, the European countries rushed to recognize Turkey’s independence on the 24th July of the same year in accordance to the Treaty of Lausanne, according to which the British occupation forces withdrew from Istanbul, the capital and the straits. The British military commander Harrington left Turkey, British Foreign Minister Curzon said before the British House of Commons: “The issue is that Turkey has been destroyed, and it will not exist, because we have eliminated the moral force in it: the Caliphate and Islam.”

The demolition of the Khilafah is a grave event, and it is undoubtedly considered a dangerous turning point in the life of the Islamic Ummah. Before this event, Muslims were living under the shade of Dar ul Islam (Abode of Islam). Those who did not live in the Islamic State were able to move to the State to live as its subjects [citizens], to enjoy the Islamic way of life, and remove the sin from their necks by implementing obligation of having a pledge of allegiance to a caliph, in compliance with what the Prophet (saw) said:

“He who dies without having taken an oath of allegiance will die the death of Jahiliyah (in sin).”

After the demolition of the State, no Muslim was able to adhere to and abide by the obligation to live in Dar ul Islam, and integrate into the Muslim community. Therefore, the memory of the destruction of the Khilafah is a sad and painful memory because it relates to the demolition of the greatest State known to mankind. With its demolition, international concepts based on principles, high values ​​and ethics fell, and were replaced by international concepts based on interests, whims and materialism. Also, the demolition of the state of Islam means the demolition of the entity that was established at the hands of the Messenger of Allah (saw), after the Dawah, suffering and struggle for 13 years, during which he and his companions were subjected to various kinds of torment and harm. Matters reached the level of kufr tribes and parties conspiring to kill him (saw). This did not stop him from continuing his call and his struggle until he reached the abode of victory (Nusra) and support, where he (saw) established the entity and State for Islam.

Although the calamity of the destruction of the Khilafah is the mother of calamities, there is something more sinister and more dangerous than all of this, it is the calamity of the Islamic Ummah’s forgetting this painful memory and its ignorance of its danger. And that this ignorance of the importance of the Khilafah and the great calamity of its demolition continues. It also includes the ability of the kaffir West and its agents to distort the idea and image of the Khilafah and distract the sons of Muslims from it, and even make them reject it and repel it, and stand in front of those who work to restore it. Rather, the situation of the kaffir West has reached the point of making the idea of the Khilafah the subject of farcical conversations among Muslims and in education and media curricula. Therefore, every Muslim must work or support its restoration, and the implementation of Islam, and raising its flag and restoring its honour, because the obligation of the group (kifayah) is an obligation on every Muslim until it is established.

Islam is Allah’s Deen, and to Him (swt) Alone belongs the rule and sovereignty. Islam cannot exist without the Khilafah State. And every rule other than Islam is injustice, oppression and hardship. The rule by Islam, and every call for the Islamic rule will only be through the Khilafah and nothing else, no matter how different the titles of this call and its names, that is why the West launched its war on Islam under the name ‘the war on terrorism’. This obliges the Muslims to redouble the work and exert their efforts in this struggle, and to make more members of the Ummah join them to establish the Khilafah State. Hizb ut Tahrir took it upon itself to work in the Ummah and with it to establish this great duty, it is commemorating the 101st anniversary of the demolition of the Khilafah state, not to mourn or to lament, but to work to restore it, and to show the Ummah that restoring the Khilafah is a great obligation, that is mentioned in many of the noble verses and Prophetic Hadiths. Including Allah’s (swt) saying:

“He who throws off obedience will meet Allah on the day of resurrection without possessing any plea, and he who dies without having taken an oath of allegiance will die the death of Jahiliyah (in sin).”

Hizb ut Tahrir also commemorates this anniversary for its realization that the vital issue for Muslims in the whole world is to restore the rule by what Allah (swt) has revealed, by establishing the Khilafah by appointing a caliph for the Muslims to be given the pledge of allegiance, to rule by the Book of Allah (swt) and the Sunnah of His Messenger (saw), to destroy the systems of disbelief, and to put the rules of Islam in their place, in application and implementation, and transforms the Islamic lands to Dar ul Islam (the abode of Islam), and the society therein to an Islamic society, and carries Islam a message to the whole world by Dawah and jihad. The time has come for Muslims to work to find a caliph for them to restore the history of the conquerors who achieved victories, such as Badr al-Kubra, the conquest of Makkah and Qadisiyah, the conquest of Amoriyah, the Battle of Tours, the conquest of Andalusia, Ain Jalut, the conquest of Cyprus, the conquest of Belgrade and many others. Shouldn’t Muslims repeat the biography of Salahuddin, may Allah have mercy on him, who liberated Al-Aqsa Mosque from the Crusaders?! Shouldn’t the Muslims repeat the biography of Al-Mu’tasim, who heard the cry of a woman from the prison of Amoriyah, asking for help, saying, “O Mu’tasim”, Al-Mu’tasim heard the news and hurriedly prepared the army and opened Amoriyah! Who will restore the Ummah’s status? And who will restore the Ummah’s pride? So rush for this glorious work, Allah (swt) says:

“It is those who hasten to good deeds, and they outstrip [others] therein” [Al-Mu’minoon: 61]. And Allah (swt) says:

“Those will have [all that is] good, and it is those who are the successful. (88) Allah has prepared for them gardens beneath which rivers flow, wherein they will abide eternally. That is the great attainment” [At-Tawba: 88-89].

The crisis intensification heralds its end, and this hardship that almost surrounds us from every side must motivate us to make every effort and strive to take the means leading to the goal, no matter how long and intensified the road is. Allah’s commodity is expensive, and Allah’s commodity is Paradise, and Paradise is surrounded by hardships, and the crown of obligations deserves the sacrifice of every precious thing. The Khilafah will not be established alone, but with the help of the true believers, and we are determined, Allah willing, that we will not leave any legitimate means to take and use with seeking of Allah’s help. May Allah give us ease soon, and this is easy for Allah to accomplish. We are working and aspiring for the Khilafah, our hearts are yearning for it, we are all reassured of its establishment, for the Messenger of Allah (saw) informed us of that and gave us the glad-tidings «ثُمَّ تَكُونُ خِلَافَةً عَلَى مِنْهَاجِ النُّبُوَّةِ»“Then there will be Khilafah on the method of Prophethood.”

All of this is true to sharpen the determination, strengthen resolve, and open hearts.