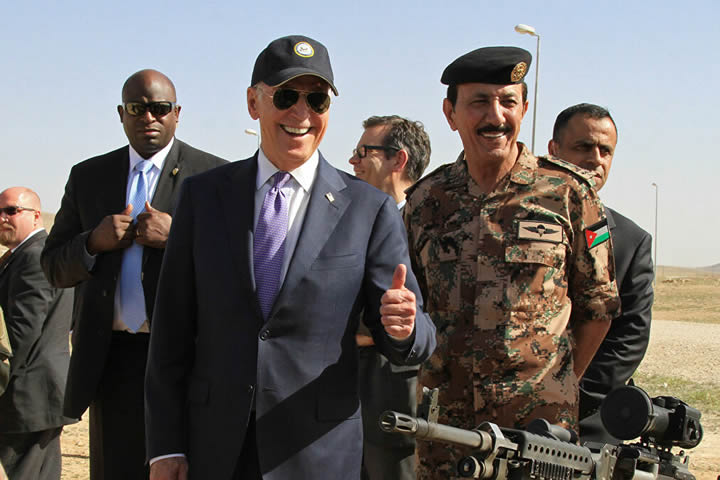 Its Ruling is Forbidden in Shariah, and Describing it as a Reality is a Crime

The official gazette of the regime in Jordan published the text of the Defense Cooperation Agreement between it and America, and the agreement was signed on 31/1/2021 and the government approved it on 17/2/2021, despite the fact that Allah (swt) has forbidden Muslims to take the Jews and the Christians as their allies and supporters, Allah (swt) says:

“O you who have believed, do not take the Jews and the Christians as allies. They are [in fact] allies of one another. And whoever is an ally to them among you – then indeed, he is [one] of them” [Al-Ma’ida: 51].

Despite this, this regime refused but to support America, the enemy of Islam and Muslims, after it allied Britain and the Jewish entity before that.

By reviewing the terms of this agreement, we find that the regime in Jordan has placed its military bases, airports, the port of Aqaba, and lands in Jordan at the disposal of America and its military air, land and sea forces, to use them in a manner that achieves America’s plans and goals in the region.

As for the rule of Islam in this military agreement, it is absolutely forbidden, for these agreements, treaties and military alliances between Muslims and other kaffir countries are all forbidden and void in Shariah, and Muslims are not bound by them even if their ruler, Ameer Al-Mu’mineen conclude it, because it contravenes the rules of Shariah, and the Messenger has forbidden getting aid from the kuffar as an entity and as a state,

It has been mentioned in the hadith of Ad-Dahhak that the Messenger of Allah went out on the day of Uhud, so he (saw) saw a Hasna (impressive) battalion or he said: “Khashina” (powerful). He (saw) said: “Who are these?” They said: such-and-such Jews, and he (saw) said:

“We do not seek the help of the kuffar (disbelievers).”

And he (saw) said in another Hadith:

“We do not seek the help of the Mushrikeen (polytheist).”

And the prohibition was mentioned in the authentic Hadith about fighting under the banner of the kuffar or under their command. Ahmad and Al-Nasa’i narrated that Anas said: The Messenger of Allah (saw) said:

“Do not lighten from the light of the Mushrikeen (polytheists).”

Likewise, it was reported that the Messenger of Allah (saw) said:

“I am innocent of every Muslim (siding) with a Mushrik”.

Moreover, when the kuffur states conclude treaties, agreements or military alliances with Muslims, they conclude them in order to achieve the interest of the kuffar in Muslim countries and to find influence and control for them in them, and from all of this it becomes clear that agreements, treaties, military alliances, agreements and treaties of protection with kaffir states are forbidden by Shariah and are concluded, and Muslims are not obligated with them, because all of them contradict the rule of Shariah.

As for the description of this agreement, the least that can be described is that it is a crime. Is it reasonable for a country to give access to America in the way this regime did?! Article 3 of the agreement states: “Jordan shall provide for the United States Forces, United States personnel, and United States contractors and others, as mutually agreed, the possibility of unimpeded access to the facilities and areas agreed upon.” Article 7 also stipulates: “The United State forces and the United States personnel will be permitted to enter and exit the Jordanian territories and move freely in it”. Article 8 made matters worse, stating: “Aircraft, vehicles and ships operated by or on behalf of the United States forces may enter, exit and move freely in the Jordanian territories and territorial waters. “… Isn’t this occupation itself?!

And from criminality; to find in a country whose people crowd at the doors of hospitals and do not find beds to shelter them from illness, and it make a pledge to America with this statement: “In the event that US personnel need more medical care than provided by the United States, the Jordanian Armed Forces shall provide basic and emergency medical services free of charge.”

And from criminality; is to find a country whose people suffer greatly from the high cost of water and electricity and provides it to America free of charge. Article 15 states: “The United States forces and United States contractors are permitted to use water and electricity facilities and other public facilities on terms and conditions, including prices or fees, that are no less favourable than those available for the Jordanian Armed Forces or the Jordanian government,” is there any crime after this reality?!

The regime in Jordan thought that with this agreement and granting America the military facilities; it will succeed in silencing America from it, and that it will protect its crooked chair with legs that have rotted. But this thinking will not benefit it, because Allah (swt) says:

“Give tidings to the hypocrites that there is for them a painful punishment * Those who take disbelievers as allies instead of the believers. Do they seek with them honor [through power]? But indeed, honor belongs to Allah entirely” [An-Nisa’: 138-139].

O Our People in Jordan:

Now that you know of the prohibition of the military cooperation agreement between America and this regime, and it became clear to you that this agreement is a crime that surpasses every crime. How can you accept that this regime surrenders – without being held accountable by you – your power centers, which gives you your protection: (Muwafaq Al Salti Air Base in the vicinity of Al-Azraq, the joint training center complex in Al-Humaymah, Marka Air Base, the Royal Jordanian Naval Base in the Port of Aqaba, King Faisal Air Base Al-Jafr, Prince Hassan Air Base, and other things mentioned in the annex to the agreement)?!

Today you are between two options: either silence and acceptance and the destruction and loss that follows, or moving and stopping these mischievous people and to prevent them from pushing the country into the abyss. The time is short and (running) fast, and the cunning of the agents and the villainy of the kuffar do not allow you to wait further. So hasten to bring change and establish the Khilafah (Caliphate) that implements the rules of Islam; Islam requires you to establish a caliph from among you whom you give bay’ah (pledge of allegiance) to, to act on the Book of Allah (swt) and the Sunnah of His Messenger (saw), to rule according to what Allah has revealed, to eliminate the systems and laws of kuffr, and to unite you in the Khilafah (Caliphate) and save you from these disasters that these criminal rulers inflicted upon you, so respond to the command of Allah that gives you life, Allah (swt) says: