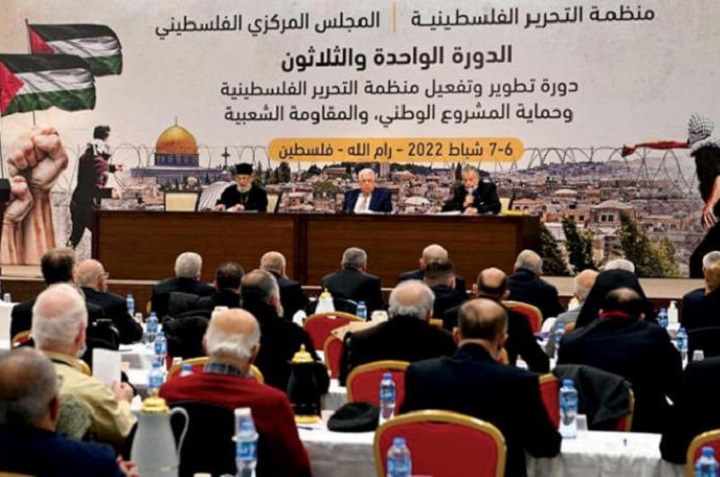 On Wednesday, the Central Council of the Palestine Liberation Organization decided to suspend recognition of the Jewish entity and to terminate the Palestinian Authority’s commitments to all agreements with it, pending its recognition of a Palestinian state on the borders of 4/6/1967, with East Jerusalem as its capital. The Council called for providing international protection for the Palestinian people and for implementing the resolutions of the International Bill. These decisions of the Central Council came in a statement issued at the conclusion of its meetings in the city of Ramallah. The Council assigned the Executive Committee of the Palestine Liberation Organization to work on developing the appropriate mechanisms to implement its decisions, as required by the supreme national interest of the Palestinian people.

As is customary in the decisions of the Central Council of the Liberation Organization, which existed only to surrender Palestine, these decisions came once again to confirm the separation of the Palestinian cause from Islam and the Islamic Ummah and to confirm the dependence of this organization on the West and international colonial decisions.

These Central Council decisions are not new, and they are nothing more than a few words and texts that have no political value and no translation on the ground. They do not affect the reality of the “sacred” security coordination with the Jewish entity. Three years ago in October 2018, the same decisions were taken, but they remained inside the meeting in which they were approved in, and did not go out and have not been implemented since then, and the security coordination has continued despite the lack of recognition of the Palestinian state and the non-stop building of settlements!

Moreover, the assignment of the Central Council of the Executive Committee of the Liberation Organization, headed by PA Chairman Abu Mazen – a friend of Gantz who boasts of killing the martyrs of Nablus – and whose membership includes Hussein Sheikh, the promoter of the cooperation with the Jewish entity and the chief coordinator. This clearly indicates the lack of seriousness of these decisions and that they are just media fanfares to cover up the shared crime of the PA – the legitimate son of the organization in its central and national councils – with the Jewish entity in shedding the blood of the people of Palestine, as happened in the crime of Nablus, which was one of the fruits of dirty security coordination with the Jewish entity.

The lie called ‘peace’, which the organization and its offspring the PA clings to, has no existence on the ground. Peace and the existence of the PA are just a cover for the Jewish entity to implement its criminal policies against Palestine and its people. The role of the authority today is full partnership with the Jewish entity in order to crush the people of Palestine and fight Islam, and silencing every voice in it that appeal to the Islamic Ummah and its armies to liberate the Blessed Land.

The main body responsible for the crime of the security coordination is the Liberation Organization, which produced the Palestinian Authority. These decisions and meetings are a miserable attempt to appear as an opposition to what is happening while it is the first conspirator against the cause of Palestine and its people. It accepted the two-state project and separated Muslims from their cause under the title of being the ‘only legitimate representative’. It is the one that recognized the existence of the Jewish entity as a legitimate state, it is the one that signed Oslo Accords, and it produced the PA that implemented all forms of oppression it knew against Palestine and its people which it brought forth.

Today, it is the one that sheds crocodile tears for the outcome of the Palestine issue, while at the same time is proud and clinging to its treacherous legacy instead of disassociating it. At the same meeting, the organization called on the administration of US President Joe Biden to fulfill its pledges regarding commitment to the two-state solution and the establishment of a Palestinian state on 20% of the land of Palestine! O people of Palestine, do not be deceived by these decisions and meetings, for they are nothing but a deceptive mirage, and be assured that there is no solution to your cause except by uprooting the Jewish entity and uprooting its roots that sprouted from the Blessed Land. This is an honour that will not be attained by the traitors who are in the arms of the occupiers and the colonizers, but will be attained by the sincere Muslims who are in the armies of conquest and liberation under the banner of Tawheed, and we see that this will be achieved soon, Allah willing.