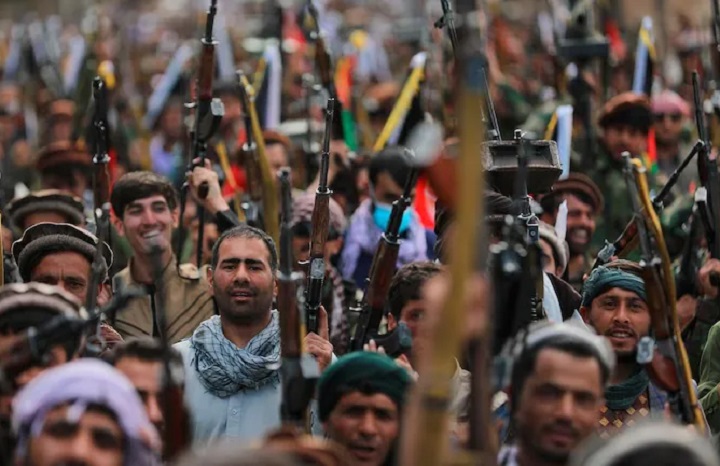 After the announcement of US troops withdrawal from Afghanistan, tens of districts have been captured by the Taliban in the past two months. The Afghan government has been extremely overwhelmed by such an act; therefore, it turned to militarization under the name of “Public Defense” to prevent more districts from falling in the hands of the Taliban by distributing weapons to the people and local commanders in some areas.

Such a plan would lead Afghanistan into a grave chaos as neither side of the war would be able to resolve it later. Because militarization leads Afghanistan through an Intra-Afghan war in which violence, killings and assassinations would be intensified where the main victims of such a heinous scenario would be the Muslim people of Afghanistan.

The Media Office of Hizb ut Tahrir/ Wilayah Afghanistan once again calls upon the Muslim people of Afghanistan, the warring parties, local commanders and influential leaders to focus on the root causes of the current crises instead of fighting each other. The current bloody war is due to the hypocritical American policy on war and peace in Afghanistan, which was consciously conspired to lead to the withdrawal of its forces from the battlefield while causing the Afghan people to get involved in a dirty war. Now, the US, as a mediator and bystander, is directly overseeing this bloody scenario and translating it to be an internal war between the Afghans themselves. While the current repulsive situation is the result of multidimensional policies of the US which, at one point, has been aimed at deceiving the people with false hope for peace; while on the other hand, pushes for the escalation of war on the ground. Such a multi-faceted game of the US has not only confused both sides of the war but has also led Afghanistan into another catastrophe.

In fact, the US has suffered a military defeat in Afghanistan; therefore, to protect its global prestige, it resorted to the peace scenario – which is principally not meant to end the war and sustain peace, but to open another chapter of disaster. With this policy at hand, the US is trying to manipulate the situation in such a way that, after massive bloodshed, it would propose its own agenda to maintain a stronger intelligence and political presence in Afghanistan and to prove to the world that the main source of the crisis is the Afghans themselves, not the US.

The warring parties and the Muslim people of Afghanistan must realize that the only side that undeniably benefits from this filthy war is the US. Therefore, it is time for the Muslims of Afghanistan to take control of their affairs on their own hand and avoid from falling into the vicious traps set for them by the occupation. They must instead try to get together, politically and intellectually, on the basis of Islamic beliefs and Sharia. Otherwise, with the continuation of the current situation, another saddening chapter of catastrophes will open in the history of this land that will drown everyone onward.

“Do not revert to Kufr after me by beheading one another!” (Bukhari)