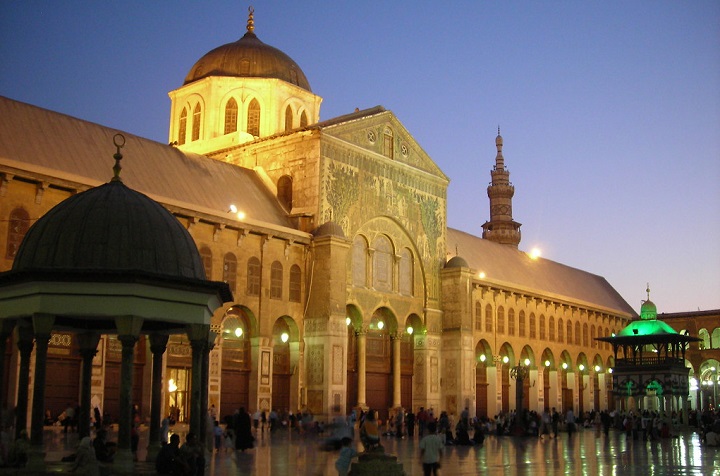 Syrian activists circulated on social media and news channels pictures showing people practicing strange religious rituals in the Umayyad Mosque in Damascus, as part of the violations of the criminal Syrian regime against the people of Ash-Sham and their religious sanctities.

The pictures show a person dressed in orange, practicing a strange meditative ritual similar to yoga, in addition to a woman who is a follower of that person also wearing an orange dress, surrounded by a group of women who appear to be dancing in front of them.

There is no doubt that the sanctities of Muslims in the land of Ash-Sham are violated, and their sanctities are usurped, especially under the rule of the father and son, the tyrants of Ash-Sham. During the past years of the revolution, many mosques were destroyed, including those dating back to the Umayyad era, and many mosques were converted to other purposes. Activists have shared (the video of) the attack on the Abu Bakr As-Siddiq Mosque in the city of Aleppo. Also, more than 1.5 million Muslims were killed, thousands of chaste Muslim women in detention centers and others were raped, not to mention the hundreds of thousands of detainees in prisons, millions of people displaced, destroyed towns and villages, and looted homes and properties.

What is happening in Muslim countries in general, and in the land of Ash-Sham in particular, of criminality and aggression against sacred sanctities, is caused by the rulers of destruction and the absence of a guardian for Muslims and the imam, the shield who is fought from behind him and is protected by him, who mobilizes armies for a woman, to defend the honour of Muslims and preserve their sanctities.

The kaffir West, its henchmen, and its agents did not dare to violate the Muslim sanctities or mock their Noble Messenger or violate their honour, except after they demolished their state, excluded their Deen from the state and society, and imposed puppet rulers over them who practice all kinds of oppression, brutality and criminality; to preserve the systems of kufr and prevent the return of Islam to ruling, and to achieve the interests of their masters and their colonization of Muslim countries.

O Muslims in Ash-Sham, the abode of Islam: Life under these man-made functional systems is a life of humiliation, enslavement and humiliation, and it is undoubtedly a life of hardship that our Lord (swt) has told us about, Allah (swt) says:

“And whoever turns away from My remembrance – indeed, he will have a depressed life, and We will gather him on the Day of Resurrection blind.” [Ta-Ha: 124].

To get change there must be sacrifice and steadfastness if you want a life of honour and dignity under the shadow of Islam for you and your children after you. You launched a blessed revolution against a tyrant of the most powerful tyrants known in history, and you made huge sacrifices; you shook his throne and almost destroyed its pillars. We have no helper after Allah (swt), but to adhere to the constants of our revolution, and work to correct its course, after the conspirators and those trading (with it) tampered with it. And this will only be possible by adopting a clear political project emanating from the belief of the Muslims, and following an aware and honest political leadership that leads Ash-Sham’s revolution with insight to achieve its constants and goals, on top of which is the overthrowing of the criminal regime and the establishment of the rule of Islam on its ruins, so that we may win the glory of this world and the Hereafter, and that your name be written in the highest heavens, and you will be eternally remembered in history. So, seek your salvation and build the edifice of your glory with your own hands, and do not wait for a solution from your enemies or from the deceitful conspirators who are called “friends”, they are the enemy, so beware of them, and trust in Allah Alone, and hold fast to His (swt) strong rope, for victory is only from Allah Al-Aziz (The Mighty) Al-Hakim (The Wise).

“And Allah is predominant over His affair, but most of the people do not know” [Yusuf: 21]