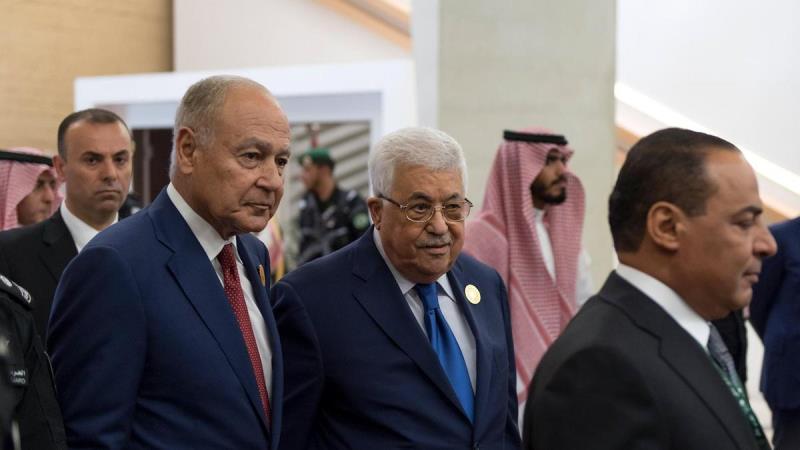 And the President of the Palestinian Authority and the Destructive Rulers in Dhahran Affirm their Keenness to Abandon Palestine and Al Quds (Jerusalem)!

On Sunday 15/4/2018, the Arab Summit in Dhahran, Saudi Arabia, took place. The shameful rulers met and came up with a shameful declaration affirming their treachery and conspiracies against Islam. They affirmed that West Jerusalem is the capital of the Jewish entity and affirmed their commitment to the peace process and international resolutions that instill the Jewish occupation of the blessed land. And to make the Arab states a faithful guardian to the security and stability of the Jewish entity, and affirmed their protection of the borders drawn by the colonialists to divide the Muslims, and they affirmed their loyalty and sincerity to the enemies of Islam and that they will exert all efforts to fight against “terrorism” i.e. Islam.

The rulers are liars, deceivers, traitorous and criminals; they claim that they are concerned about Al Quds (Jerusalem) and Palestine and they condemn through the media Trump’s recognition of Jerusalem as the capital of the Jewish entity, while they make deals with America worth hundreds of billions and open the countries for its bases and aircrafts that kill Muslims.

They claim to be fighting terrorism and the fact is that their war is against Islam and Muslims. Will they fight American terrorism or is America’s killing of hundreds of thousands of Muslims not terrorism?! Will they fight terrorism practiced by the Jewish entity, or aren’t the occupation of the blessed land and the killing of children and the unarmed people considered terrorism?! أَفَنَجْعَلُ الْمُسْلِمِينَ كَالْمُجْرِمِينَ * مَا لَكُمْ كَيْفَ تَحْكُمُونَ “Then will We treat the Muslims like the criminals?  What is [the matter] with you? How do you judge?” [Al-Qalam: 35-36]

America made Iran the enemy of the Gulf countries, so they showed hostility to Iran that they never showed to the Jews, and so did Iran and its henchmen of the militias it supports in Yemen, Syria and Iraq; they took the Muslims as their enemies and violated their sanctities. Thus, Muslims are killed and their counties are destroyed in a dirty game by agent traitor parties, sharing roles to keep Muslims divided and fighting.

And the leaders of the Palestinian Authority (PA) of shame and disgrace cry over Palestine and shed crocodile tears. What the Jews have achieved under the Palestinian Authority is more than twice as many as they have achieved before its existence. A witness to this is the great expansion in the settlements and making its security apparatuses a tool used by the occupation, protecting its security and the security of its settlers. The occupation army raids, arrests, kills and demolishes houses, yet the security apparatuses stay in their burrows. They do not move a finger. If a settler or a soldier is lost, the apparatuses of the Authority are mobilized, and they rush to protect him and ensure his safe exist. The Palestinian people know the extent of “sacred” security coordination between the PA and the Jewish entity, which has resulted in the death of a large number of martyrs and detainees.

The liberation of Palestine is possible only through the power of an army that is sincere to Allah (swt), and that is why we raise our voice by invoking the Islamic Ummah and its armies to carry out their duty to liberate it. The group of criminals and treacherous rulers claim that they will liberate a quarter of Palestine through the international institutions and the great colonial powers that planted the Jewish entity and provided it with cover and protection! The rulers gathered in Dhahran and begged the International Community and the international institutions for support, while the people of Al Quds gathered in the thousands in the Al-Aqsa Mosque commemorating Isra and Mi’raj and the destruction of the Khilafah (Caliphate), invoking the Islamic Ummah and its armies to establish the Khilafah and liberate Al Quds. They cried loudly in takbeers calling for the Islamic Ummah’s support, filling the hearts of the Jews with rage. So, who is the sincere in his call to liberate Al-Aqsa Mosque; those who call on America and the countries of disbelief, or those who believe in the promise of Allah and trust in their Deen and Ummah?!

Hizb ut Tahrir has invited the people of Palestine to take part in mass rallies in Ramallah, Al Khalil (Hebron), Jenin invoking the Islamic Ummah and its armies to liberate Al Quds. These marches fulfilled the legal aspects, but the Authority did not comply with its own law. It mobilized its security apparatus and attacked the advertisement leaflets for the event and ripped it up and arrested the members of the party who were hanging the leaflets, and erected barriers and rallied in front of the Great Mosque of Jenin. It did not show respect to the sanctity of the houses of Allah and fired tear gas and assaulted people and the elderly with batons and detained large numbers of people to prevent this good work. It claimed that the march is illegal. In Al Khalil, despite reassurance from the police that the march will be carried out without harassment and that they will organize the path of the march, they broke their word and mobilized the Dayton forces in helmets and gears, and in the end of the march they began to throw the tear gas at the old and young, the elders and dignitaries of the city as if they were furious with the people of Khalil and its dignitaries’ response to the call for the march and to embrace the Khilafah and its callers. But despite the oppression of the PA, thousands of people of Palestine in Al Khalil and Jenin participated and chanted and shouted takbeers calling on the Islamic Ummah and its armies to establish the Khilafah and liberate Al Quds... Is not preventing the people of Palestine from this good and suppressing them a service to the occupation and instilling it?

These practices are not strange for the Authority; its crimes against the people of Palestine cannot be counted; it has changed the school curriculum in response to the enemies of Islam, and is still working to remove our children from their Ummah and their creed, and is corrupting their morals through the so-called extra-curricular activities, like dancing, music, singing, acting and mixed marathons. In addition, it imposed many taxes and helped banks to hold on to people’s property. Its business tycoons seized the markets by monopolizing some goods and services. The people suffer under the occupation and its crimes and suffer under the PA and its crimes.

When the Authority says that its prime minister is the one who decided to prevent the marches, we know that those who decided are his masters. The chief negotiator Saeb Erekat described the truth of the Palestinian Authority, he said:

“The real president of the Palestinian people is the army minister, Avigdor Lieberman, and the Palestinian prime minister is the coordinator of the affairs of the “Israeli” government in the occupied territories, General Polly Mordechai”.

These crimes confirm to the people of Palestine and to the Muslims in all parts of the world that the head of scourge and treason is the criminal rulers who exert every effort in fighting Islam and fighting every sincere call to the Ummah to restore its pride and revival. These agents make fun of the Ummah’s sons, the armies and security apparatuses to strike their Ummah in service of the enemies of Islam and to protect their worn-out thrones.

Let the Authority know that its crimes will not pass without reckoning in the world before the Hereafter, and that its loyalties to the enemies of Islam will not be of benefit to it, and will not save them from the wrath of the Ummah, but will throw them in a deep place of shame and humiliation. Hizb ut Tahrir and the righteous Muslims with it will continue to uphold Islam and establish it in the land; those with more power did not dissuade them from this path. It is better for them to stop their arrogance and crimes, for Allah’s victory for the believers is closer than they think.

Our trust in Allah is great, and we are sure that the Islamic Ummah will rise from its stature and will establish the second Khilafah (Caliphate) on the method of Prophethood. The Messenger of Allah ﷺ gave us the glad-tidings of opening Iraq, Ash-Sham and Constantinople, and this was ascertained by the hands of the believers. He ﷺ gave us the glad-tiding of Khilafah Rashida on the method of Prophethood in Al Quds. And he ﷺ gave us the glad-tiding of the conquest of Rome and the spread of Islam in the land by the support of a powerful or the humiliation of the weak; a victory for Islam and its people and a defeat for the Kufr and its people, and this is soon, Allah willing, and we are certain that the armies used by the rulers for the interests of the Kuffar and the enemies of Islam will turn against these agent criminals, and Allah will open the hearts of soldiers to support His Deen, and we will see their hordes raise the banner of “There is no god but Allah, Muhammad is the Messenger of Allah” and they will march roaring to Al Quds, the house of Islam, to liberate it from the occupation.

So Muslims, trust in Allah’s promise and victory.