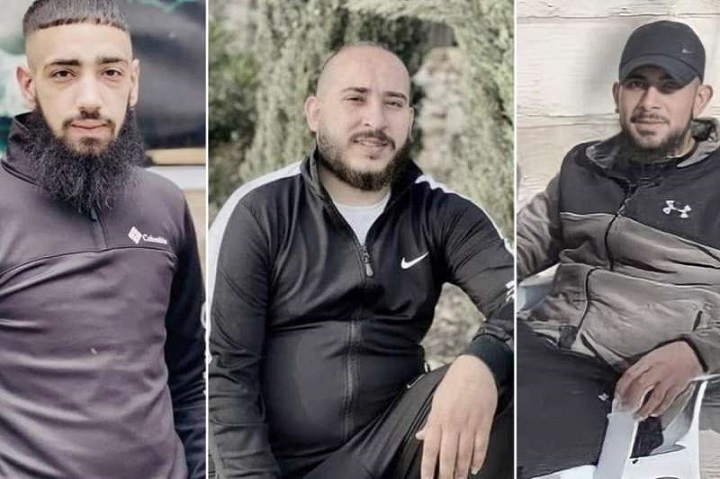 In a heinous crime no less heinous than the face of the monstrous Jewish entity, a special force of the occupation army assassinated three young men in the city of Nablus, where they were sprayed with bullets of hatred until they all passed away to Allah’s Mercy, Allah willing. We ask Allah Almighty to make them dwell in heaven and to place them in the homes of the Martyrs.

This crime of occupation, despite its ugliness, is not unique in its type, nor is it separate from the daily criminal practices of the occupation against the people of Palestine. Killing, demolishing homes, arrests and captivity, daily abuse and economic suffocation are the stark reality that is confirmed daily for the meaning of occupation. Moreover, this crime of occupation comes to remove all pretense of the illusory sovereignty of the authority, so that the Jewish entity did not have a drop of face in return for its services, and to expose the reality of this authority as it is before the people of Palestine.

While the Jewish entity insists on killing and criminalizing it without deterrence, the Palestinian Authority (PA) insists on continuing to take it and belittling itself in action and word. As for the action, the enemy’s killing squad entered with complete peace of mind and did it and then exited as well, quietly and smoothly, without any action or reaction from the armed “security” authorities! And without the knowledge, news or warning of the “devices” that monitor people’s breath, the words of truth and the expressions of the pulpits, to confirm that their devices are out of the equation when it comes to the security of the people of Palestine and at the heart of the “sacred coordination” equation in order to preserve the security of the entity. As for their words, the positions issued by the leaders of the PA, such as the demand of its Council of Ministers for an “international investigation into the crime,” and the statement of its foreign minister, who “condemned the assassination” and demanded “the ICC shoulder its responsibilities,” as well as the statement of one of them, “The response to the assassination must be through popular resistance, for we are not sheep.” These statements of sheep confirm in certainty that these routine statements have become part of the scene in every crime of the occupation, and an implicit message to it that our resistance is “popular” and that the blood of the martyrs “will not spoil the friendly cause,” and the people of Palestine are not surprised by this, they are accustomed to that, that power does not turn back an enemy, does not bring security, or controls wickedness, instead of protecting anyone or liberating a land, and that coordinating with it kills them, and that it only increases them in hardship.

The crime of the Jewish entity today, as it was its crimes of yesterday, is a sin and a crime as well on the necks of the rulers in the governments of shame and the regimes of indifference. They are the ones who allowed this cowardly entity to dare and do what it does by demeaning them, conspiring and normalizing with them, and that this blood is also a sin on the necks of the capable of the sons of the Islamic Ummah from the people of strength and invincibility and the staff of the armies, and Allah will ask them about their failure on the Day of Resurrection, just as there will be all the blood that will be shed on their necks in the future unless they move with them and with them the Ummah of Islam to uproot this entity from its roots and put an end to its crimes once and for all, and they are capable of that and Allah is with them and supports them if they decided to resolve the matter and made the sincere intention towards Allah (swt)

“And what is it with you? You do not fight in the cause of Allah and for oppressed men, women, and children…”
[TMQ An-Nisa: 75].