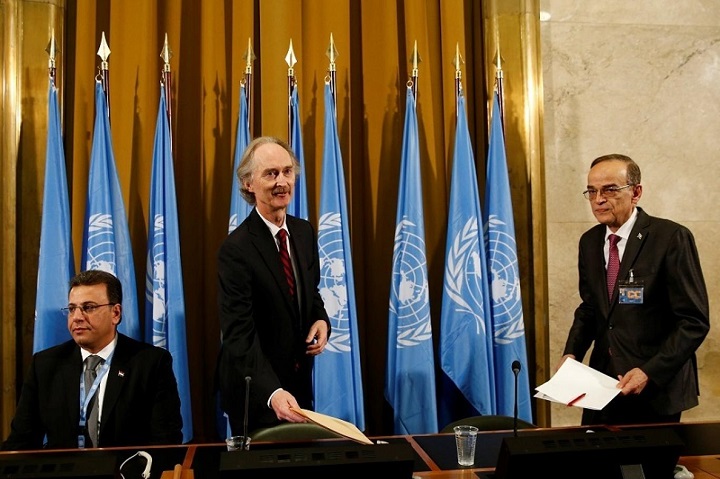 O Muslims in the blessed land of Ash-Sham: There is no doubt that the work of this committee is dependent on the support of the international community and is linked to it. Therefore, all articles will be subject to the approval of the Kafir West first and foremost. Anything else such as the claim of consensus or referendum…etc. is nothing but mockery and ashes in the eyes.

O Muslims in Ash-Sham, the abode of Islam: Allah Almighty has enjoined upon Muslims to arbitrate to His True law (Shara’), Glorified He who said:

“And judge, [O Muhammad], between them by what Allah has revealed and do not follow their inclinations and beware of them, lest they tempt you away from some of what Allah has revealed to you. And if they turn away – then know that Allah only intends to afflict them with some of their [own] sins. And indeed, many among the people are defiantly disobedient” [Al-Ma’ida: 49].

He made happiness and a comfortable life related to the extent of Muslims’ commitment to the law of their Lord and His guidance; He, May His Glory be Glorified, said:

“And if there should come to you guidance from Me, then whoever follows My guidance will neither go astray [in the world] nor suffer [in the Hereafter].” [Ta-Ha: 123].

So, as you are waging a revolution against the tyrant of Ash-Sham; you should crown your great sacrifices with the establishment of the obligation of your Lord, rather the crown of His obligations; and that is by establishing the Khilafah Rashidah (rightly guided Caliphate) on the method of the Prophethood, for it is, by Allah, your happiness in this world and the Hereafter, and it is undoubtedly the honor of the Muslims, the empowerment of the religion and the satisfaction and mercy of the Lord of the worlds. This is practically embodied by adopting a clear political project emanating from the Muslim Aqeedah, and adopting a conscious and sincere political leadership that leads the people of Ash-Sham to safety. Here we must remind Muslims in general and the people of Ash-Sham in particular; that we in Hizb ut Tahrir present to all Muslims an Islamic constitution deduced in all its articles from the Qur’an and Sunnah, and what they guide us from the consensus of the Companions and the Shari’ analogy, that shows the form of the state that our Sharia has been described to us, and determined for us its institutions and the mandatory powers of these institutions, so that what we seek does not remain just a slogan, or a general demand rather, a specific goal that we seek with insight in a straight legitimate way.

We work day and night with our Ummah, our cradle, and those who support us; until this constitution is put into practice in the Khilafah Rashidah (rightly guided Caliphate) state on the method of the Prophethood that the Messenger (saw) gave us its glad tiding when he said:

“Then there will be Khilafah according to the method of Prophethood. Then he (saw) fell silent”.