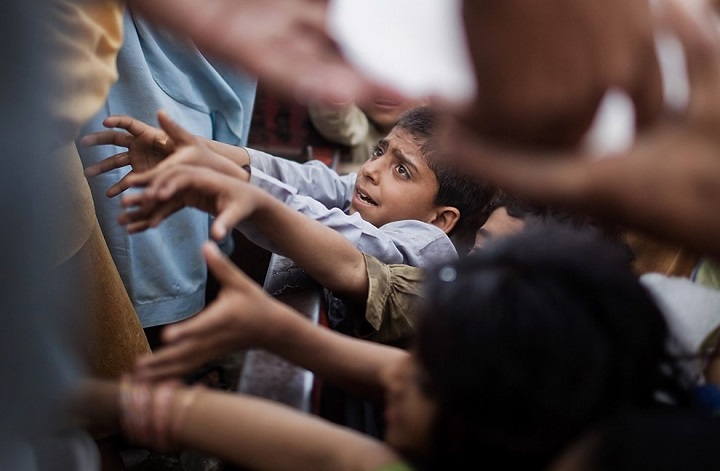 Like other currencies, the Dollar, the Pound and the Franc, originally, the Rupee was backed by real tangible wealth in the form of a precious metal. In the case of the Dollar, it was gold, in the case of the Rupee it was silver. This system stabilized the value of the monetary unit both internally within the country and externally in international trade. The evidence for this was that the standard prices of gold in 1910 were almost the same level they were in 1890. Today, there is sufficient gold and silver in the world to support the actual economy, transactions such as buying and selling food, clothing, shelter, luxuries, manufacturing machinery and technology and so on. However, due to capitalist practices, the demand for the creation of money outstripped the supply of gold and silver.

The states abandoned the precious metal standard, so that currency became backed only by the authority over the state, allowing more and more notes to be printed, without being backed fully by gold and silver, such that each new note has less value than previously. However, money is used to buy commodities and services, so the money became worthless, if not almost worthless. More of it was needed to buy, so the price of all commodities and services began to rise. Continuous rises in price is now so much part of the system that inflation is a widespread measure of how fast they are rising. Thus, the rupee that was once worth over eleven grams of silver before the British occupation, after over two hundred years of the capitalist system is now worth around one nine hundredths (1/900th) of a gram of silver.

Upon the IMF condition of devaluation, Pakistan’s rulers weaken our currency to make our exports cheaper for Western states to buy, whilst imports become more expensive, as well as everything in Pakistan, including its interest-based debt. Thus, in January 2001, 59 Rupees bought one dollar but in April 2022, the Rupee has been weakened to the extent that 185 Rupees buys a single US dollar.

With each passing year, the Rupee is worth less and can buy less with huge increases in prices, such that buying meat is beyond the reach of most, fruit is a luxury and vegetables are becoming a great burden. Today, the Rupee is worth less than a Paisa was a few decades ago. Despite the false reassuring claims of the government to the contrary, the Rupee is collapsing constantly, which is leading to huge increases in prices. Yet, the government continues to print more and more money unheeding of the dire consequences, busily digging a grave for the lifeblood of the economy, its currency.

Factors Leading to the Demand for the Creation of Money, Beyond the Gold and Silver Supply

According to the SBP country’s debt and liabilities have soared to Rs. 15 trillion in April 2022. Persistent borrowing by the government to bridge budget deficit has resulted in inflation. Pakistan’s debt obligations have crossed all sustainable levels. A government domestically borrows on interest either from its public, bank and non-bank, or from its central bank. In recent years, the government has resorted to heavy borrowing from the central bank, which is called “monetizing” the deficit. As this method always leads to the growth of monetary base and of money supply and ultimately inflation, it is often referred to as just “printing money.” In addition, sustained inflation may stem only from a persistent rather than a temporary budget deficit that is eventually financed by printing money, rather than by borrowing from public. In addition, when banks acquire the government debt, government borrowing puts additional pressure on banks’ reserves and banks may demand more liquidity from the central bank. When such an extra demand from banks is accommodated and the central bank supplies banks with additional reserves, then in fact monetary base increases, thereby causing a rise in money supply through deposit multiplication, further fueling inflation.

Thus, in the realm of capitalist banking, a small fraction of society benefits greatly through investing in debt, whilst most of the people continue to suffer after-shocks from loans, from spending cuts, loss of the value of the rupee, price hikes, business closure and unemployment, all of which lead to a continuous spiral of economic destruction.

Depreciation of the Rupee Leads to Inflation

The capitalist balance of trade policy through devaluation of the Rupee also leads to inflation. Being a net importer country with a weak manufacturing base, Pakistan’s capitalist government oversees the devaluation of the Rupee, in accordance to IMF orders. This was claimed to be primarily done to address Pakistan’s balance of trade. This is where the state actively discourages the import of goods and encourages the export of domestic goods. However, by devaluing the Rupee, the Pakistani government increased the costs of manufacturing inputs, which caused havoc in the agricultural, textile and other sectors that were already reeling from the policy of high interest rates. Hence, the high cost of borrowing, together with the increase in manufacturing costs, rendered many industries and companies unable to compete internationally. Incapable to find buyers for their expensive products, key exports declined and Pakistan’s balance of payments deteriorated. This was further compounded by the continued import of basic food stuffs.

Despite being the fourth largest agricultural economy in the world, Pakistan is a net importer of foodstuffs. This means Pakistan must pay more for its food imports, after devaluation, thus causing domestic food inflation to greatly rise. To conceal the failure of its devaluation policies, the Pakistani government has relied more and more on expatriate remittance and the export of domestic staple foods to boost Pakistan’s balance of payments. The latter is particularly cruel for the Pakistani population, as in a desperate bid to earn foreign exchange and improve the balance of payments, the Pakistani government exports much needed staple foods, such as rice and wheat, which leads to shortages at home. Moreover, the hard earned foreign exchange is not re-invested back into the domestic economy.

Thus, the Pakistani government borrows from international institutions to redress a shortfall in balance of payments compounding its problems. These new loans come upon interest, such that Pakistan, like most “developing” countries have paid back the principles several times over and are actually never allowed to “develop,” because these loans come with conditions to strangle the economy, ranging from interest-rates, devaluation of currency, as well as a whole host of fetters on agricultural and industrial growth.

Restoration of the Gold and Silver standard

Return to the gold and silver standard for Muslims is eminently practical. The lands of the Muslims in which the Khilafah state is likely to arise contains a lot of gold and silver resources, such as the Saindaq and Reko Diq fields in Pakistan. The Ummah possesses great resources that are direly needed by other countries, such as oil, gas, coal, minerals and agricultural commodities, which can be used to exchange for more gold and silver. The Muslim Lands are self-sufficient in basic commodities, so the real economy is stable and resistant to manipulations and speculation, once the parasite economy is abolished.

Today the Khilafah (Caliphate) will employ exchange of commodities, such as copper, and foreign exchange for gold and silver and will be mindful of net outgoing of gold and silver during international trade, though the Muslim World is self-sufficient in most matters.Re-establishing gold and silver in international trade will end the unfair disadvantage that America has by imposing the dollar on international trade. As Hizb ut Tahrir has adopted in its Introduction to the Constitution, Article 166, “The State issues its own independent currency, and it is not permitted for it to be linked to any foreign currency.” In Article 167 it has adopted, “The currency of the State is to be restricted to gold and silver, whether minted or not. No other form of currency for the State is permitted. The State can issue something as a substitute for gold or silver provided that the Bayt al-Mal (State Treasury) has the equivalent amount of gold and silver to cover the issued coinage.” In Article 168, it has adopted, “It is permissible to have exchange between the State currency and the currency of other states like the exchange between the State’s own coinages.”

The Bayt al-Mal in the Khilafah

The Bayt al-Mal in the Khilafah will be a financial institution to support the growth of the real economy, including agricultural and industrial development. Its sole focus will be to develop a vibrant and powerful economy, by using loans to stimulate the local agricultural and industrial sectors. As Hizb ut Tahrir has adopted in its Introduction to the Constitution, Article 169, “It is completely prohibited to open banks, and the only one permitted will be the State bank, and there are no transactions upon interest. This will be dealt with by a particular department of the Bayt al-Mal.”

Rather than destroying the economy and then going cap in hand for more loans, the Khilafah having established Pakistan on a firm footing, will raise a global cry for the end of the injustice of Western colonialist interest based-loaning. It is this unjust system which prevents countries from standing on their own feet, with suffocating conditions, even though they have bled the principle loan several times over from their economies, in the form of interest. As Hizb ut Tahrir has adopted in its Introduction to the Constitution, Article 165, “It is confirmed by the senses and by information whose authenticity is trusted that the use of foreign funds for development in the country is the method to extend the influence of the disbelievers over them, and extending their influence in the land is haram.”