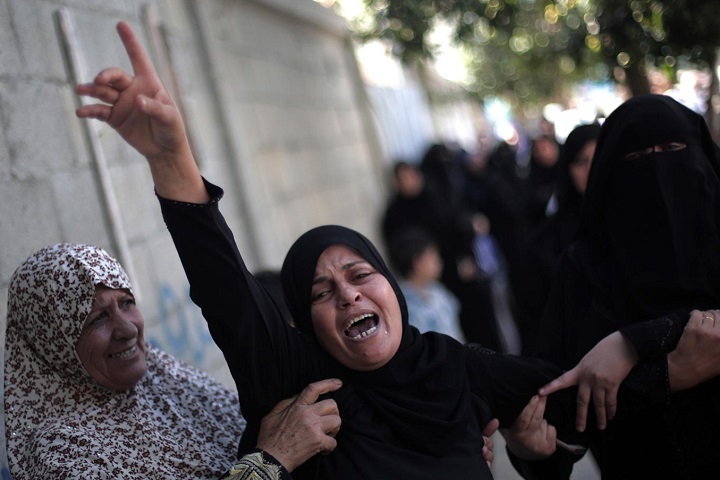 Since the beginning of 2022, more than 45 Palestinian children have been martyred, and Jewish aggression has escalated in the West Bank and Jerusalem, during the past few weeks, which has led to the death of more children, the last of whom was the child Mahmoud Al-Samoudi, 12 years old, who died of wounds he had sustained. It was carried out in a raid on Jenin, and before that the horrific incident took place in which the 7-year-old child, Rayan Suleiman, was martyred after suffering a heart attack from fright while fleeing from the Occupation soldiers.

There are also many women and children suffering as a result of the siege imposed by the occupation forces on thousands of families in Shuffat camp, Anata town, Al-Aroub camp and Nablus, as well as from the settlers’ attacks on homes and properties, including smashing windows, and burning fields and vehicles.

All of this is happening while everyone is watching. The advocates of human rights, children’s rights, and international law are silent, except for attacking what is in the implementation of any of the rulings of Islam relating to women or children. They focus on the Freedom and Family Protection Law, and sometimes with the Child Protection Law, which is limited to protecting the child from their father and mother, and not from the brutal aggression of the Jewish entity.

As for the Palestinian Authority, it is still begging the international community to protect these children, and is still groveling to the perpetrator for sympathy for the victim. The Permanent Representative of the Palestinian Authority to the United Nations, Riyad Mansour, sent three identical letters to the Secretary-General of the United Nations and the President of the Security Council this month. (Gabon) The President of the United Nations General Assembly, regarding the daily killing, injury, arrest, abuse and trauma of Palestinians, especially young people and children, at the hands of the occupying forces, called on the international community, including the Security Council, to act immediately in line with international law and United Nations resolutions reiterating the same broken record of the need for international intervention to protect the Palestinian people, in particular the children, whose lives and future are in grave danger due to this illegal colonial occupation and the apartheid regime. He also called on them to take immediate steps to hold the Jewish state, its army and settlers accountable for all illegal policies and practices in the Occupied Palestinian Territory, including East Jerusalem!

The children of the Blessed Land of Palestine seek your help every day and every hour. The martyr child Rayan appeals to you with his little heart, which stopped for fear from the most humiliated of Allah’s creation, that you take revenge for him against them. This is as well as hundreds, if not thousands, of children and women who died as martyrs, or were injured, disabled, made homeless, or lost their fathers and breadwinners. Is there an answer or a helper?! Allah says:

“But if they seek your help ˹against persecution˺ in faith, it is your obligation to help them,” [TMQ Al-Anfal:72].

So what are you doing?!