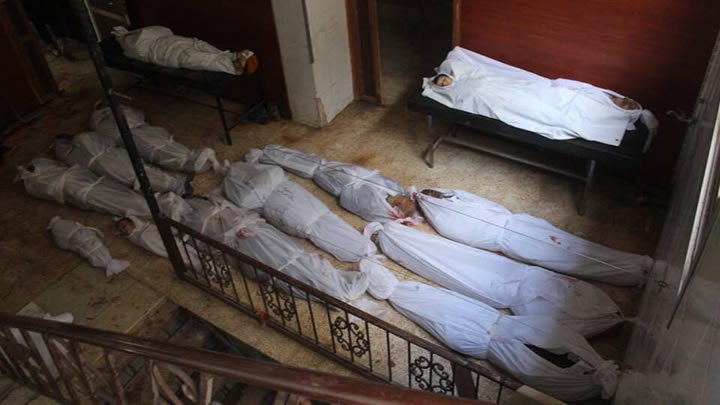 On 22nd of February, the UK-based Syrian Observatory for Human Rights stated that over 400 people had been killed, including 150 children in the previous 5 days ferocious bombardment of Eastern Ghouta by the savage Syrian and Russian forces, who are indiscriminately targeting civilians in homes, shops, schools, hospitals and markets, leaving children buried in the rubble of buildings. Children have been forced to take refuge in caves, dugouts or the basement of their homes as they ‘wait their turn to die’. Doctors have resorted to caring for premature and newborn babies in incubators in cellars where they face dying from the severe cold. The UN Secretary General described the situation as ‘Hell on Earth”. In addition, food, fuel and medicines are in severe shortage due to almost 5 years of the brutal siege by the Syrian government, resulting in mass starvation that has impacted children the most. According to the UN, around 12% of children under 5 are said to be acutely malnourished. The situation is so dire that the dying wish of mothers is that Allah takes the soul of their children to end their suffering, or that their children atleast have the comfort of a full stomach before death befalls them which they see as inevitable due to the bombardment.

We see the bombs raining down on the heads of the starving children of Eastern Ghouta as they face annihilation. We see row after row of slain children wrapped in their bloodied kaffan (death shrouds). We see the tears of the mothers of Ghouta crying out for a morsel of food to feed their young dying from hunger. And we see the utter decimation of this blessed land, and our brothers and sisters being slaughtered into submission, bracing themselves for the ground invasion by Assad’s butchers and a massacre, perhaps worse than that which unfolded in Aleppo. And yet despite all these horrors, the international community, the UN, the regimes of the Muslim world watch on, ignoring the bloodbath, and giving license to Assad and his criminal allies – these murderers of children – to continue the slaughter with impunity. They have taken a match to all their conventions on the protection of human life, human rights, and the rights of the child! Clearly, even this ‘living hell’ is not enough to shake their conscience! For them, the rivers of blood, formed from the children of Ghouta is a price worth paying for their bloodstained political interests in this region! Indeed, it seems there is no limit to the barbarity they are willing to witness to secure their selfish aims.

Surely no further proof is needed to show that we cannot place even the slightest hope in the self-serving conscienceless Western governments, the UN, or the regimes of the Muslim world to protect the Ummah in Syria when they have abandoned the children of Ghouta to their death, and when all their so-called peace-initiatives, interventions and proposed solutions have only bought the butcher Assad time to maim, rape and kill the Muslims. What we witness on our screens of the horrors in Eastern Ghouta, categorized as a “de-escalation zone’ in last year’s Astana Peace Process, is the true face of a so-called ‘peace-initiative’ in the eyes of Russia, Turkey, Iran and the international community!

In light of the heart-breaking atrocities we see in Ghouta, the Women’s Section in the Central Media Office of Hizb ut Tahrir have launched an online campaign under the title, “Who will Defend the Children of Ghouta?”. It will urge the Ummah, and especially the people of power in the Muslim armies to establish with urgency the Khilafah based upon the method of the Prophethood, because it is this Islamic leadership alone which truly cares for the sanctity of human life and which will be the shield of the believers, which will put an end to this living hell as well as the slaughter and oppression of Muslims across the world.