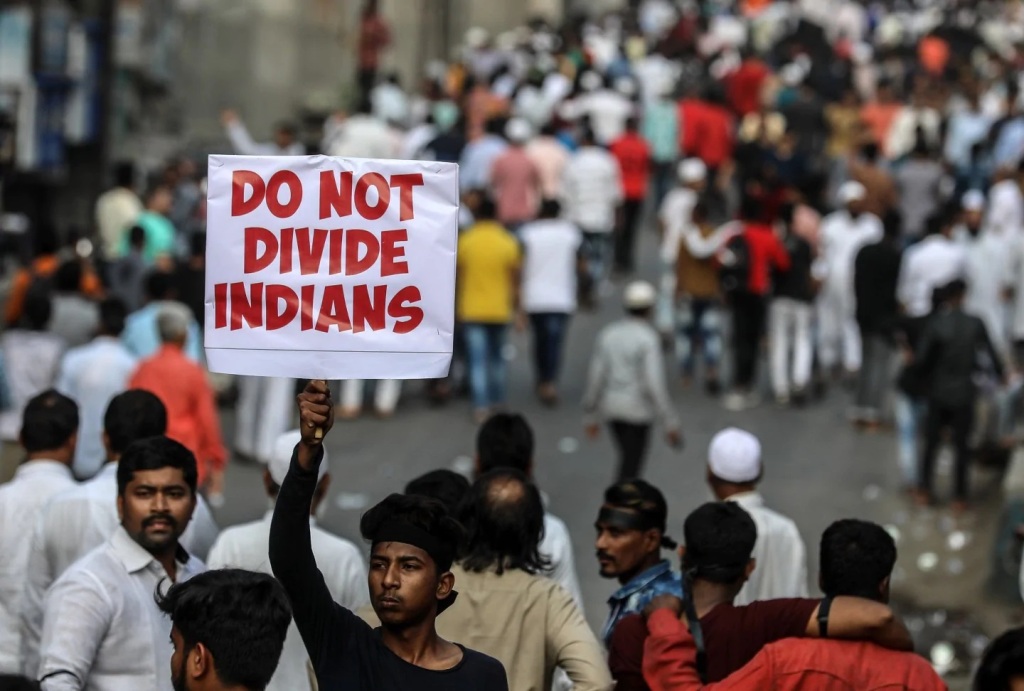 The BBC reported that the Indian cabinet has approved funds for a census and a population survey to be held next year despite weeks of protests over a citizenship law that critics say is anti-Muslim.

Authorities say the updated National Population Register (NPR) will be a comprehensive list of all residents. However, critics say it will be a list from which “doubtful citizens” will be asked to prove they are Indian. More than 20 people have died in protests over the citizenship law.

Authorities say the aim of the NPR is to create a comprehensive identity database of every “usual resident” of the country.

Critics say the NPR is the first step towards the creation of a controversial National Register of Citizens (NRC) that is being championed by the governing Bharatiya Janata Party, but the government has denied this. The NRC has already been implemented in the north-eastern state of Assam.

On Tuesday, thousands held another protest march in the capital, Delhi, even though police imposed a law preventing people from gathering.

Over the past two weeks, hundreds of thousands have swarmed the streets in the southern cities of Bangalore and Chennai (formerly Madras). At the weekend, nearly 300,000 people held a protest march in the northern city of Jaipur.

The Western colonial nations have supported India despite its annexation of Kashmir, despite its internment of Muslims in Assam, and despite its historical and regular oppression and massacre of Muslims at the hands of BJP politicians, such as Modi.

Trump in America was elected while promising to ban Muslims from entering the USA. China is imprisoning millions of Uighur Muslims in East Turkmenistan, simply for being Muslims. All the while, traitorous Muslim leaders, like Bajwa-Imran regime, Erdogan and the Saudi monarchy, encourage such oppression, turning a blind eye to it, or at best offer empty words of condemnation and shed crocodile tears, but fooling no one that they would ever act to defend the Muslims at home, let alone abroad.

Hatred of Muslims runs through the veins of the Modi regime and they are not even pretending to hide it anymore.

As for the issue of citizenship of the Muslims in India, we don’t raise our voice at the fact of not getting Indian citizenship, rather at the dual standards with which the Ummah is treated.

Who would want to be a citizen of a state which is so fragile and fractured that the Hindus of India themselves are set upon by the caste based Hindutva ideology.

Such Double standards are now expected from the followers of the secular capitalist ideology. It is the very hallmark of failed ideologies. Capitalism and democracy only create failure and failed states wherever they go.

Islam has no such double standard with regard to the citizens of the Islamic state.

The Muslim Ummah will truly be citizens under the Khilafah state, a state that will reflect its beliefs, aspirations and ideology. The Khilafah, established on the way of Prophethood, will not only protect the Ummah and all of its citizens, but will propel a strong campaign to challenge and offer an alternative to the unjust capitalist system in the world.

The democratic system all over the world is designed against minorities, particularly Muslims in the current climate of the popular rise of Islam.

But, only Islam managed to secure all the citizens, whatever their race or religion js, to live in peace with justice. This was not as a favour from Muslims but rather the Law of Allah, the Creator who dictates such policy. It is not a policy subject to the whims of parties or states or rulers which changes according to the benefits of one group or another.

Muslims today are persecuted everywhere at the hands of the democrats and capitalists for we hold onto the concept of one Ummah, which does not recognise the artificial nationalist divisions that the colonists have used to divide us with.

But the current crop of agent rulers over Muslim lands have abandoned the Ummah in hope of some favour from a Western colonial master.

The Ummah doesn’t have to be pronounced stateless at the hands of India, for it has been stateless since the destruction of the Khilafah (Caliphate) almost one hundred years ago.

The Messenger of Allah ﷺ is reported to have said: «إِنَّمَا الإِمَامُ جُنَّةٌ يُقَاتَلُ مِنْ وَرَائِهِ وَيُتَّقَى بِهِ» “Verily the Imam is but a shield from behind which the people fight and by which they protect themselves.”

It is only the Khaleefah of the Muslim Ummah who rules according to the Quran and Sunnah that can restore citizenship and dignity to all Muslims. Only he can defend them from the false imprisonment, genocide and oppression that we witness today in India and elsewhere.

Only he can overturn the US plans in Muslim lands, smashing “Akhand Bharat” by unifying Afghanistan, the Persian Gulf and Central Asia with Pakistan through the Khilafah. Then the Indian state will not dare to either continue its occupation of Kashmir or persecute Muslims living in India.