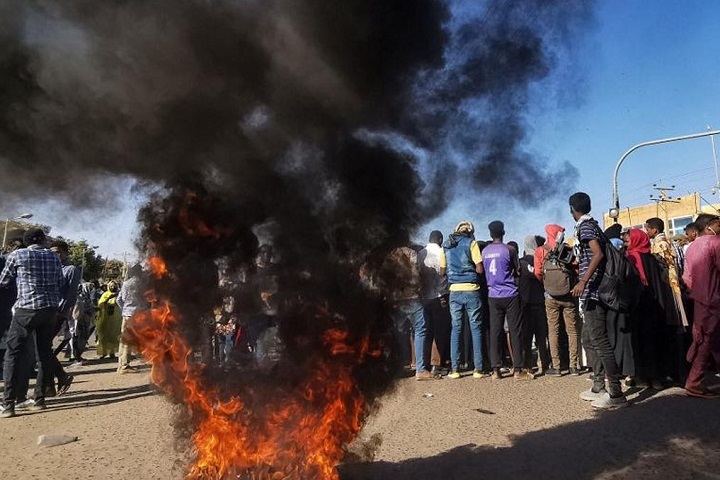 Once again, bloody events and fierce fighting broke out in the Krink region, which is located 80 kilometers from the capital of West Darfur State (El Geneina), in tribal fighting that claimed the lives of, according to our sources, more than two hundred people, hundreds of wounded and displaced so far, in the absence of any series movement by the transitional government to stop the bloodshed, create security, and hold accountable the perpetrators, instigators, and perpetrators of the forbidden blood in the month of obedience, the blessed month of Ramadan.

We in Hizb ut Tahrir / Wilayah of Sudan affirm the sanctity of the Muslim blood, and state the following facts:

First: The fighting in the Krink region was not the first of its kind, and it does not seem that it will be the last, in light of the state’s failure to carry out its responsibilities to preserve blood, create stability and hold those responsible for this fighting to account.

Second: The massive spread of weapons, especially heavy weapons in this region, and in the hands of armed movements and militias that are not affiliated with the state, at a time when the government is failing to carry out its duty to maintain security. All of this is a harbinger of unimaginable disasters, especially with the state of non-state which the military led the people of the country to, according to the admission of Al-Burhan’s advisor Abu Haja, when he referred to “the state of no state in which Sudan is currently living, and it is not in the interest of its continuation, calling for filling the void in the least possible time.” (Sputnik)

Third: Fighting between Muslims is forbidden by Islamic law. The Prophet (saw) says:

“When two Muslims face each other with their swords, the killer and the slain will go to Hellfire.” He asked: I said: O Messenger of Allah, this is the killer (so naturally he should go to Hell), but what is the matter with the slain? He replied: “He intended to kill his companion.” [Narrated by Muslim]

Fourth: The fighting under the tribe bond is prohibited in Islam. The Prophet (saw) said:

Accordingly, we say to the leaders and wise men of these tribes, if they exist, is there not a rational man among you, how do you allow a Muslim to kill his Muslim brother, whatever the pretexts are?

Fifth: The state of the wide security vacuum that extends throughout the length and breadth of the country is a situation created by the colonial kuffar and implemented by their tools: the rulers, militia leaders and the military, through which the colonial kuffar wants to take revenge from the Muslim masses who aspire to change their lives, and to make their country becomes an arena for international conflict.

In conclusion: the facts and events at all levels speak of the inevitability of change on the basis of Islam, for its state, the Khilafah Rashidah (rightly guided Caliphate) on the method of the Prophethood, is the state of care that provides security and a decent life for the subjects,

“The Imam (ruler) of the people is a guardian and is responsible for his subjects.”

O Muslims, we invite you to the good of this world and the Hereafter.