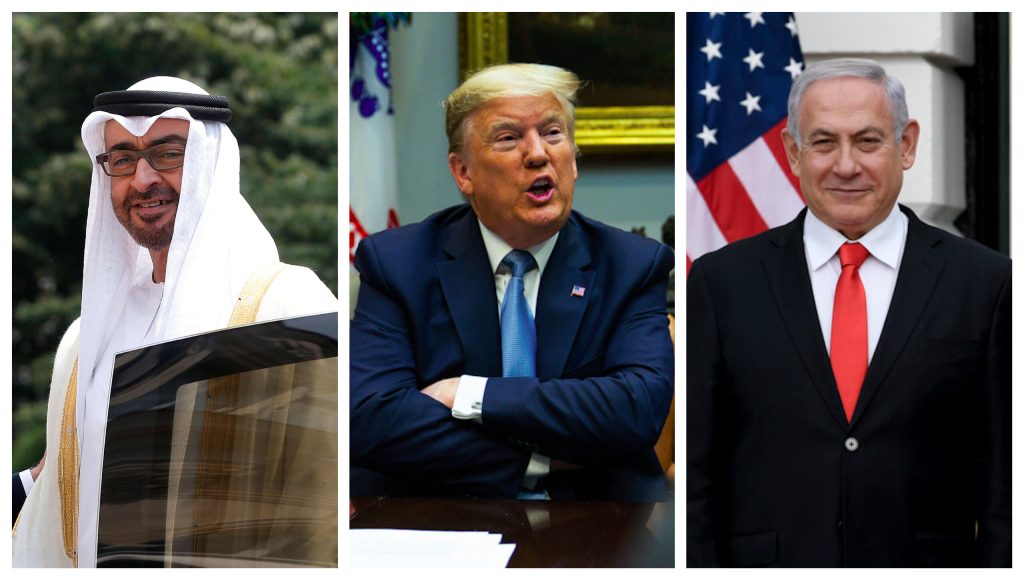 The Normalization of the Emirates is a Black Page Added to the Pages of Traitorous Rulers!!

The United Arab Emirates and the Jewish entity have agreed to establish full diplomatic relations between them, according to a joint statement issued by the Prime Minister of the Jewish entity Benjamin Netanyahu, Abu Dhabi Crown Prince Mohammed bin Zayed Al Nahyan and US President Donald Trump. Bin Zayed said that in contact with Trump and Netanyahu, a roadmap for joint cooperation was agreed upon, in order to establish the agreed bilateral relations, and under the agreement, the two countries will exchange ambassadors and cooperate in various fields, including security, education and health. The Prime Minister of the Jewish entity described the agreement as historic, and said that the UAE will invest large amounts in the Jewish entity, and stressed that the agreement does not cancel the annexation plan, and that he is committed to implementing it in coordination with the American administration only, and that his entity’s policy towards the West Bank will not change.

This new treacherous agreement comes to embody the state of the rulers who have dominated the necks of the Islamic Ummah, for the rulers of the Emirates, like other Muslims rulers, are just cheap tools in the hands of the enemies of the Islamic Ummah, who implement their orders without hesitation or shame. Through a phone call, the rulers of the Emirates officially enter the club of the public normalizers with the Jewish entity, shamelessly join the clique of the recognizers of the existence of the Jewish entity on the bulk of the Blessed Land, and normalize relations with it with all flagrancy and impertinence, as if the Jewish entity does not occupy the first of the two qiblahs, the third after the Two Holy Mosques, and the Masra (ascension) of the Prophet ﷺ!

The wretched rulers of the Emirates were not able to save their face for hours, as their new ally, the Prime Minister of the Jewish entity, declared that he was committed to the issue of annexation and that he would not abandon it and that it is still on the agenda of his government. And with this announcement the Jewish entity quickly drops the flimsy pretext of the Emirates’ rulers, which was represented by the saying of normalization in exchange for suspension of annexation and the extension of sovereignty over the West Bank! This is the fate of every traitor to his religion. Shame in this world and the torment of the Hereafter is more severe and more humiliating.

The rulers of Muslims are equal in betrayal; those who publicly normalize and establish relations, and those who call for a two-state solution, international legitimacy and international decisions as a basis for resolving the issue of the Blessed Land. As the two-state solution advocated by the rulers and the Palestinian Authority, or the treacherous Arab Initiative or the international decisions they all lead to the same result of betrayal, squandering and handing over the bulk of the Blessed Land in exchange for a meagre state whose job is to protect the existence of the Jewish entity and harass the people of Palestine and restrict them for their voluntary displacement or cultural assimilation so that they do not constitute an obstacle to the Jewish entity and its future in a safe living on the Blessed Land, as a goal of all colonial solutions.

The arbitrators who accepted this crime or those who pretended to oppose it through the media and described it as treason, they all agree on treason, they agree to recognize the legitimacy of a Jewish entity, and cooperate and coordinate with it secretly, at sometimes and openly, at other times. The Arab Initiative proposed full public normalization in exchange for a meagre state on some of Palestine, and their opposition is similar to the opposition to Sadat, who signed the Camp David Agreement, as they described that agreement then as a betrayal, then soon after a short while peace with the occupier on the borders of ‘67 became a demand for the Palestinian Authority and the rulers, and the work to achieve it became a struggle and adherence to the constants! So they became more traitors than Sadat!

The rulers of the Emirates, like all the rulers of the Muslims, only represent themselves that they sold to Satan through their agency to the Western colonialists, and the Ummah is dissociated from them. The Ummah inhabited by the Qur’an and Surat al-Israa only sees the liberation of Palestine as a solution to the issue of the Blessed Land, a legitimate solution that it experienced in Hattin when the hero Salah al-Din swept the Crusaders, and it will experience it in reality when the Ummah’s armies rise up and roar again to raise the banner of Islam on the walls of Jerusalem and the quarters of the Blessed Land, and uproot the Jewish entity forever.

The issue of the Blessed Land is the issue of a great ancient nation that emerged victorious in the greatest wars on the earth, defeating the Crusaders in Hattin and breaking the Mongols in Ain Jalut, and it will rise again to triumph and regain the Blessed Land and all the country, and the Blessed Land will not remain an electoral card in the hands of Trump or anyone else through which he achieves frail political achievements, by instructing the rulers of the Emirates to establish relations with the Jewish entity. It is the issue of a nation seeking to restore its authority by establishing the Khilafah (Caliphate) on the method of Prophethood that will Trump and his groups forget the whisper of demons, thus uprooting his influence and his traitorous followers from the Muslim rulers and restoring the Blessed Land to the bosom of the Islamic Ummah.

These public betrayals and where the Palestinian issue has reached can only be stopped by the movement of the armies of the Islamic Ummah and its leaders and officers to liberate the Blessed Land and uproot the Jewish entity and the traitorous rulers who conspire against the Ummah and its issues. There is no liberation of the Masra and no revival of the Ummah under rulers who obey the orders of the enemies of the Ummah and implement them with dedication and sincerity and promote them as if they were members of the Trump election campaign!

The Ummah should not be silent, but rather is required to move to end this extraordinary era in the lives of Muslims and remove the gloom so that the sun of the second rightly guided Khilafah on the method of Prophethood would rise. Khilafah that does not let Trump and his serf rulers remain and does not leave anything of them.