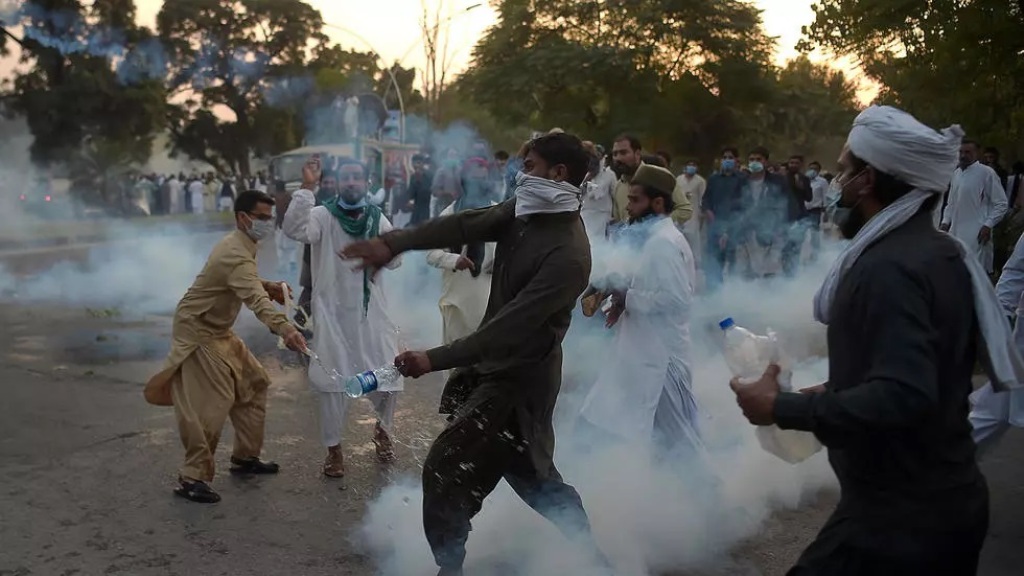 On the same day as addressing a ceremony remembering RasulAllah ﷺ in which Imran Khan stated that Muslim leadership should “take a position” regarding France’s blasphemy, the Bajwa-Imran regime practically demonstrated its position on the matter by firing tear gas at protestors who attempted to demonstrate outside the French embassy in Islamabad, on 30 October 2020. The current rulers of the Muslim World will never take the required position on the issue of blasphemy, because they are loyal guardians of the colonialist world order which the permanent members of the United Nations Security Council, including France, have established. It is the Charter of the United Nations itself which endorses the Western liberal freedoms that ensure repeated attacks on the beloved personality of RasulAllah ﷺ.

The regime has practically demonstrated its position as a loyal guardian for the colonialist world order. Regarding China’s brutal incarceration of hundreds of thousands of Muslims in East Turkestan, the regime first pleaded ignorance on the matter and then declared it a non-issue. Regarding the United States’ violation of Afghanistan, the regime is acting as a hired facilitator to secure a face-saving deal for the retreating troops of US, whilst ensuring the survival of its puppet government in Kabul. Regarding Russia, the Bajwa-Imran regime is busy shaking the hand that has the blood of Muslims of Syria on it. Regarding the former brutal occupiers of the Indian Subcontinent, the British, the Bajwa-Imran regime has opened Pakistan for its poisonous cultural projects designed to undermine Islam.

Despite having the sixth largest army in the world, abundant resources, youthful population and a land mass that is almost as large as Britain and France combined, we are unable to use our full weight in the service of Islam because Pakistan has been tied and shackled to the corrupt colonialist world order by the Bajwa-Imran regime. We will only ever fulfill our duty towards Allah (swt) and His Messenger ﷺ when we are liberated by the ruling by all that Allah (swt) has revealed. In the past the Khilafah (Caliphate) forced the retreat of the crusader states, including blasphemy by both Britain and France, and it is the Khilafah today that will work for the Dawah to Islam globally, granting it dignity and esteem, using all manner of state resources to do so. In the past the Khilafah demolished the corrupt world order established by the Persians and Romans and it is the Khilafah again that will grant relief to the suffering billions of the World by tearing apart the colonialist world order, replacing it by an order established on the Deen of Haq. So let us all strive for the re-establishment of the Khilafah (Caliphate) on the Method of Prophethood, to ensure the supremacy of the Law of Allah (swt) in the world. Allah (swt) said, هُوَ الَّذِي أَرْسَلَ رَسُولَهُ بِالْهُدَى وَدِينِ الْحَقِّ لِيُظْهِرَهُ عَلَى الدِّينِ كُلِّهِ وَلَوْ كَرِهَ الْمُشْرِكُونَ “He is the One Who has sent His Messenger with true guidance and the religion of truth, making it prevail over all others, even to the dismay of the polytheists.” [Surah At-Tawbah 9:33]