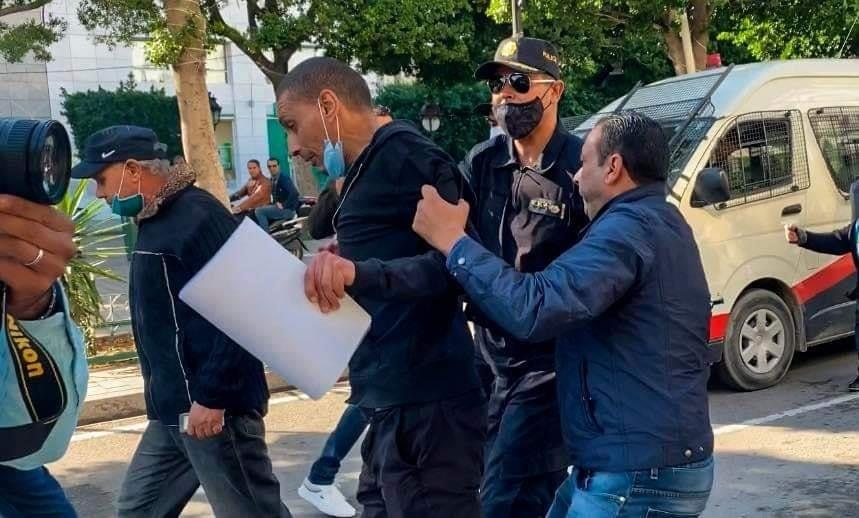 as a Service to the Enemies of Islam

Since the dawn of Thursday, October 29, 2020, the security services have set up barriers at the entrances to Al-Thawra Street in the capital, and have turned the amphitheater of the municipal theater in which the protest is to be carried out into a semi-military barracks, and the barriers have been placed at the entrances to the street looking for the Shabab of the party, and have randomly arrested some of the Shabab and subjected others to pushing and obscene speech…

All that the authority has done in terms of preventing the protest and the barbaric and degrading behaviour with the workers of Hizb ut Tahrir is a state scandal that confirms the eagerness of those in charge of it, and exposes the falsity of their claim to adhere to the constitutional and legal controls that they have placed with their own hands. However, it seems that the title of the protest: “The protest of glory against those who mocked the Messenger of Allah ﷺ and against those who submitted to them, received them and welcomed them from the semi-rulers and their trumpets in Tunisia” has disturbed the residents of the French embassy in the heart of the capital, so they instructed the ruling class, and they in turn mobilised some security services to prevent the protest to distract the party and reduce its voice or silence it.

It is clear that the authority in Tunisia has added to its duties and agenda – by harnessing the security forces to prevent this protest with force and brazenness – adding the option of aligning themselves with the deceitful Macron and the enemies of Islam.

We in the Media Office of Hizb ut Tahrir / Wilayah of Tunisia turn to the good people in the security services, and they are many, praise be to Allah (swt): They want to humiliate your Ummah while you are the stick with which they strike, do you accept that? Will you be neutral?

So be on your natural side; the side of Muhammad ﷺ, the side of your Ummah and your religion… and remember the words of Allah the Almighty who said: إِلَّا تَنصُرُوهُ فَقَدْ نَصَرَهُ اللَّهُ إِذْ أَخْرَجَهُ الَّذِينَ كَفَرُوا ثَانِيَ اثْنَيْنِ إِذْ هُمَا فِي الْغَارِ إِذْ يَقُولُ لِصَاحِبِهِ لَا تَحْزَنْ إِنَّ اللَّهَ مَعَنَا فَأَنزَلَ اللَّهُ سَكِينَتَهُ عَلَيْهِ وَأَيَّدَهُ بِجُنُودٍ لَّمْ تَرَوْهَا وَجَعَلَ كَلِمَةَ الَّذِينَ كَفَرُوا السفلى وَكَلِمَةُ اللَّهِ هِيَ الْعُلْيَا وَاللَّهُ عَزِيزٌ حَكِيمٌ “It does not matter if you believers do not support him, for Allah did in fact support him when the disbelievers drove him out of Mecca and he was only one of two. While they both were in the cave, he reassured his companion, “Do not worry; Allah is certainly with us.” So Allah sent down His serenity upon the Prophet, supported him with forces you believers did not see, and made the word of the disbelievers lowest, while the Word of Allah is supreme. And Allah is Almighty, All-Wise.” [9:40]