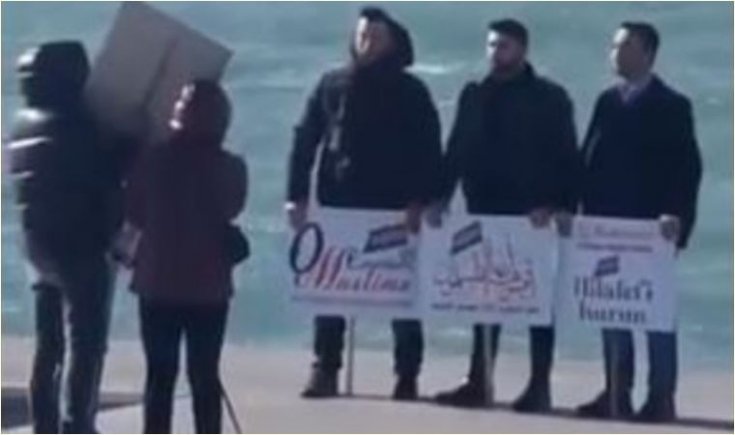 To mark the centenary of the abolition of the Khilafah (Caliphate), on Friday, 29/1/2021, we filmed a video in Uskudar, in Istanbul, under the name of Hizb ut Tahrir / Wilayat of Turkey. While our brothers were filming the video, a secular Kemalist woman known to be a lawyer posted on her social media account, the filming of our brothers and notified the police department. After that, some secular media published false news and tried to discredit and slander Hizb ut Tahrir. Our brothers were arrested around 12 a.m. on Wednesday, 3/2/2021, according to the arrest warrant issued by the Office of the Public Prosecutor of the Republic in Istanbul, which approved the notification of the person who wrote in the post, “ISIS is wandering about and having fun in Istanbul?” I don’t know if you were aware of it. Or did you agree with it?” about the group chanting in Uskudar, “Establish the Khilafah.” In the evening of the following day, the detainees Muhammad Amin Yildirim, Ramadan Gümüş, Mustafa Mert, and Faruq Ozmen were released after being arrested for one day after their statements were submitted. As for Karim Kraheisar, 15 years old, he was released yesterday after two days in detention. We in Hizb ut Tahrir / Wilayah of Turkey, and based on these developments, we reiterate the following:

First: Hizb ut Tahrir is a party that carries out intellectual and political actions. It has nothing to do with violence like ISIS, and it has nothing to do either from near or afar with tyranny and violence. This matter is very clearly known to the Turkish people. Despite this, thuggery and cruelty were the way in which the Istanbul Public Prosecutor’s Office and the Police Department raided our brothers’ homes in the middle of the night, endorsing the post involving black propaganda of an ignorant woman who says she is a lawyer. This is absolutely unacceptable. Moreover, even if the report required an official investigation, the police department could have summoned these brothers to testify over the phone, and they would have responded. This tyrannical approach from the Attorney General’s Office and the Police Department is to intimidate and denigrate Muslims from Hizb ut Tahrir members who are not guilty, and this is a pointless effort. However, Hizb ut Tahrir is very valuable to this society, and you can no longer tarnish its reputation in this way.

Second: The Khilafah has been the longing of Muslims for 100 years, and Istanbul is its capital. And we in Hizb ut Tahrir / Wilayah of Turkey, are working day and night to end this longing of the Muslims in Turkey and the entire Ummah, and we will continue to work until we reach our goal. Our goal is to please Allah (swt). By establishing the Khilafah Rashidah (rightly guided Caliphate) again. However much the secular Kemalists, the enemies of Islam, do not want this, but, Allah willing, the Islamic way of life will resume again with the Khilafah Rashidah. Although 100 years have passed since its abolition, but the Khilafah is the longing, desire and ideal of the Anatolian people; because these lands are mixed with Islam, and Western ideas and beliefs that feed on secularism and democracy can never live here. In this land, there will definitely be no place for the heresies of the LGBTQ community and the derivative organizations that insult Islam and the sacred Ka’ba, and corrupt the land and the people.

Finally, we extend our gratitude to the representatives of non-governmental organizations, journalists, writers, academics and all Muslims who provided their support with statements and posts online after the arrest of our brothers. May Allah be pleased with all those who stand by those working in the cause of Allah (saw).