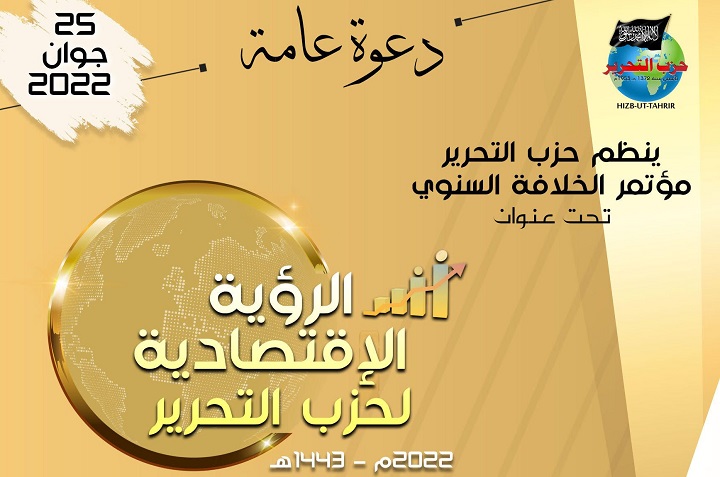 On the 101st painful anniversary of the demolition of the Khilafah (Caliphate), and with the intensification of efforts to reestablish it, so that Muslims can enjoy the heights of glory under it, and regain their lost pride, humiliated dignity and leadership for humanity, Hizb ut Tahrir is holding its annual conference in the Wilayah of Tunisia under the title:

A group of intellectuals, opinion makers and experts from different countries will participate, and through it presents radical solutions to confront the economic crisis that threatens people’s strength and the state entity. Through it, the Hizb will confirm that the Khilafah State that it is working to establish is a state of guardianship and welfare that secures a decent life for those who live under it and provides the basic needs of individuals such as housing, food and clothing, and the basic needs of the people from health, security and education, which is in complete contrast to the state of tax collection, which stems from the doctrine of the separation of religion from the state, that made most people in Tunisia suffer poverty, disease, unemployment and poor care.

The conference will be in three segments, in which the presentation of the economic vision of Hizb ut Tahrir will be presented as follows:

1. The economic crisis in the world and high prices

2. The general and specific causes of the economic crisis in Tunisia

3. The repercussions of the economic crisis in Tunisia

2. The politics of economics in Islam

1. The massive wealth and potential available in Tunisia

2. Budgeting and financing productive projects based on industrial and agricultural sufficiency

4. Islam’s view on currency and solution of the dilemma of the devaluation of the currency

The conference will be held, Allah willing, on Saturday, 26 Dhul Qi’ddah 1443 AH corresponding to June 25, 2022, at 10:00 am at the hall in the headquarters, Soukra-Ariana intersection, in the capital Tunis, and will be broadcasted live on Al-Waqiyah TV channel, Allah willing.

We, in the Media Office of Hizb ut Tahrir in the Wilayah of Tunisia, are pleased to invite Muslims in general, and media professionals, politicians and experts in particular, in Tunisia and the rest of Muslim countries, to participate in this conference, interact with it and cover it in the media.

We ask Allah (swt) to make the conference an insight and guidance for the worlds. Allah (swt) says: