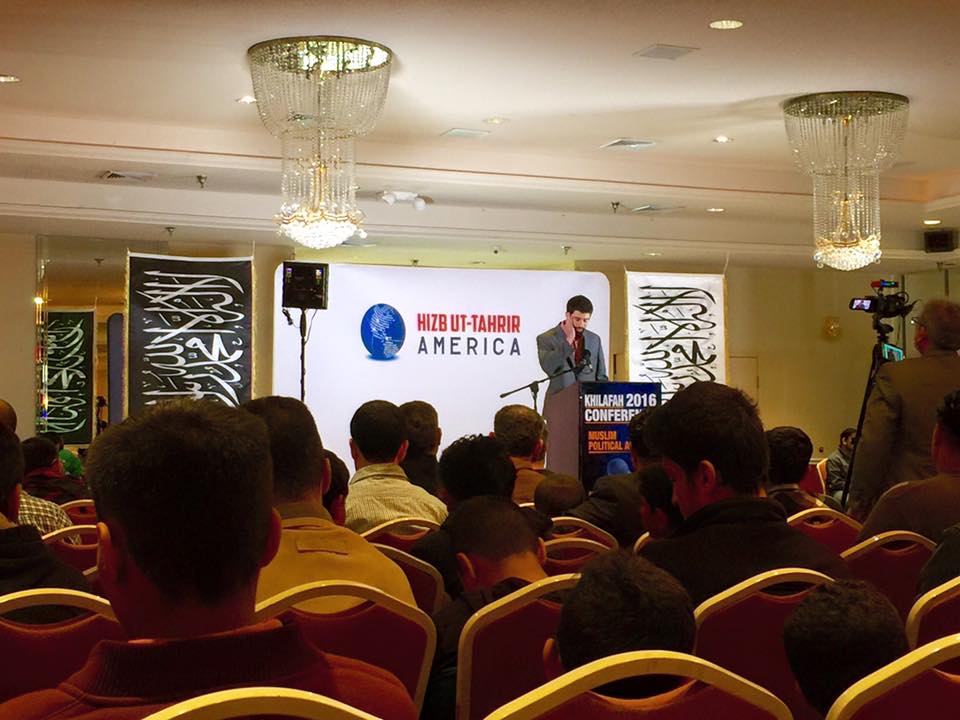 Alhamdulillah, Hizb ut Tahrir / America concluded its annual Khilafah Conference in the Chicago area on Sunday, 8 Sha’ban 1437 AH corresponding to May 15, 2016 CE. This conference is part of a global campaign carried by Hizb ut Tahrir held on the occasion of abolishment of the Khilafah (Caliphate), the Islamic System of Ruling in 1924.  It is a global call to the Muslims worldwide to stand up and fulfill the obligation to resume Islamic way of life as decreed by the Creator of All, Allah سبحانه وتعالى, by reestablishing Khilafah on the way of Prophethood.

Keeping in view the current climate of American Presidential elections and the ever rising pressures on the Muslims to integrate in American society, Hizb ut Tahrir / America selected the theme of, “Muslim Political Activism, Aspiring to the Work of the Prophets.” The theme was selected to remind each and every individual member of the Muslim Ummah that our role as Muslims is to continue the work of the Messengers and the Prophets, of calling people to the obedience of the Creator of All, Allah سبحانه وتعالى, so that all can live in peace and harmony.  It is to remind Muslims that the way of the Messengers and Prophets was neither of integration nor of isolation, rather it was of interaction. They interacted with the nations that they were sent to by presenting to them the Message of Allah سبحانه وتعالى and they showed them the hollowness and falsehood of the ideas and ideals that the people were living by. Moreover, they continued in this blessed call and they had neither capitulated to any sort of pressure nor accepted bribery that was offered to them.

The conference program contained three speeches and concluded with a Question & Answer panel. The first speech, “From Adam (AS) to Prophet Muhammad ﷺ: Continuing the Call of the Prophets and Messengers,” reminded Muslims that the Prophets and Messengers were sent by Allah سبحانه وتعالى with the mission of calling the people to the belief in and obedience of Allah سبحانه وتعالى in all affairs of life. They called the people to this message with bravery and perseverance.

The second speech, “’We have always been here!’ Recognizing our Muslim Roots of Reverence & Perseverance,” helped motivate the Muslims by presenting to them facts that Muslims did not just come to the U.S. in the recent years, instead we have been in the U.S. even before Columbus came to the Americas for the first time. It reminded the Muslims of the struggles of early Muslims in the Americas to maintain Islamic identity and drew lessons of perseverance for Muslims in America today.  Additionally, it recalled some of the contributions of the global Muslims of the past to the fields of sciences that helped elevate the standard of living of people. It also helped the audience understand that when the Muslim Ummah and all its resources were organized according to the Message of Allah سبحانه وتعالى under one Khilafah state, it led to progress in the areas of sciences.

The final speech, “Beyond Ballots: Political Activism in Islam,” helped the Muslims understand that the notion that Muslims should integrate otherwise they will isolate is false by presenting very clearly the path of interaction. This is the path that every Prophet and Messenger of Allah سبحانه وتعالى walked. This is the only path the Muslims in the U.S. as well as the Muslims around the globe have to walk. This path requires that we the Muslims of today present the message of Islam, as the comprehensive way of life that Allah سبحانه وتعالى sent to all of humanity including people in the U.S.  Additionally, it showed them the fallacy of the current thoughts and ideals that people believe in and live by today. This is the path of intellectual struggle. Today Islam is the only alternative for humanity to come out of the misery that we all live in and to live as dignified human beings on the face of this Earth.  It ended with outlining certain practical steps and activities that Muslims in the U.S. can carry out. The conference was concluded by a Questions and Answers panel. Speakers answered questions from the members of the audience.

Hizb ut Tahrir is a global, Islamic political party working to resume the Islamic Way of life by reestablishing the state of Khilafah (Caliphate) upon the method of the Prophethood in the Muslim world. The party does not seek or attempt to establish Khilafah in any of the western countries including the U.S. The party does not use or approve of militant means to achieve its goals.