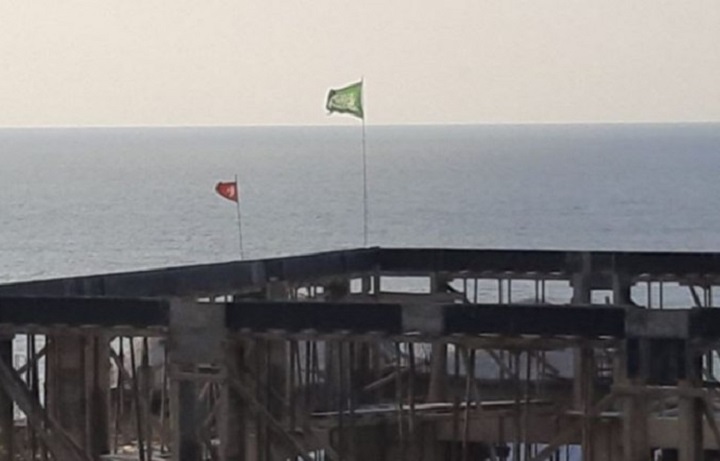 The flag of the Caliphate displayed by a worker on the construction of Kavaklik Mosque which is being made by the Directorate of Religious Affairs in Zonguldak’s Kozlu district was lowered by the decision of the Governorship. The governor of Istanbul Mustafa Tutulmaz, who qualified the display of the flag of the Caliphate with the expression “It’s not a smart business”, said an investigation has been launched into the incident.

Governor Tutulmaz indicated in the statement he made that they will never accept disrespect for the Turkish Flag, and said: “When I first heard about it, I intervened. Our Kozlu District Governorate has launched an investigation. No other flag other than the flag of the Republic of Turkey can be accepted. The flag is our sacred. There’s no way we’re going to accept that, it’s not a smart business. The investigation is ongoing”

Comment:
Unfortunately, indigestion in this direction towards the Flag of Tawhid in the Ak Party government is not the first. About a year ago, when Hagia Sophia was reopened for worship and the issue of the Caliphate was discussed on the Turkish agenda with Hagia Sophia, a police officer named Ismail Belindir posted something on his social media account with the hashtag #Caliphate. The Governorship of Bursa launched an investigation into the guard after some secular Kemalists complained and reacted to the sharing of this police officer. When Hizb-ut Tahrir Turkey members reacted to the governor’s decision and made the issue public, the governorship withdrew the statement and had to make a second statement. In the second statement, it was stated that the reason for the investigation against police officer Ismail Belindir was not the post with the Flag of Tawhid, but because he made this post with the hashtag #Caliphate. In these days where Hagia Sophia is opened and Muslims’ feelings are intense, the Governorship of Bursa had backed down due to the reactions, but today the Governorship of Zonguldak showed intolerance against the Flag of Tawhid which was displayed on a Mosque Construction and not on a public building.

First of all, it is necessary to congratulate both Ismail Belindir, who shared the Flag of Tawhid and wanted a Caliphate, and our brother, who displayed the Flag of Tawhid on the construction of a mosque, because both of them have contributed to the fact that “La Ilaha Illallah Muhammadur Rasulullah” is brought to agenda and spoken about. They glorified the word of truth. May Allah forgive their sins because of their sincere deeds. Although the Governors say it’s not a smart business with reference to these good deeds which glorify the Flag of Tawhid, planting the Flag of Tawhid on a Mosque construction and bringing it up by identifying it with the Caliphate are from the good deeds and from the deeds of smart people.

What encourages governors and local authorities so much against Islam and its values and what makes governors and local authorities so angry about the Flag of Tawhid which glorifies the word of Allah? It is the secular Kemalist ideology in Turkey. You can say, is there still Kemalism in Turkey? Yes, there is, and the Ak Party and its partner MHP are more being fed from Kemalism than CHP. On the one hand, the Ak Party and President Erdogan are opening Hagia Sophia, which Kemalism had turned into a museum, but on the other hand, it is oppressing Muslims who are happy that Hagia Sophia has become a mosque and express their feelings, expectations and longings by linking it with Islam, the Caliphate and the Flag of Tawhid. In fact, the government is just stalling Muslims with Islamic references and trying to put them to sleep.

Ak Party and President Erdogan know very well what La Ilaha Illallah on the Flag of Tawhid means. Although they know it, they do not bring the governors and local authorities, who cannot tolerate the flying of Allah’s word in the sky, to book because of their deeds. Not only that, but during the anniversary celebrations of the Great Offensive of August 30, they consider the migration to the Islamic State in Medina where the Flag of Tawhid flew for the first time as the symbol of the state, equal to the Republic established by the abolition of the Caliphate. They are doing it under the pressure of secular Kemalists. They are doing it to protect their seat from the 2023 elections. They do not know that no matter how much pressure they put, no matter how intolerant they may be, the Tawhid and the Caliphate are at the heart of this people, and they will not be able to rip out Islam and the Tawhid from the hearts of this people. And the Flag of Tawhid, which was taken down from the construction of the mosque, will surely fly from public buildings one day.