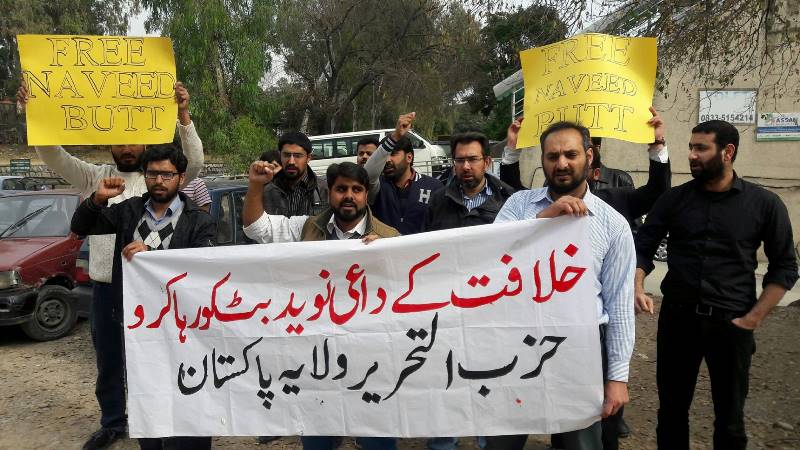 I first met Naveed Butt at a dars he was addressing in Aziz Bhatti Park in Karachi, well before I became a member of Hizb ut Tahrir. Tall, broad, fair skinned with a well-kept beard, he cut the figure of a handsome man, but wore modest and sober attire. After that first meeting, I met him twice more, though only briefly, not having the opportunity to converse much with him. Nonetheless, I was deeply impressed by his beautiful way of talking and speech. Some time after I became a member of Hizb ut Tahrir, I was assigned to the Media Office of Hizb ut Tahrir in Pakistan, becoming Naveed’s deputy spokesperson. After becoming his deputy, I had the golden opportunity to spend time with him, learning much from him.

The first thing about him which surprised me was that very few people in the Hizb called him Naveed Butt. Most people called him “Maamoo” (maternal uncle). When I asked someone why that was, I was told that one of his sisters’ sons is in the Hizb as well, so since he calls him Maamoo, everyone now calls him Maamoo. I also liked to call him Maamoo, although my relationship with him developed in a way that he was more like my elder brother.

I remember a few incidences regarding Maamoo which I can never forget.

Maamoo used to visit Karachi once or twice a year, during which I accompanied him in meetings with media people. Once, when he was on visit, we met a resident editor of a daily Urdu paper. The resident editor became very impressed with Maamoo and took us to meet his lawyer friend. The lawyer was not ready to accept that Quran and Sunnah gives us detailed laws for ruling, economy and judiciary, saying that he never saw such in the Quran. So, Maamoo simply asked him, does the Constitution of Pakistan gives us any detailed laws? The lawyer started looking at Maamoo’s face with surprise. Then, Maamoo elaborated that these numerous law books in his office are extracted from this same Constitution of Pakistan, providing details of this particular system, implemented in Pakistan. After this Maamoo presented a number of names of famous Islamic jurisprudence (fiqh) books, asking whether the lawyer had read them. The lawyer admitted that he had not read them. So Maamoo asked, how you can say that Quran and Sunnah does not give any system of life, if you have not read these books? And I was amazed at how Maamoo knew so many Islamic jurisprudence (fiqh) books.

Similarly, during another visit, we became thirsty on a hot afternoon, so we stopped at a cold drink shop, where I ordered Apple Sidra. I like Apple Sidra a lot, since my childhood, but it is not usually readily available. Maamoo accepted that I buy the drink, but then asked me to bring another drink. I asked Maamoo, why are you not drinking it, is something wrong? He said that I have some doubt, about whether it is permissible to drink Apple Sidra. I said there is nothing wrong with it, but if you are not satisfied than I also will not drink it.  He once again proved his command over Islamic jurisprudence (fiqh), by saying that you can drink as you are satisfied, but I cannot, as I have doubt. Usually leaders impose their will on others, but Maamoo did not impose his understanding on me at all, leaving me to act according to my own understanding.

There is another event I can never forget, whilst writing about it, I have tears in my eyes. Maamoo used to care about us a lot, such that even if we had not shared our economic woes and other worries about life with him, he would know about them, somehow. Once he gave me fifty thousand rupees, so I asked Maamoo, why are you giving this to me? He said that I have received some money from inheritance and I know you are facing difficulties, so that is why I am giving this money to you. I said Maamoo you are not well-off either, so now that you have received some money from inheritance, you must spend it on your family, as you are not responsible for me. However, he forced me to accept that money. That day I really felt that I have an elder brother. After that incident, he gave me thirty thousand, at another time.

The day I received the news of the abduction of Maamoo, I was on my way from my city to meet him and I was asked to go back. That day, until a month, after his abduction were most difficult days of my life. However, then I got settled, with the support of the Shabab, I started to compensate for his absence, so that the day he comes back, he will not be saddened that his deputy could not demonstrate how well he trained him. This is even though, when I evaluate myself, I think I have not demonstrated even ten percent of him. During these eight years of his abduction, I have seen him many times in my dreams and I always see him in good condition. I try to ensure that no Salah is performed without my making Dua to Allah (swt) for Naveed’s prompt and safe return. In my life, if I have any other intense desire other than the re-establishment of the Khilafah (Caliphate) on the Method of the Prophethood, it is that I want to embrace Maamoo once more.