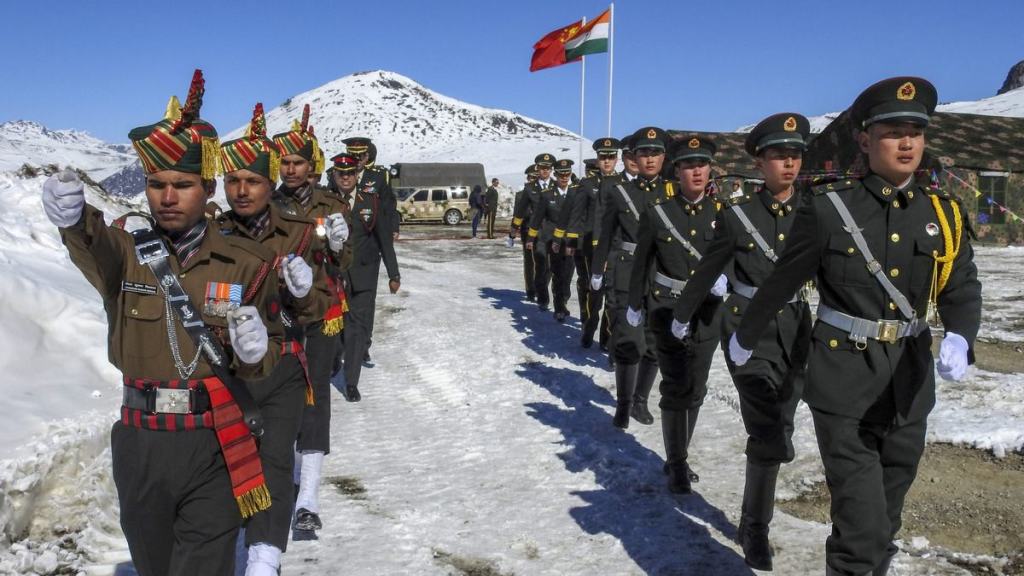 Recently, China has moved thousands of troops along Line of Actual Control (LAC) heightening tensions with its neigbour India. To counter these measures, India has deployed several battalions to reinforce its troops. Tensions between the two nuclear powers have been simmering for a while, however, the latest military maneuvers risk a repeat of the 1962 Sino-Indian war.

Back then, the 3,225 kilometer long Himalayan border separating India and China became a flash point at Aksai Chin. India claimed Aksai Chin as part of Kashmir, and China regarded it as part of Xinjiang. A brief war resulted in China seizing control of Aksai Chin and converting the LAC into a de facto border. India never formally recognized the border and over the years have spawned numerous skirmishes and intrusions across LAC by both parties.

Complicating matters is Trump’s offer to mediate and this has aroused suspicions in Beijing that Washington and New Delhi are deliberately beating the drums of war. China suffering from its trade war with the US was further spooked by America’s global campaign to pursue retribution against China for starting Covid-19.  The US sent warships to patrol international waters in the South China Sea, and the US Commerce Department effectively prohibited semiconductor sales to Huawei. The latter calls into question China’s ambitions to dominate 5G and AI, and to provide communication infrastructure for its showpiece Belt Road Initiative (BRI).

China also fears greater American interference in internal matters. The US is extremely vocal about China’s role in Hong Kong, and the US just passed a bill that penalizes Chinese officials responsible for the oppression of Uighur Muslims. Another bill is in the pipeline seeking to punish China’s mistreatment of Tibetans. Sovereignty over Tibet is the primary reason why China fought India in 1962, as New Dehli was fueling a rebellion in the province.

Evidently, China’s military build-up on the LAC is part of an overall strategy designed to insulate China from American attempts at destabilization. Beijing is also shoring up its defenses in the South China Sea by constructing military bases on several islands. Besides bolstering military defenses, China tightened its grip over Hong Kong through a new security plan that permits Peoples Liberation Army (PLA) to restore order by force. Furthermore, China has used its economic muscle to punish Australia—imposed 80% tariffs on barley import—for suggesting an independent investigation into the origins Covid-19.

On the surface it may appear that America has pushed China into a corner, undermining its capacity to fight back. This is a false assertion. In military terms, China possess a distinct advantage over all of America’s allies in the region.  India, South Korea, Japan and Australia heavily rely on American power to even the odds against China. Since 2008, America’s ability to project and sustain power is diminished. The US amended its military doctrine to fight one Great War and not two. The humiliation suffered in Afghanistan by an irregular army and Trump’s desperation to withdraw permanently tarnished America’s prestige.

From an economic standpoint, China has recovered well from Covid-19, while the US economy is still in the doldrums. With a general election fast approaching, Trump cannot risk a war. Moreover, the Soviet Union’s GDP was 50% of America’s GDP, and Soviets competed with America head-to-head for over forty years. Today, China’s GDP is 65% of America’s GDP, and is projected to overtake America in a few years. So if a war does breakout between India and China, does America have the capability to deter China? Unlikely. In 2008 and 2014, America was powerless to prevent Russia from invading Georgia and annexing Crimea from Ukraine. China of 2020 is much stronger than Russia, and poses a serious challenge to American primacy in the Asian Pacific, and parts of Eurasia.

Should war occur between India and China, Pakistan will be presented with its best opportunity since 1947 to liberate Kashmir for good. Rather than confront the full conventional might of Indian armed forces, Pakistan will face a reduced but overstretched Indian military. With the Kashmiri population fully on the side of Pakistan, the probability of emancipating Kashmir from Hindu rule is high. Pakistan’s nuclear weapons should ensure that its armed forces can work within the ambit of conventional military tactics to achieve a resounding political victory over India.

There is very little risk of a nuclear war. On the contrary, nuclear weapons serve to prevent conventional conflicts escalating into nuclear wars. This is exactly what happened during the Kargil conflict in 1999, and also during the Sino-Russian border war of 1968. Victory could be swift, if Pakistan mobilizes India’s 250m Muslims—who have been gravely terrorized by the BJP—to commit mass civil disobedience and coordinates its military activities with China.

For collaboration with China to succeed, Pakistan must reassure Beijing that Islamabad will not assist India at the behest of America. In 1962, Ayub Khan supported American policy by overtly remaining neutral but covertly aided India by stoking Tibetan nationalism against Beijing.  There is little doubt that Modi and Trump will ask Imran Khan to do the same.

Previous governments exclusively tied Pakistan’s national security with American interests and suffered.  Pakistan gave the upper hand to India over Kashmir in 1965, lost East Pakistan in 1971, was abandoned after the Afghan jihad in 1990s and surrendered its strategic depth in 2001. But worst of all, America ditched Pakistan after 9/11 and made India its principal agent in the region. Do Imran Khan and Bajwa possess the moral confidence to make a clean break from American servitude and liberate Kashmir? We all know the answer to this.