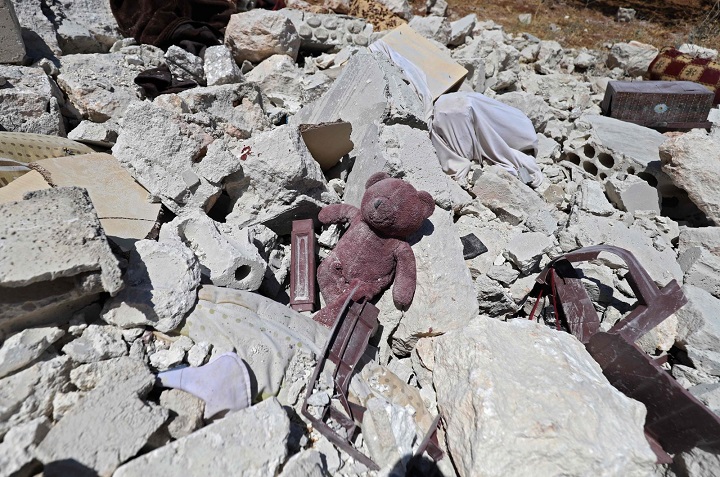 On Friday, 20/8/2021, Assad forces and its ally, Russia, targeted the town of Kansafra with a number of artillery rockets, which led to the death of 4 children from the same family and the injury of two other civilians. These forces repeatedly target the villages of Jabal Az-Zawiya. In a similar incident, Assad forces committed, on Thursday dawn, a massacre of 3 children, their mother and another child in the village of Balshon, as a result of shelling by Russian Krasnopol missiles.

It is a massacre, with all that the phrase implies of terrorism, criminality and brutality. The bodies of the children were blown to pieces, only a hand remained from them that the father of one of the victims bid farewell to with stinging pain of injustice as he wished to see his son’s face to give him one final look.

So, who are the terrorists?! These innocent sleeping children, or their criminal murderers who continue to harm them and the women? At least 13 children have been killed in northwest Syria during the past three days, most were between 4 and 14 years old, including a baby who did not yet reached the age of one, according to Save the Children organization, so what terrorism are they talking about?! Aren’t they the ones who carry it out and master it? Allah is sufficient for us and is the Best Supporter.

They raise false slogans and work to abort the attempts of the people of Ash-Sham to liberate themselves from Bashar’s oppression and criminality and to overthrow his kaffir regime that fights the establishment of the great civilization project, whose features have begun to appear on the horizon. Despite the ceasefire agreement signed on 5/3/2020, the butcher and his supporters did not abide by this agreement and persisted in their crimes against the people of Idlib. Indeed, they – and Russia in particular – do not consider their attacks and killings a violation of the ceasefire, but rather a routine bombing!

The suffering of Syrian children has worsened as a result of the war, and the subsequent forced migration and displacement, which prompted many of them to work to meet the needs and requirements of their families, exposing them to death “under a rubbish heap in a landfill near Idlib city while collecting some things that can be used and sold.” So, who are the terrorists?! These innocent children who knew nothing about life but misery and affliction, or those criminals who spread death and destruction?

O our People in Idlib and Ash-Sham: Children are the future and they are an extension of life. What Bashar the criminal and his aides are doing is nothing but an effort to abort your resolve and discourage you until you surrender to him, support him and abandon your blessed revolution in which you call for the overthrow of his oppressive regime, and the rule of Allah’s perfect and just system.

What a world of difference between a system that does not honour any kinship with you or covenant, kills children and women and spread death and destruction, and between the System of the Lord of the worlds that forbids evil and spreads mercy, tranquility and prosperity. On the authority of Nafi from Ibn Umar (ra):

“…that the Messenger of Allah, may Allah bless him and grant him peace, saw the corpse of a woman who had been slain in one of the raids, and he disapproved of it and forbade the killing of women and children” [Narrated by Ahmad].

O our People in Idlib and Ash-Sham: the enemies have summoned each other and attacked your blessed revolution. You were let down by those who claim that they are your (friends), and you have nothing but to hold on to the lifeline of the khair (good) in this world and the Hereafter, and adhere to your slogan, which you raised since its inception, “It is for Allah, it is for Allah.” So, make it for Allah and demand the System of the Lord of the worlds to be implemented over you and be the first to support this Deen and restore its honour. By Allah, it is for a great honour for you.