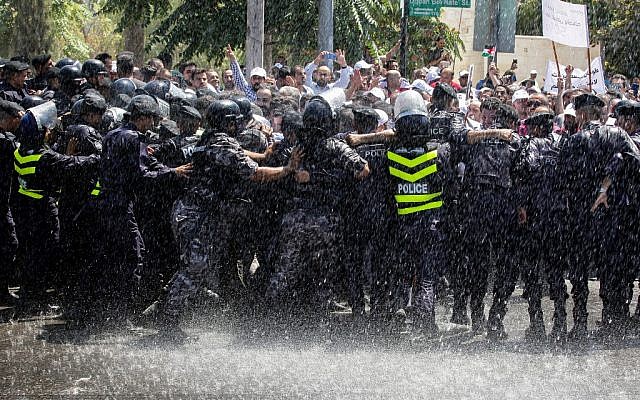 On Thursday 5/9/2019, the Jordanian security services suppressed teachers who tried to stage a sit-in in front of the Prime Minister’s office at noon to demand better living conditions and a 50% professional allowance.

A quick closer look at the events experienced by people in all their professional and living sectors shows that the situation is deteriorating steadily and is moving from bad to worse by any measure. This year is worse than the previous year, and today is worse than yesterday, and there is no glimmer of hope in the near and far perspective, except stones boiling in the pot of the Jordanian regime to distract people until the next crisis!

Although life conditions are the main catalyst of people’s feelings and their various movements against injustice and oppression, they do reflect the Ummah’s rejection of the  rampant corruption in the country; whether in the secular ruling system and the submission and political subordination to the Ummah’s enemies in its vital issues, be they the colonial Kaffir West or the monstrous Jewish entity, or corruption in the failure and fraud in taking genuine care of the affairs of the Ummah that provides a decent living approved by Islam of housing, food, clothing, health, security and education for them. This education, which has fallen to poor levels, both in the formation of the Islamic personality and in experimental science, as admitted by education ministers who carried out instruction at all levels. One of the reasons for this is the poor conditions of teachers, which makes their interests focus on thinking about how to satisfy their basic needs rather than devoting themselves to high-quality education, as is the case with all other professional sectors. The Messenger of Allah (saw) said:

“Any servant whom Allah makes him in charge of subjects and he dies while he is not sincere to them, Allah will make Jannah unlawful for him”.

There is no doubt that addressing the situations that lead the country and the people from one bottom to another over the decades deserves from the Ummah a serious, enlightened and hard look at the reasons that led and continue to lead to this horrible reality. This horrible reality that it makes the source of its thinking rather than the subject of its thinking, hence, it falls in the mistake of partial hasty solutions whenit derives its solutions from the corrupt reality which is based on the exclusion of Islam from ruling and the separation of religion from life, and joins the regime and the state in the so-called false democracy game and resort to the corrupt man-made constitution, thus, its demands become constrained by the framework of corruption. So, does the fall of a government change reality since governments have fallen, and the latest of which is in recent memory. And is the problem really solved by obtaining allowances that do not benefit and become consumed in return for the unjust taxes imposed by the colonial Monetary Fund by the regime’s abandonment?! Whereas Islam imposed on the Islamic State to satisfy all the basic needs of every individual of its citizens, and to exert its utmost to enable them to satisfy their needs of luxury.

Rotation of governments that the regime brings whenever the smell of their failure suffocate noses as they try hard to comply with the commissioning letters, will not stop their repressive hand and brutal attacks on you, whatever the name of their president, and you are the beacons of education and culturing for the children of the Ummah that depends on you to rise from its repression, and delivering the Trust (Amanah) that the Lord of the worlds has charged you with and all the Ummah with you, which is to make Islam and its ideology the basis of your thinking and treatment of your situation and the deteriorating situation of the Ummah. The future and leading generations are a trust in your necks, so as to rise with the meanings of dignity and honor that the Messenger of Allah (saw) elevated his companions with, therefore Islam spread to the world by their resolution and their devotion to Allah (swt) and their Jihad in His way. This was only and can only be by the arbitration of the Shar’a in their upbringing and raising them to become Islamic personalities and statesmen such as the Companions, may Allah be pleased with them.

It is time for you to make your Deen the only subject of your thinking when you move in order to achieve your glory and lift injustice from you and restore your honor that was lost by the loss of the State of Islam, when the Khilafah (Caliphate) State and its political entity were excluded from ruling. And you must make the goals that you want to achieve based on attaining the satisfaction of Allah Almighty, and treading on the method of the Prophethood with awareness, thought and legislation from the Subtle, the Acquainted, in your way towards reaching your goals, by not taking desires and the reality as a path other than the path of Allah and then you will fail and will be dispersed. Allah (swt) said:

“And, [moreover], this is My path, which is straight, so follow it; and do not follow [other] ways, for you will be separated from His way. This has He instructed you that you may become righteous.”
[Al-An’am: 153]

The Islamic State on the method of the Prophethood, that we are working for and we continue to call on the Ummah to work with us to establish it over the past decades, is the only way to achieve your honor and dignity and achieve justice among you by the application of Allah’s law, which eradicates the control of the Kaffir colonial West on our country and prevents its plundering of our wealth and its imposition of the provisions of Kufr on our relations and on the Constitution that we rule by, which angers Allah Almighty and spread vice and obscenity among our children through those who are deluded by its culture of rulers, scholars of sultans and secularists. And do not be tempted by the power of America, Europe, Russia and the monstrous Jewish entity, for they have not been empowered over us except by the subjection of our rulers to them; Allah is greater than them and Allah defends those who believe. So, there is never a place to fear them and their henchmen, rather, it is not permissible to give them any consideration in our march towards the establishment of the Khilafah Rashidah (rightly guided Caliphate) on the method of the Prophethood, which they are shivering from it, Allah Almighty says:

“Is not Allah sufficient for His Servant [Prophet Muhammad]? And [yet], they threaten you with those [they worship] other than Him. And whoever Allah leaves astray – for him there is no guide.”
[Az-Zumar: 36]