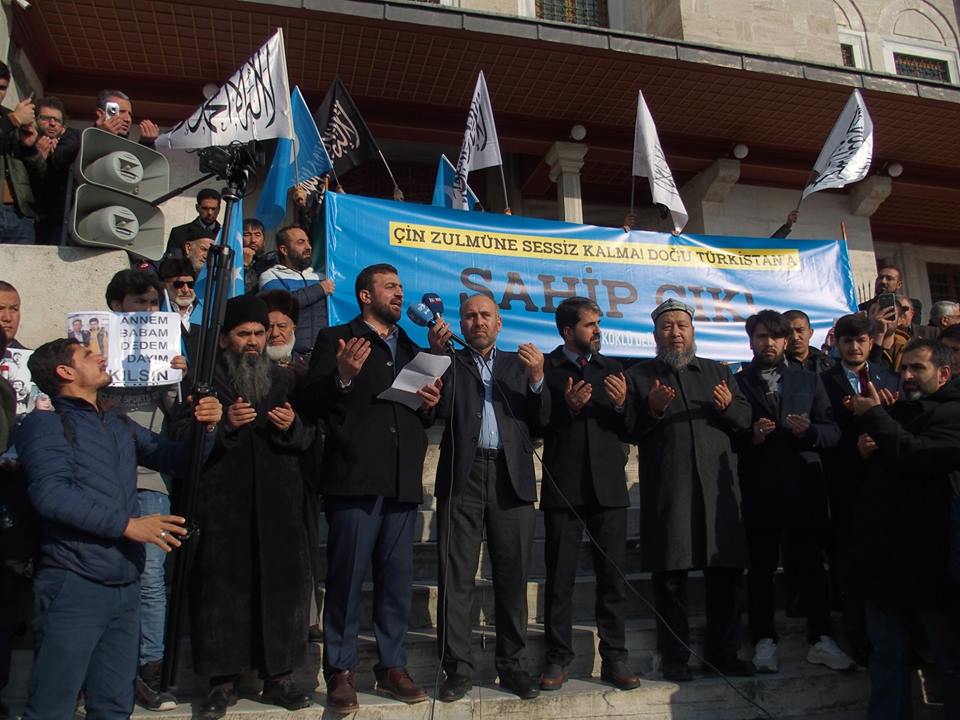 Hizb ut Tahrir / Wilayah of Turkey organized a press conference today entitled “Support East Turkestan… Do not stand silent in the face of China’s injustice”, after Friday prayers at the Malika Khatun Mosque in Ankara and the Al-Fateh Mosque in Istanbul. A large number of immigrants from East Turkestan participated in the conference. The press release addressed the following issues:

There are no expressions that describe the grievances in East Turkestan; our brothers are being shackled and hanged on the gallows, cement concrete is being poured into their mouths and they are suffocated, our sisters are being forbidden from conceiving and giving birth, men are being castrated, and the Kaffir Chinese regime places a Chinese man in every Muslim house without any regard to privacy or the presence of Maharim. One million Muslims are languishing in concentration camps…

Here from Turkey, we declare a cry in the face of colonial China! You will never be able to extinguish the light of Allah! The faith of the believers is not fragile like the atheism you believe in, nor the kind that is abandoned at the first difficult turn! And you know very well that you oppress the Uighur Muslims without fear as you inspire your boldness from the regimes that prevail in the lands of the Muslims. And that your reckless aggression on Islam and Muslims stems from the hypocrisy that prevails in the international community… But know also that the Messenger of Allah(saw) ) gave us the glad-tidings of the second Khilafah Rashidah (Righteous Caliphate) State on the method of Prophethood, and then the Muslims will hold all oppressors accountable by the will of Allah and these oppressors will receive the response that they deserve; (the state) which will be a shield, behind whom people fight, and with whom they are protected!

Oh Rulers of the Muslim lands! Originally, Uighur Muslims are your brothers and sisters, and East Turkestan is part of this Ummah. Some of them have taken refuge in our countries to save themselves and their honour from the Chinese regime. They have committed no crime except that they say Allah is our Lord and we are Muslims. They have been subjected to various kinds of repression in their country, or have your ears become deaf to their woes?! Or have the cries of our Muslim sisters due to their honour being violated at the hands of the sinful hit the walls of your palaces, and not reached your ears? Have you not heard these grievances or have your hearts turned into deaf stones? You are easily and eagerly ready to fight the wars for America, but what are you doing for the Muslims? Or will you look at your budgets and political calculations? Will you ignore your Lord’s account for the debts you have received from China? Will you continue to proclaim the legitimacy of this colonialism by saying “we recognize the unity of Chinese territory”? Do not forget that the promise of Allah Almighty and the calculations of our Lord are above all your realistic political calculations. And know that when Allah’s promise is fulfilled, remorse will not be of benefit to you…”

Oh Muslims! Beware of deafening your ears to the cries that are rising in East Turkestan! Do not be like the rulers standing idly by before your brothers’ please! Account the rulers on their silence in front of these cries! Do not turn your hatred towards Communist China alone, but also call unto the rulers, who are defeatists in giving victory to the Muslims, to what this victory entails. And work for the establishment of the Khilafah Rashidah State on the method of Prophethood, which will hold these oppressors accountable and stand in the face of these injustices.