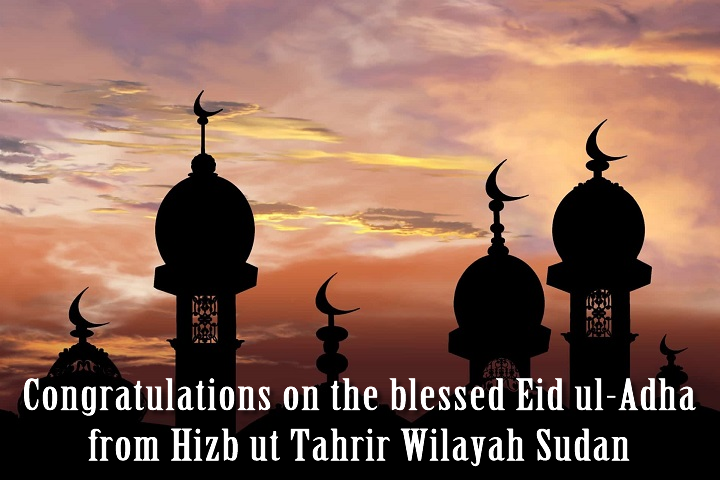 We in Hizb ut Tahrir / Wilayah of Sudan would like to congratulate the entire Islamic Ummah on the blessed Eid al-Adha, asking Allah (swt) for its return and the message of the Ummah has united under the banner of the beloved Muhammad (saw) in the Khilafah Rashidah (rightly-guided Caliphate) State on the method of the Prophethood.

We congratulate you with a heavy heart due to the political vacuum and security chaos that our country is witnessing, in which blood is shed in senseless wars in Darfur and elsewhere, and young people are dying for the sake of the “civil state” that they were deluded by as being the system that takes the country out of its crisis. These young people did not know that the civil and military state are two sides of the coin, that is secularism which is based on the separation of religion from life, and the dependence on the kuffar, the colonialist, the main controller of the politics of the country and people through its international and regional organizations.

We congratulate you, and the situation of the people and their living conditions have become impossible in a country that Allah (swt) has blessed with seen and hidden bounties, but the politicians who are submissive to international usury funds have impoverished the people, and allowed their wealth to be plundered by the enemies, so our situation has become like the camel in the desert that is suffering with thirst, and the water is carried above its back!

While we are in these difficult circumstances, and our country is at a crossroads, we send these messages:

First: To the political forces: Fear Allah regarding this Ummah, for you are Muslims, sons of Muslims, come back to your senses, cut your ties with your enemy, and connect them to the Lord of the worlds, and make the application of Islam the issue of your life, and work to establish the Islamic state; the Khilafah Rashidah on the method of Prophethood, and win in the two worlds.

Second: To our youth: Do not be a tool for the helpers of the colonial kuffar who lead you to death in order to invest your blood for the sake of the thrones, and tell you that you are martyrs, for the true martyrdom that is granted Paradise by Allah (swt) is the one for His sake (swt). So go out to demand the Khilafah, not the civil state. Indeed, it is the Khilafah alone is what guarantees for you a decent life and the pleasure of the Most Merciful.

Third: To Al-Burhan and the military leaders, officers and soldiers: You are the people of power and protection, so do not be the protectors of falsehood, but give the support (Nusra)to Hizb ut Tahrir to uproot the colonialist kuffar, and to establish with the Ummah the Khilafah Rashidah on the method of Prophethood, and be like the supporters (Ansar) who supported the Messenger of Allah (saw) and established the first Islamic state in Medina.