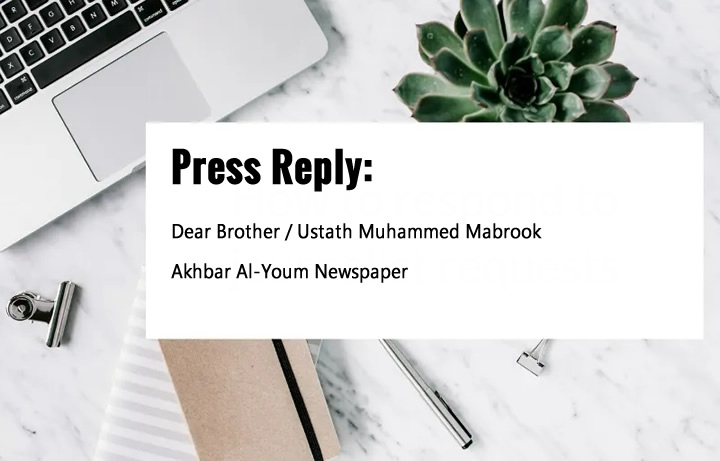 Subject: A Response to your Article (My Disagreement with Abu Khalil)

I would like to thank you for allowing me to comment on some of what was stated in your article entitled: “My Disagreement with Abu Khalil” in your informative column: (The Talk of the People of the Houses) in Akhbar Al-Youm Newspaper published on Wednesday, 08/09/2022, so I say with the help of Allah (swt):

First: I am not the one who believes that it is the ruler’s duty to take full care of the citizen, but rather it is the great revelation that made the ruler a shepherd, and responsible for the flock. The Prophet (saw) said:

“The imam who is over the people is a shepherd and is responsible for his flock”.

And it is a responsibility if it is not the same as the responsibility of the father for his children, then it is the greatest rank and the highest responsibility, and Imam Al-Hasan Al-Basri describes this responsibility in words. So he says advising Khalifah (Caliph) Omar bin Abdul Aziz: “Know, commander of Believers, that Allah has made the just Imam the prop of every learner, the straightener of every deviator, the reform of all corrupt, the strength of all weak, the justice of all oppressed, the refuge of all who are pitied. The just Imam, O commander of Believers, is like a herdsman, solicitous for the camels he tends, desiring the sweetest pasture for them, driving them away from any dangerous grazing place, protecting them from beast of prey, and shielding them from the harms of heat and cold. The just Imam, O Commander of the Believers, is like a father who is caring for his children, he strives for them when they are young, teaches them when they are old, earns for them during his life, and saves for them after his death…etc.”

Second: Your talk about the breeding of mosquitoes, malaria and hygiene was an exposure that the conscious understand, and the ignorant ignore, for we know that you are mocking the dreadful reality we live in because of the lack of care from our rulers who only care about looting what is in our pockets.

Third: Yes, we want our country to be clean and healthier than the countries you mentioned, and why not, do we lack money or capabilities?! We are lacking in nothing but men based on a clear political idea that takes care of our affairs and works for the comfort of the people, and this will only happen under the Islamic state; the Khilafah (Caliphate).

Fourth: The governor of Khartoum, like the other governors and rulers, do not implement the systems of Islam so how can we expect from them the care that Islam enjoins; because they only make promises and do not fulfill, and in addition the responsibility for draining water, transporting waste, and cleaning the streets is not the responsibility of the youth. Rather, it is the responsibility of the state, which is carried out, out of care, and not as a reminder of their generosity or out of favour.

In conclusion: I know that there is no disagreement between you and me as long as we submit to Allah’s affair, seek His pleasure, and believe that there is no way out for the Ummah except by arbitrating its law, and establishing its justice under his state, the second Khilafah Rashidah (rightly-guided Caliphate) upon the method of the Prophethood, whose time has come and you have all my thanks and appreciation. (saw)