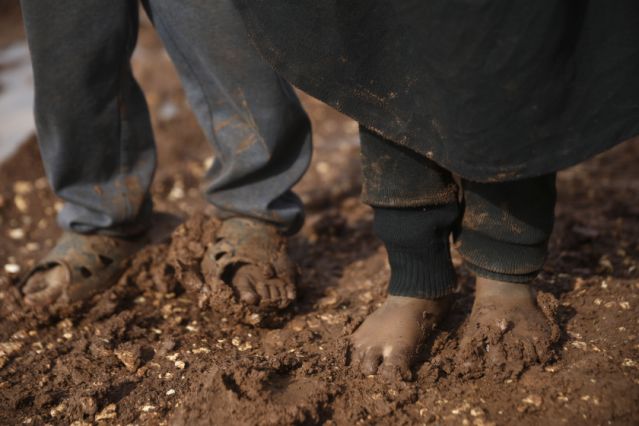 The Syrian Civil Defense said that the number of camps for the displaced that have been damaged by rain and snow in the Idlib Governorate (northwestern Syria) has risen to 225, indicating that the number of families who are now out in the open has reached 3,200. The Civil Defense explained that this number is expected to increase due to the nature of the area and the lack of preventive means to protect from flooding, such as earth mounds and drainage canals.

Two children died in camps in northern Idlib last Wednesday, as a result of the severe cold, harsh weather conditions and snow that swept through northern Syria. Another child died the day before, and three children were injured as a result of the collapse of their block material tent, following heavy rains.

The suffering of thousands of displaced people in the camps of Idlib Governorate is exacerbated every winter, as informal camps spread in conjunction with the military campaign launched by the brutal Syrian regime. This suffering, has been repeated for 9 years in camps that lack infrastructure, and are in agricultural land where the displaced have set up their tents. They are helpless after they found no other place to go to, after the brutal bombing that forced millions of civilians to flee to areas near the Turkish-Syrian border in Idlib. They feel stuck and stranded. They cannot enter Turkey, they cannot return to their homes, and they cannot get adequate aid as the situation worsens, as hundreds of thousands of families have been forced to live in tents after they were unable to secure their homes.

The displaced in these camps live in poor living conditions with fear of the future, in light of the severe weakness of the response of international organizations and relief societies. They lack food, medicine, heating and all the necessities of life, especially with the advent of the frost wave, when the temperatures reached below zero at night. This came before rainy days, in which rainwater stormed the tents of the displaced as they slept, and flooded modest possessions of clothes and blankets, and their camp turned into pools and swamps of mud as it does every winter.

At the beginning of the displacement crisis, relief institutions and United Nations humanitarian organizations competed in holding successive conferences to collect donations and grants from friendly countries in order to devise quick solutions to end this crisis and to alleviate the suffering of the displaced fleeing the brutality of the tyrannical Syrian regime and its allies.

The long bitter years that pass by without radical solutions, not even patchwork solutions, reveal to us again and again:

– That these organizations are not humanitarian, but rather exploitative organizations for this humanitarian case, as it turned into an annual profit file, which do not go passed the deceptive collection of donations and grants which in reality deliver nothing but crumbs.

– That friendly countries are conspiring countries that have failed grieving women and oppressed children who lack the simplest necessity of warmth; children whose age is the age of the crisis. So what future awaits them in camps with these poor conditions that are not suitable even for animals? May Allah protect you from this. This is over the course of the difficult years because of the real crisis which exists even without the snowstorms?!

– That this almost complete neglect of the conditions of the people of the camps and others, is part of the series of deception and constriction in order that they accept any solutions engineered by America; under the claim that “there is no salvation for you except by returning to the hangar of the executioners.” The Baathist criminal regime and its allies are not the only cause of the suffering of our people in the camps. Their partners in this are also all those who have failed or neglected finding a radical solution to stop the suffering of all the people of Ash-Sham, not just the suffering of the camp’s residents.

Supporting the vulnerable Muslims in Syria and relieving their suffering is not a favour or charity, but rather a duty required by the brotherhood of the Islamic belief, and the noble verses and Hadiths call for it. Allah (swt) says:

– The time has come to work to mobilize the Ummah’s saviors around a project of salvation that is at the core of our belief, the project of the Khilafah (Caliphate), for nothing else guarantees the uniting of efforts to topple the regime in its own abode, so that the suffering of our people will end with it, and for such a project let the workers work.

Oh Allah, support us, give us relief from our distress, and hasten the establishment of the Islamic State. Oh Allah, ease the cold of winter on the homeless, and have mercy on the poor suffering from the severity of the cold.

“And never think that Allah is unaware of what the wrongdoers do. He only delays them for a Day when eyes will stare [in horror]” [Ibrahim: 42]