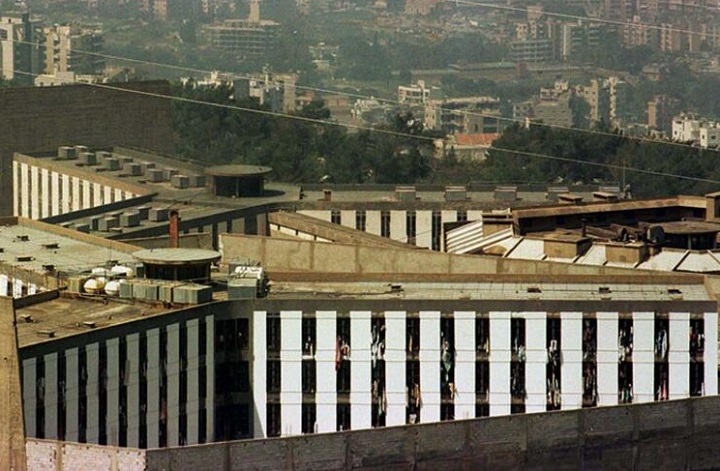 In light of the Lebanese authority’s abandonment of the simplest forms of human interaction, the death of Islamic prisoners in Roumieh prison has become a matter that passes without the corrupt authority giving it any care! It is as if those who die there were sentenced to death in agony, oppression and humiliation.

“And never think that Allah is unaware of what the wrongdoers do. He only delays them for a Day when eyes will stare [in horror]” [Ibrahim: 42]

The Minister of Interior and those under him in the prison administration did not call for action when they learnt that the patient from the Islamic detainees, Sheikh Ghassan Salibi, has been in need of heart surgery for three months, which he was unable to have due to the lack of the ability to do so, after the corrupt authority gave up the most basic rights of the prisoner to eat, drink and recover! Then came the news of the death of the detainee, Ahmed Fanas, less than a day later, bringing the number of prisoners who died within three weeks to seven! Most of them are oppressed Islamic prisoners! May Allah have mercy on them.

The corrupt authority lifted its hand from the prisoners about a year ago, and the provision of food, drink, medicine, hospitalization, and surgical operations became at the expense of the prisoner and his family! Most prisoners did not receive healthy food or proper treatment, which led to the spread of diseases among them. The conditions of prisoners worsened with the spread of the Coronavirus epidemic, and after the economic collapse. This neglect led to an increase in deaths among prisoners, while this corrupt authority did not care about their lives nor to their families who lost their sons after long years of injustice and imprisonment, with trials and without trials! They are the ones who have been wronged for many years without trials! Then the injustice was more severe for them in issuing unjust and oppressive sentences that amounted to life imprisonment and death sentence by courts that try them without jurisdiction!

Where is this corrupt authority that claims to be a regulator of security and safety, while people are dying in its prisons without it moving a finger?! And where are the concerned ministers?! Where is the prime minister who claims to represent these Muslims?! And where are the men from the ballot boxes who do not remember this issue except when the elections are near?! Where are you from people dying like this?! Where are you, no one is excluded from you?! Whoever walked with this corrupt authority, whether a minister or a deputy, is responsible for every breath that suffocates in these prisons, rather he is responsible for every burden that falls on the shoulders of the people, because he appointed himself as their representative, working in their service. So, people’s share was nothing but anxiety, affliction and tragic life of their sons, and your share was the luxury of living and safety for you and for those around you!

O corrupt authority, it would have been better for you to hurry to release the Islamic detainees immediately instead of killing them! Not to make them a card that you use to please your masters in America with the pretext of fighting against terrorism, and with which you would please a minister, a representative or an authority holder, with which to bargain with the people in order to win an electoral seat. We know that your hearts are like those whom our Lord (swt) described:

“Then your hearts became hardened after that, being like stones or even harder” [Al-Baqara: 74]. But know that the consequence of injustice is dire, for injustice will be darkness on the Day of Resurrection.

O owners of electoral boxes of every category, we know that you do not see more than the paper that falls in your boxes, and if you are not affected today by the accountability of the families of the Islamic detainees to you, then you are approaching a scene in which you will be told:

“And all of them are coming to Him on the Day of Resurrection alone” [Maryam: 95]. And He Azza wa Jal is Just, does not oppress an atom’s weight, and does not wrong anyone.

As for you, the families of the Islamic detainees, the time has come for you to renounce this political center of liars, who lie and falsely make promises to you, our comfort today, and yours, are in the words of our Lord (swt):

“And it is not [possible] for one to die except by permission of Allah at a decree determined” [Aal-i-Imran: 145]. But the punishment of everyone who betrayed you yesterday is in your hands today, so do not go back to what they caused you to do before.

As for the human rights organizations in Lebanon and outside Lebanon, we hardly hear from you regarding the file of these Islamic detainees! Or are you moving according to the agenda of the masters, supporters and financiers?! If these people wanted to punish a state, we will see you at the forefront of the ranks of those denouncing human rights in that state, and if they were with the corrupt authority in a certain state, you fall silent the silence of the graves, don’t you hear about the deaths of these prisoners in the prisons of the corrupt Lebanese authority?!

The origin of the state is to take care of people’s affairs, solve their problems and help them, but the state in Lebanon is a state of tax collection, humiliation, torture, injustice and killing of the weak, especially by preventing food, medicine, hospitalization and imprisonment in inhumane conditions. We know that these unjust states, and those who follow them from the parties, and those who work with them from the institutions are pawns, some of them are driven by their masters according to their agendas and projects, and some of them are moved by their own interest and benefit, but is it not time for the wise to take a serious action to release the oppressed detainees?! Is it not time for the honourable to seek their victory?! Do we expect more corruption, neglect, transgression and waste of souls?! Stop the massacre of prisoners in Lebanon.

But if you refuse, the rule of Islam will soon be established, in an Islamic state; the Khilafah Rashidah (rightly guided Caliphate) on the method of the Prophethood, Allah willing, will prevent all of that, punish criminals no matter how high positions they hold, it will support the oppressed, honour them and take care of their affairs. We ask Allah (swt) to empower us in His land and help us to punish the criminals with His Justice.

“O My slaves, I have made oppression unlawful for myself and I have made it unlawful among you, so do not oppress one another.”

Bukhari narrated in his Sahih from Asma’ bint Abi Bakr (ra) that the Prophet (saw) offered the eclipse prayer…on completion of the prayer, he said,

“Paradise became near to me that if I had dared, I would have plucked one of its bunches for you and Hell became so near to me that I said, ‘O my Lord will I be among those people?’ Then suddenly I saw a woman and a cat was lacerating her with it claws. On inquiring, it was said that the woman had imprisoned the cat till it died of starvation and she neither fed it nor freed it so that it could feed itself.”

This is regarding a cat that has been imprisoned! How about the human beings whom Allah has honoured and prevented their humiliation?

“And We have certainly honoured the Children of Adam” [Al-Isra: 70].