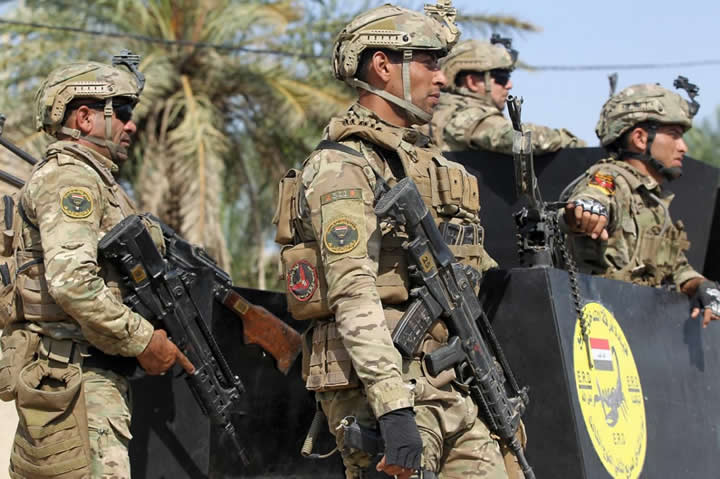 The Tarmiyah area has been witnessing security tightening, searches and arrests by members of the Popular Mobilization Forces since days. Political and tribal parties have expressed their concerns about the re-scenario of Jurf al-Sakhar in Tarmiyah. What happened in Jurf al-Sakhr was that in October 2014, the Popular Mobilization Forces took control after battles with ISIS which was supervised by the commander of the Iranian Quds Army, Qassem Soleimani, who also participated in it according to statements attributed to leaders of the Hezbollah militia. Additionally, they displaced its 140,000 inhabitants and made it a demilitarized zone, and since that date no one has been able to interfere in this file or discuss the return of its people to it. Former Iraqi Prime Minister Haider al-Abadi confirmed to the British newspaper, The Times earlier, “The existence of corrupt armed wings that the government cannot control it, “as Iyad Allawi, Vice President of the Iraqi Republic at the time, stated in 2017, and through a televised statement that millions watched when he said: “The return of the IDPs of Jurf al-Sakhar is exclusively in the hands of Iran and leaders in Lebanon,” and this region has turned into a military barracks and an economic resource for Iranian influence, and these days this scenario is being repeated in the Tameya area, which is one of the six districts surrounding Baghdad (25 kilometers from the center of the capital), which is known as the Baghdad belt, and the city of Tarmiyah is located in the northern suburb of Baghdad and its food basket,. Its population is about 91 thousand people, and it is a fertile land. The expert on Iraqi political and security affairs, Muayad Al-Juhaishi, said in an interview with Erem News: “Certainly, the pro-Iranian militias, and the political forces supporting these militias, want to control all cities. With a Sunni majority, to achieve political and economic goals through demographic change processes.”

O Muslims in Iraq: Know that your first enemy is the American occupier. Since their occupation of Iraq in 2003 and with the help of their regional arm, Iran, as stated by Iranian officials that had it not been for Iran, America would not have been able to occupy Iraq, and this is how America released Iran’s hand in Iraq, and when the Iraqi resistance humiliated America’s arrogance, America with the help of Iran ignited the sectarian strife (fitna) and that is how America was saved. What is happening today in terms of displacement of the safe population in these areas and others, and a topographical change, and the control of militias loyal to Iran and making them military barracks for the manufacture of weapons and cultivating drugs would only have happened with a green light from America; otherwise, what is this silence on the American side on a den of a militia that declares with its false media the hostility and the threat to America?! If the threat was real, then it would have turned this uninhabited area into a rubble was it not the one who made the ancient area from the right side of Mosul rubble under the pretext of terrorism that they made? And threw on them the lava of its smart and unintelligent rockets and cannons, not taking into account the hundreds of thousands of innocent civilians detained, humanity or morals?!

O Muslims: Know that there is no solution to your suffering except with your Islam and a just ruler elected by you who implements the laws of Allan upon you. So you would live a decent life under one Ummah that is not separated by nationalism or torn apart by sectarianism, and only then you would obtain your rights, your lives would be spared and the hands of your enemies would be cut off from attacking you, so to this honour we invite you.

“O believers! Respond to Allah and His Messenger when he calls you to that which gives you life. And know that Allah stands between a person and their heart, and that to Him you will all be gathered.” [Surah Al-Anfal: 24].