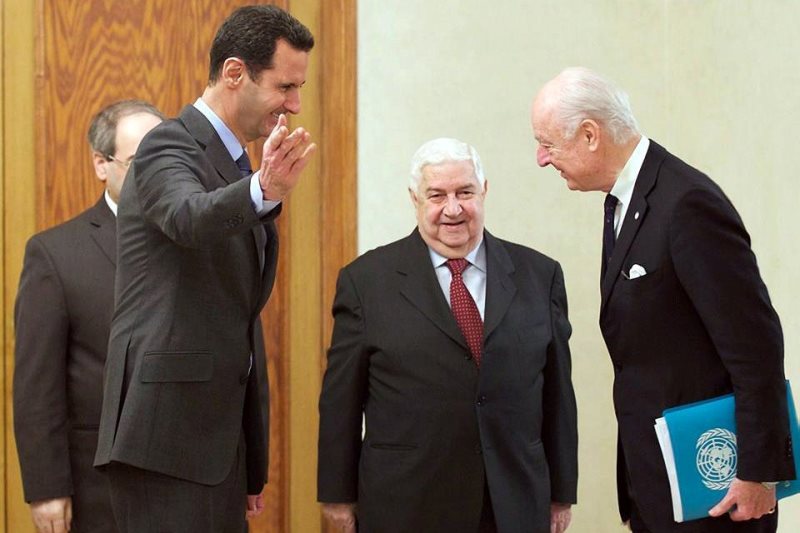 Today the UN’s special envoy to Syria (Staffan de Mistura) urged the global community to prevent a new humanitarian disaster in the province of Idlib which is controlled by opposition factions, and is likely to be the next target for the Syrian regime. De Mistura also went on to say in a donor meeting held in Brussels, that Idlib faces the same fate as Aleppo which was overpowered by the Regime and its allies; including Russia in 2016, and Eastern Ghouta which was recovered in the beginning of April.

This claimer does not care about the abuses that took place in Aleppo and Ghouta, or the cruelties in Idlib which he is warning against. For he is an envoy of an organisation (UN) which is united upon the killing of the people of Syria and their subjugation and defeat by the Butcher of ash-Sham, the American agent Bashir. He knows for sure that his warning will not incite the world’s rulers, systems, institutions and people. The Butcher of ash-Sham had already been supported by the international position in massacres which completely destroyed all human values and norms, they did not move a finger until the ‘fatal’ missile strikes – which numbered in the hundreds- were launched by American battleships as a ‘shield’ for the Butcher’s crimes, and did not even injure one follower of the regime. Truly we understand these remarks for their true realities, threats for the Syrian people that the fate of Idlib will be like that of Aleppo, Ghouta and others unless the Syrian people surrender to the will of the international community by accepting the American agent Bashir as their representative.

What concerns us from the advance threats is what the revolutionaries in Syria and their people should do to avoid what is being manipulated and orchestrated. It must be known to all that submission to the regime through acceptance of international dictates is suicide, with the full meaning of the word. The regime and its followers will not be merciful to anyone who opposes them. If they are able to resolve the battle with the people of Syria, a hopeless person, funded person or an ignorant politician will not survive the oppression of the regime, in addition the regime will burn the rest of the country and kill everyone who raised his voice and rejected the oppression. So, we and the shepherds of camels and cows have tried this system and what’s behind it.

The only option for the people of Syria and the revolutionaries is to cleanse the ranks of those who sold the revolution cheaply – I mean the leaders of the army here – and to re-form their ranks and take Hizb ut Tahrir as a political leader, advisor and evidence for them, so they can pounce on the house of the regime in Damascus before their completion and break them in Idlib. And unless they do so, we who warn our people in Syria that the blood of their martyrs and the torment of their bereavement will remain hanging upon the necks of those who are able to meet this call.

“And you will remember what I [now] say to you, and I entrust my affair to Allah. Indeed, Allah is Seeing of [His] servants.”