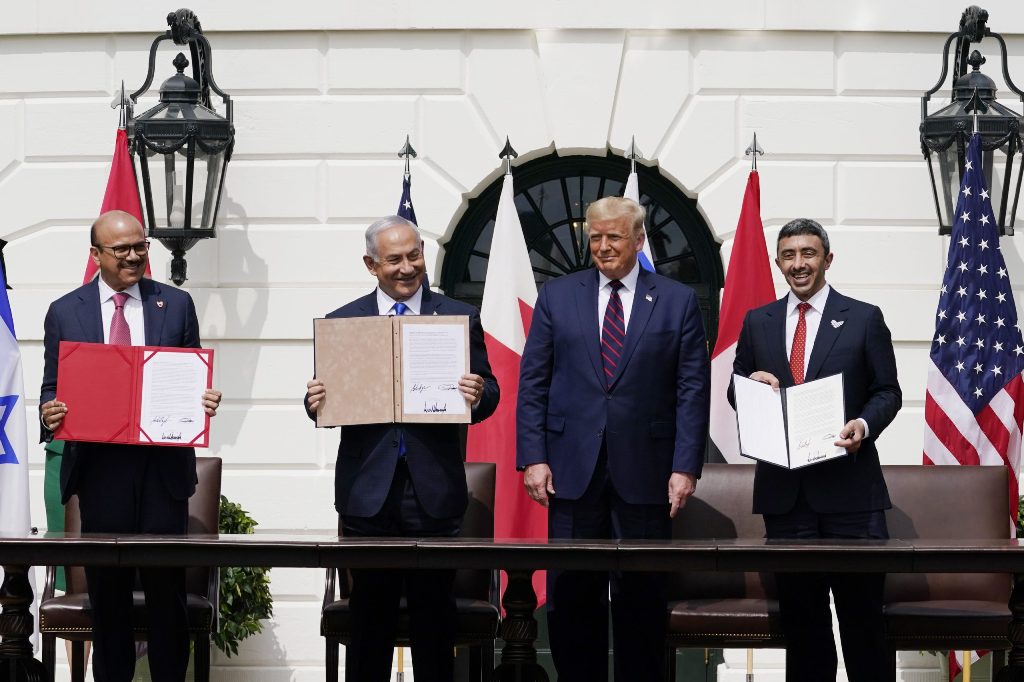 Last week’s peace deal between the Zionist state, Bahrain and the UAE was a stab in the heart of the Palestine cause and a blow to the Muslim Ummah – effectively declaring this, our most vital Ummatic concern as illegitimate and unworthy of Arab and Muslim unity.

In deals brokered by Jared Kushner the son in law of President Trump, the Gulf States proudly exhibited their new alliance with Prime Minister Netanyahu on the White House’s South Lawn. Together they boasted about a new era of Arab unity with the Zionist entity – which they expect to soon extend to Oman and Saudi, before the scattered territories of Palestine itself.

This insidious interference by the Trump administration in the affairs of the Muslims and the Blessed land of Al Quds, is the continuation of the US’s long term vision in the region which it has been working towards for decades.

In 1978 US President Jimmy Carter laid out the Camp David agreement. A set of agreements between former Egyptian President Anwar Sadat and the former Zionist Prime Minister Menachem Begin.

Officially titled as the ‘Framework for the Middle East’ its three objectives were to 1) accommodate a process for Palestinian self-governance in Gaza and the West Bank, 2) agree a conclusive peace deal between Egypt and the Zionist state, and 3) reproduce this ‘framework’ with the Zionist state’s other neighbours.

ln return for agreeing to the framework, maintaining peaceful relations, officially recognising the Zionist state, and opening the Suez Canal, the Jewish entity withdrew from the Sinai Peninsula and established bilateral trade.

Based on this ‘framework’, in 1993 and 1995 the Oslo Accords were signed between the Zionist entity and the PLO. The two agreements created a Palestinian authority with limited self-governance in Gaza and the West Bank, in which both sides officially recognised one another in the hope of paving the way to resolve the issues of the Zionist state’s borders, its settlements and the status of Jerusalem.

Lastly in 1994, brokered once again by the US, President Bill Clinton witnessed Jordan’s King Hussain and Prime Minister Yitzak Rabin make peace and normalise relations at the border town of Wadi Araba, as per the Framework for peace in the Middle East. Thus reducing the isolation the Jewish entity had faced since barging into and occupying Palestine in 1948.

Clearly the rulers of the Muslims are happy to collaborate time and again with the Zionist entity and its agents. They overlook the catalogue of wicked and brutal crimes and uphold the insidious narrative that criminalises Palestinian resistance.

However the Muslim Ummah’s sentiments are otherwise.

We have always been averse to the idea of normalising relations with the Zionists, and we are alert to every harm and atrocity against the people of Palestine and the Blessed Land.

Since the inception of the occupying state, the Muslim Ummah has witnessed the massacres of thousands, the daily brutal and cold-blooded murders of innocent, unarmed men, women and children, the mass imprisonment of the youth of Palestine for decades at a time, even of children under ten years old. The stolen and purposeful destruction of homes, farmland and orchards – let alone the blockade, organ harvesting and the sustained bombing of Gaza with white phosphorus and cluster bombs in recent years.

Generations of Muslims have awareness, love and concern for their brothers and sisters in Islam. Their unity is far greater than any allegiance to a nationalistic or pan Arab bond. As the land of Al Isra’ wal Mir’aj from where our beloved Prophet sallallahu alayhi wa sallam ascended to the seven heavens – Palestine and its most blessed and beloved people, can and will never be forsaken or abandoned!

Therefore the Ummah’s mass rejection of the illegal occupiers is well known and ever growing. This is obvious from the huge number of organisations and movements, articles, newsletters and publications, rallies and protests, the boycotting of ‘Israeli’ products which has seen the BDS movement grow exponentially – as well as the calls to jihad and the resumption of the promised Khilafah (Caliphate) on the way of the Prophethood to deal with the problem.

Since this latest UAE / Bahrain betrayal, an Emirati civil group known as the ‘UAE Anti-Normalisation Association’ has launched an online Twitter campaign with the hashtag ‘people against normalisation’, which to date has gained over a million signatures and even mandates its own pro-Palestine charter. Despite the crackdown on its activists who risk imprisonment of up to ten years on vague national security related charges, a number of associations across the region have lent their support to the initiative, including the Palestine Advocacy Association, the Bahrain Society for Resistance to Normalisation, Moroccan Observatory against Normalisation and the Palestinian Forum in Jordan.

This move, like the others, to garner peace with the open enemies of Islam and the Muslims, is a great sin that has exposed and continues to humiliate all those who support and partake in it – generating a cycle of consequences the rulers of the Muslims utterly failed to predict.

Consider all the Muslim nations that were so desperate to prove their worth to the imperialist West who misunderstood the Western nations’ material advancements to be worth more than the holistic progress and social stability that Islam has to offer.

Despite their obedience to the disingenuous Capitalists, these Muslim nations have been reduced to little more than casinos, (where the house always wins) for the Western nations, who use every means and ulterior motive available to strip them of resources, set tariffs on exports, establish military bases in their lands, permit them to pay lip service at global health and climate change conferences as if their opinion actually matters, and whose vote at the UN, even for themselves let alone in support of Palestine will be vetoed anyway.

These are the consequence of our leaders’ betrayal – and the price the Ummah pays collectively and individually is yet another tier of injustice and oppression.

Despite the great betrayals this Ummah has faced at the hands of its own leaders. Allah (swt) has promised that the sincerity and good deeds of the Ummah will not be wasted. Allah ‎(swt) will deliver a people He (swt) loves to the blessed land of Isra’ wal Mir’aj to defeat the vicious Zionist entity and uproot it once and for all.

Allah ‎(swt) says in the Quran… يَا أَيُّهَا الَّذِينَ آمَنُواْ مَن يَرْتَدَّ مِنكُمْ عَن دِينِهِ فَسَوْفَ يَأْتِي اللّهُ بِقَوْمٍ يُحِبُّهُمْ وَيُحِبُّونَهُ أَذِلَّةٍ عَلَى الْمُؤْمِنِينَ أَعِزَّةٍ عَلَى الْكَافِرِينَ يُجَاهِدُونَ فِي سَبِيلِ اللّهِ وَلاَ يَخَافُونَ لَوْمَةَ لآئِمٍ ذَلِكَ فَضْلُ اللّهِ يُؤْتِيهِ مَن يَشَاء وَاللّهُ وَاسِعٌ عَلِيمٌ “O you who believe, if any of you should ever turn away from your faith, remember that Allah will raise up a people whom He loves, and who love Him; a people humble towards the believers, and firm towards the disbelievers, who will strive hard in the way of Allah and will not fear the blame of the blamers. This is the favour of Allah which He grants to whom He wills. Allah is vast in resources, All-Knowing.” [Surah Al Maidah: 54].

The loyal party working to fulfill this promise of Allah Almighty and the glad tidings of His Messenger (saw), will be a movement that does not lie to its people. With sight and insight, it will lead the Ummah to the good that will revive it with glory and victory in this life and the Next.