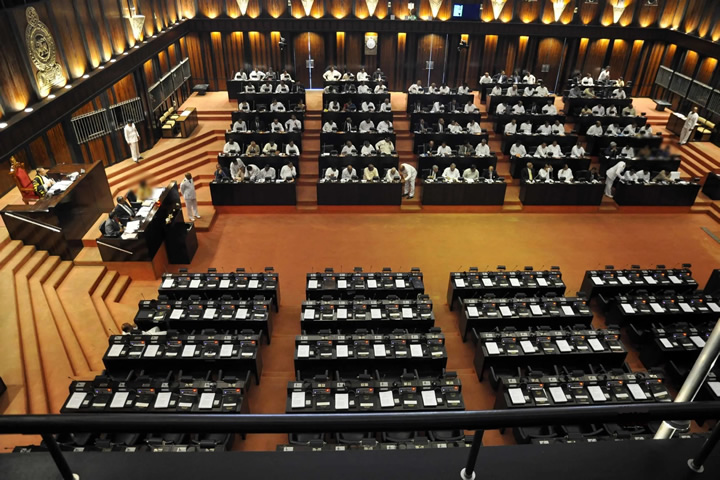 On Wednesday, 10th March, Sri Lanka’s Public Security Minister, Sarath Weerasekara announced to parliament his intention to ban Hizb ut Tahrir and arrest its key members in the country. Here arises the first and major question for the public and the political and media milieu in Sri Lanka: What is the offence committed by Hizb ut Tahrir for the minister to announce such claims? Moreover, Hizb ut Tahrir has been operating for a long time in Sri Lanka and in surrounding Muslim countries, and in the capitals of the countries of the world and there was never any recorded action in its record that violated the security of these peoples. Indeed, the party has always drawn the attention of these peoples to their usurped rights and reveals those who conspire against them and invites them to apply the Khilafah (Caliphate) upon the methodology of our master Muhammad (saw).

Therefore, accusing Hizb ut Tahrir of terrorism has become one of the most blatant lies worldwide;and many politicians have tried before Mr. Weerasekara to accuse Hizb ut Tahrir of terrorism, but have exposed themselves before the public opinion.Thus, Mr. Weerasikara has failed in his responsibility by misleading the people of Sri Lanka and the public opinion by falsely accusing Hizb ut Tahrir of being an extremist movement that poses a threat to the security of the country. Additionally, Mr. Weerasekara, who is Minister of Public Security, has failed to provide a single piece of evidence to substantiate his fictitious claims. Here it is important for us to reiterate the following points:

1. Hizb ut Tahrir is a global political party whose ideology is Islam and its aim is to resume an Islamic way of life by the establishment of the Khilafah (Caliphate) based upon the method of the Prophethood in the Muslim lands. This is a state that was praised historically by nations for its justice, humanitarianism, prosperity, exemplary treatment of those of other faiths and its defence of the oppressed. Therefore, the citizens of Sri Lanka and indeed the world have nothing to fear about the return of this system. Rather, it should be welcomed considering the mass oppression, poverty and injustice that plagues humanity today.

2. Hizb ut Tahir adopts the methodology employed by Prophet Muhammad (saw) when he established the first state built upon Islam in Madinah al-Munawwarah. This method was exclusively intellectual and political in nature and devoid of violence. Therefore, Hizb ut Tahrir rejects the use of violence to achieve political change as we view it as contradictory to Islam. The party has not been involved in a single act of violence since its inception in 1953. Indeed, human rights organisations have categorised our members imprisoned by oppressive regimes as political prisoners of conscience. Furthermore, the party has always been unequivocal that violence against innocents is prohibited in Islam.

3. In countries outside of the Muslim lands, Hizb ut Tahrir does not work to change the system of government but rather engages with Muslim communities to adhere to their Islamic beliefs and practices. This includes the duty upon Muslims to have good relations with the non-Muslims of society, to protect them from harm, help look after their needs and engage in positive discussions to dispel the many misconceptions regarding Islam. Indeed, the Prophet (saw) said:

“Whoever believes in Allah and the Last Day, let him honour his neighbour.”
[Ṣaḥiḥ Bukhari,  Sahih Muslim]

Isolationism, separatism and creating divisions within communities is therefore at odds with the Islamic way of life.

4. The false narrative that labels the support for the Shariah and Khilafah, or expression of grievances against the oppression of Muslims globally, as signs of extremism that may lead to violence, has been utterly discredited by many academics internationally. This conveyor belt theory developed inside US neocon think tanks has also been rejected by institutions within various Western states. In July 2010, a British civil service memo to ministers in the Tory-led coalition government stated that it was wrong “to regard radicalisation in this country as a linear ‘conveyor belt’ moving from grievance, through radicalisation, to violence… This thesis seems to both misread the radicalisation process and to give undue weight to ideological factors.”

5. Hizb ut Tahrir is not a marginal party. Rather, it is a party that works among and with the Islamic Ummah and cultures millions on a global level. Furthermore, it operates legally and openly within most states in the West where we have conducted dozens of public conferences and seminars, engaged in debate with leading thinkers, journalists and politicians, and where we distribute our political material and interact with the public both in person and online.

In light of these points, it is evident that the Sri Lankan regime is playing politics with national security, creating imaginary threats and politicizing the debate on ‘extremism’ to both coerce Muslims into leaving core Islamic beliefs and practices, and to garner further support amongst ultranationalist anti-minority sectors of the society for its rule. We hope that independent-minded thinkers, journalists, politicians and others within the country will see through these political games and voice their opposition to this continuing marginalization of innocent Muslims and Islamic groups in the island.