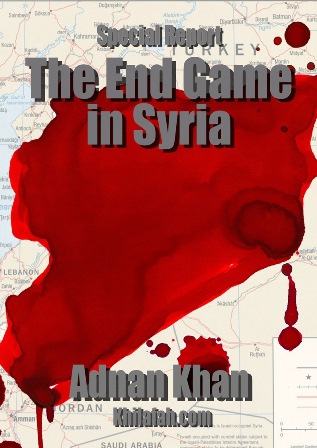 Russia’s deputy foreign minister Mikhail Bogdanov, admitted on December 13th 2012, what many have known for some time. Russia’s official admitted that that the Syrian government may be defeated by opposition forces as al-Assad’s forces were “losing more and more control and territory.” The death toll in the country is now approaching 70,000 people since the conflict began.

The revolution in Syria is has now been raging for two years. The massacres by the al-Assad regime are beamed around the world on a daily basis and have almost become normalised. The people of Syria rose up against the brutal rule of Bashar al-Assad in spite of the brutal tactics of suppression used to quell the uprising. With little in the way of weaponry and with massacres being carried out across the country the people of Syria caused a stalemate with the Syrian regime and now have regime forces on the retreat. The Ummah continues to show tremendous metal in the face of tanks, fighter jets and artillery.

What began with a single man in the markets of Tunisia spread to thousands on the streets of Cairo and evolved to hundreds of thousands demanding political change for the entire region. The self-immolation of Mohamed Bouazizi in Tunisia created a sweeping wave, which crossed the artificial borders in the region until it reached Syria. It was only natural it would engulf Syria as the people of the country have suffered for decades under the brutal rule of the al-Assad’s who rule the country like the mafia.

The uprising in Syria has many moving parts and the outcome in the country will determine the future direction of the Arab spring. This has kept the international community fully engaged in the evolution of the crisis. Syria is now the official battleground between those who wish to see the nation continue playing a role in protecting foreign interests in the region and those who wish to change the destiny of the country and make it representative of their values and independent from outside interference.

This special report from Khilafah.com will look at Syria past, present and the future. It will look at emergence of Islam in Al-Sham and the impact it has left on the people of the region. The report will highlight the creation of modern Syria by the Sykes-Picot agreement between the French and British, which brought the Alawi’s out from the wilderness and for the first time into a position of power. It will highlight how foreign interference has remained in the country to this very day though different guises and how the Ba’athist regime has protected foreign interests. As the uprising in Syria has evolved it has been interesting observing the changing positions of the world’s powers to the developments on the ground, these will be analysed in order to accurately highlight their indifference to the demands of the indigenous people of Syria.

This special report will analyse Basher al-Assad’s strategy for survival and why he has failed to halt the advance of the opposition groups. The opposition has been very successful in reducing the regimes grip to pockets around the country and Damascus, even though they lack numbers, weapons and capability. This report will analyse the different elements that make up the opposition and their strategy for overthrowing the regime and why they have been so successful.

With the end game now clearly in sight the day after scenario will be looked at, focusing on the polices and challenges that will need to be dealt with.

Imam Ahmad and Tirmidhi narrated in their respected collections on the authority of Zaid ibn Thabit that the Prophet صلى الله عليه وسلم said, ‘How blessed is al-Sham? The companions around asked: ‘Why is that? The Messenger صلى الله عليه وسلم replied, ‘I see the angels of Allah spreading their wings over al-Sham.’