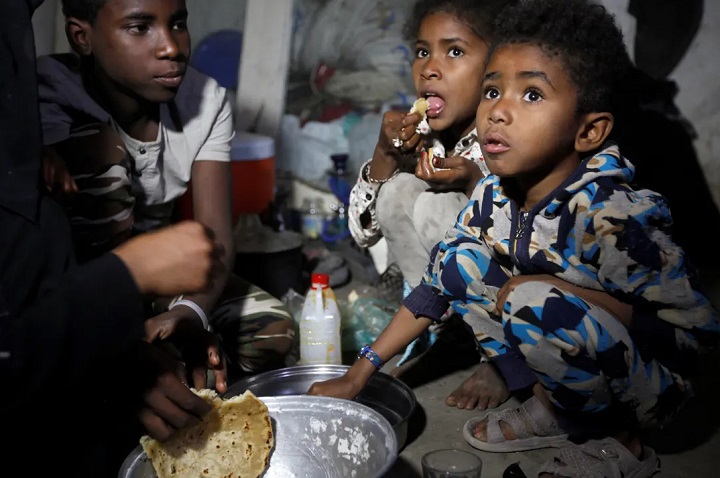 The people returned to the way they used to live in the confusion of life, and as a result of the absence of the role of the government; which was the reason for the current situation. The merchants took advantage of the absence of the role of the government and exposed people to difficulties: the bitterness of the high prices without accountability from the government, the devaluation of the local currency against the dollar, and the looting of the country’s wealth of oil and minerals at the hands of the influential such as Ali Mohsin, Ahmad Al-Eisi and others, whom the people of Yemen must work to reject. So, what do the people expect from a government that lives outside the country, and is enjoying the riches, whether they are in Riyadh, Cairo or Turkey, while the people of Yemen are suffering from hardship, poverty and need?! The government’s role in this was limited like the effect of a sedative pill that ends quickly and the pain returns as it was!

As a result of this situation, dozens of people organized a picket in the Crater district in the temporary capital, Aden, denouncing the deteriorating economic situation, the decline in the currency and the high cost of living. The protesters called on the government of Abd Rabbo to come up with urgent solutions to stop this accelerating collapse of the currency against other currencies, and to improve the living and services conditions in the southern governorates. The popular uprising in Hadhramaut governorate also organized a movement against the government and its corruption, and its control over the wealth of the governorate.

As a result of the international conflict over it in the north and south, the situation of the people of Yemen has reached a slow death without screaming or wailing. They die quietly from the injustice of the unforgiving and catastrophic conditions they are in. The interruption of salaries, the collapse of the currency against the dollar and other currencies, the loss of people’s jobs that they earn their livelihood from, the increase in the price of the customs dollar, and the absence of the care taking role from the governments of Sana’a and Aden, have increased the suffering of the people, especially in the southern governorates, where the currency collapsed by a large margin, as if we are in front of two different currencies of two separate countries!

The compulsory fiat paper rule prevailing in the world today, as a result of ruling by Capitalism and the absence of the gold rule, has helped the capitalist ideology to imprint international relations and global trade with its nature, and governing it with its rules and regulations. Among the most prominent of what it brought was the creation of a monetary system that enabled the major capitalist countries to suck the blood of other people and plunder their wealth.

Also, the monetary measure of the mandatory money currently circulating in various countries of the world is the strength and dominance of the issuer of this money, it has no intrinsic value in its essence, just as it has no fixed value. This reality is a departure from the origin according to the rules of Shariah and also a departure from the origin according to the basics of monetary economy, because taking cash that is not in lieu of a certain fixed amount of in-kind funds acceptable to everyone can be exchanged for it at any time, and suspending the validity and purchasing power of this cash in the hands of a state that runs it according to its interests, it is only one of the most powerful means of extending this country’s influence over the rest of the people of the world.

For this reason, no aspect of life has been spared; all has been afflicted with turmoil and ruin, after the absence of Allah’s Shariah from the earth and the demise of the dominion of Islam from Muslim lands, and the domination of man-made ideologies in leading the world. Therefore, it is necessary to work to bring the system that preserves human rights and their efforts, and does not allow their wealth to fall in the hands of others unjustly. That system will not be implemented except under the rule of the second Khilafah Rashidah (rightly-guided Caliphate) on the method of the Prophethood. We ask Allah (swt) to bring soon the day when gold and silver become the currency of our state, as Allah (swt) commanded his servants and chose for them.