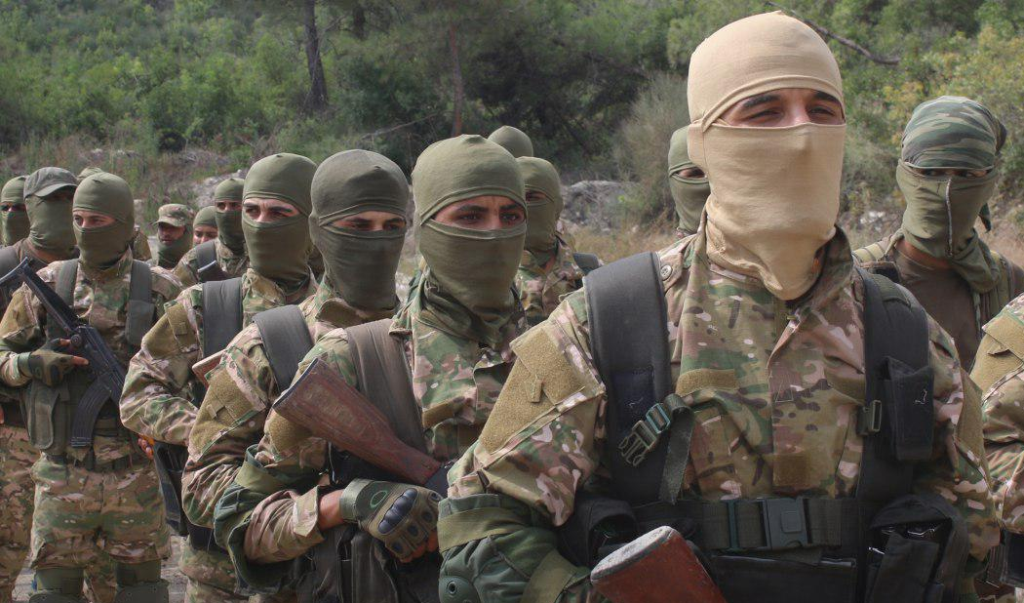 The Turkish regime was disturbed by the intensive work of the Dawah carriers, which focused on stopping the Sochi Conference and its most dangerous clauses: to open international roads; especially after many of the region’s notables interacted with this move, during which the party organized many pickets on these roads; and many visits to the so-called “guarantor” Turkish points”, and held a conference in which hundreds of dignitaries gathered to discuss the conditions of the revolution; and presented appropriate solutions that put an end to this continuous deterioration, followed by numerous statements issued by the notables of the regions, which prompted the Turkish regime to move one of its tools (al-Julani) to launch a campaign against the members of Hizb ut Tahrir and the notables of liberated areas. They started with the confiscation of the equipment of the Media Office of Hizb ut Tahrir’s Broadcast.

Followed by a campaign of arrests of dozens of advocates of the Khilafah (Caliphate) and the notables; during which their security men perpetrated the worst and most criminal methods that fired directly during the raid and arrest process, like what happened in the town of Killi. It is worth noting that these repressive practices are not specific to the HTS faction (Hay’at Tahrir al-Sham, “Organization for the Liberation of the Levant”), but rather they are general practices of most of the factions associated with state intelligence; with varying proportions of oppression and criminality. It was preceded by ISIS that arrested the members of Hizb ut Tahrir and harassed and even executed some of them. It was also preceded by the Legion of the Rahman (Failaq Ar-Rahman), the Army of Islam (Jaish Al-Islam) in Ghouta, Suqour al-Sham Brigade and others who were willing to be tools in the hands of international intelligence against the advocates of the Khilafah; and against everyone who uttered the word of truth.

You all know the criminality of the Russian regime and the rest of the regimes, this criminality from which no mosque, school, bakery, house, or prison has been spared and all of you know that the issue of targeting prisons is not born today. Idlib Central Prison was targeted more than once, and hundreds of prisoners were killed; and many of their relatives, women and children who were visiting their husbands and fathers. Other prisons were targeted, and it is known to all that prisons in the liberated areas under this factional system that made the policy of oppression, bullying, and gagging mouths its approach. They have increased and have become countless. And with the insistence of this factional system to arrest those sincere from all areas and keep them in prison with this violent bombing of the liberated areas in general, we consider this insistence as a deliberate killing and intended liquidation, as it is not hidden to everyone the rapid and sudden fall of areas, and this makes it possible for many prisoners to fall into the clutches of the tyrant of Ash-Sham.

Accordingly, everyone must move to release the oppressed prisoners from the prisons of the factional system, and each sincere, regardless of his position, must have a position to be reckoned with by Allah; so he works to get rid of the hegemony of the so-called supportive states over the decisions of the faction leaders and proceed ahead with the work to topple the regime of criminality and the establishment of the rule of Islam in which no one is oppressed.

“And say, “Do [as you will], for Allah will see your deeds, and [so, will] His Messenger and the believers. And you will be returned to the Knower of the unseen and the witnessed, and He will inform you of what you used to do.” [At-Tawba: 105]