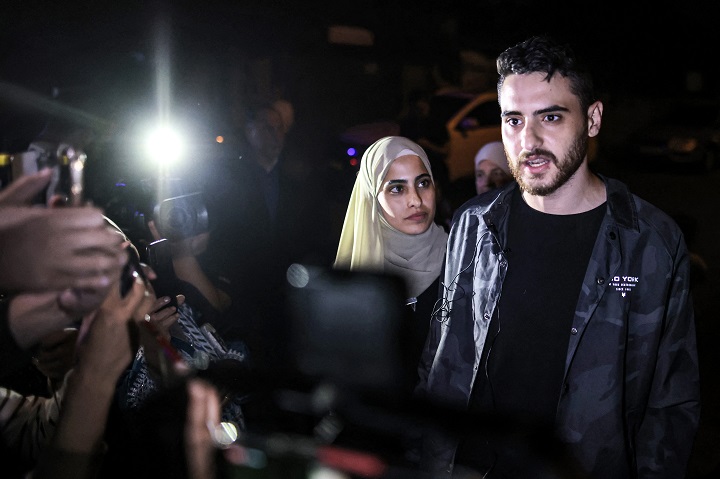 On the 6th of June, the activist twin siblings Muna and Muhammad al-Kurd, from the Sheikh Jarrah neighborhood in East Jerusalem were arrested and detained by the Zionist occupation. Muna al-Kurd was arrested after a police raid in her home in Sheikh Jarrah.

The two activists have been at the forefront of a comprehensive social media campaign exposing the forced expulsion of Sheikh Jarrah residents from their homes. In subsequent demonstrations against the arrest of the twins, the Zionist occupation has used tear gas, rubber bullets and stun grenades against protesters.

Al-Jazeera’s journalist, Givara Budeiri, was also assaulted and arrested on the 5th of June, for reporting on the demonstrations in Sheikh Jarrah, and was released after several hours of detention, on the condition that she does not enter Sheikh Jarrah for two weeks.

More than 1,000 Palestinian families have been forcibly displaced from their homes by Zionist settlers, and 1,500 residents of the Silwan neighborhood in Jerusalem have been ordered to demolish their homes within 21 days, or else they will be forced into paying the demolition costs themselves. They have been ordered to do so, to make room for a park that will serve as a tourist attraction.

Comment:
The Jewish entity is conducting ethnic cleansing of Palestinians in Jerusalem, including in Sheikh Jarrah. Muna al-Kurd’s family house in Sheikh Jarrah was defiled by a Jewish settler who said that if he does not steal the house, another settler will do it.

It is no wonder that the Jewish entity uses all possible means to silence critics that expose their crimes, even if it means violating the so-called freedom of the press that Western states claim to hold sacred. The various Western heads of state who criticize tyrants violating freedom of the press, are silent, when the Jewish entity does the same.

In addition to the massacres of civilians and the bombing of homes in Gaza, the Jewish entity bombed a building that housed various international media outlets such as the Associated Press and Al-Jazeera, under the pretext of targeting Hamas’s intelligence offices. Even social media giants such as Facebook and Instagram have officially collaborated with the Zionist occupation, which consequently have led to the banning of accounts and posts that are critical of the Zionist occupation, even though these Western giant media platforms claim to champion the so-called freedom of speech.

Several reports show that journalists are regularly arrested and assaulted by the Zionist occupation, when they bring information and news about the oppression of the Palestinians. Among Western politicians is the commonly used terms: “the only democracy of the Middle East”, by which they describe the Jewish occupation, as if they are describing a role model. The hypocrisy becomes apparent when the occupiers abuse children, women, the elderly, and journalists, violating all the so-called “human rights” and so-called freedom of the media, without triggering condemnation from Western leaders. Conversely, Western leaders have been in line to condemn regimes like the Belarusian regime, which is being condemned internationally, for detaining critics.

Hundreds have been killed in bombings in Gaza, and thousands more have been injured. The ceasefire, which has been portrayed by some as a victory is a meaningless agreement that does not stop the barbarism of the Zionists towards the Muslims in Palestine. The violations of the so-called freedom of the press and the lack of consequences, is yet another proof that the so-called “international community” ignores obvious crimes and that the Zionists get away with anything, without the major consequences.

Even the tongues and mouths of Muslims are suppressed, and it will not cease to be the case, until the occupation ceases, so that the illegal settlements and massacres can be stopped, and the Muslims of Palestine can regain security and their homes under a just Khilafah (Caliphate) State.