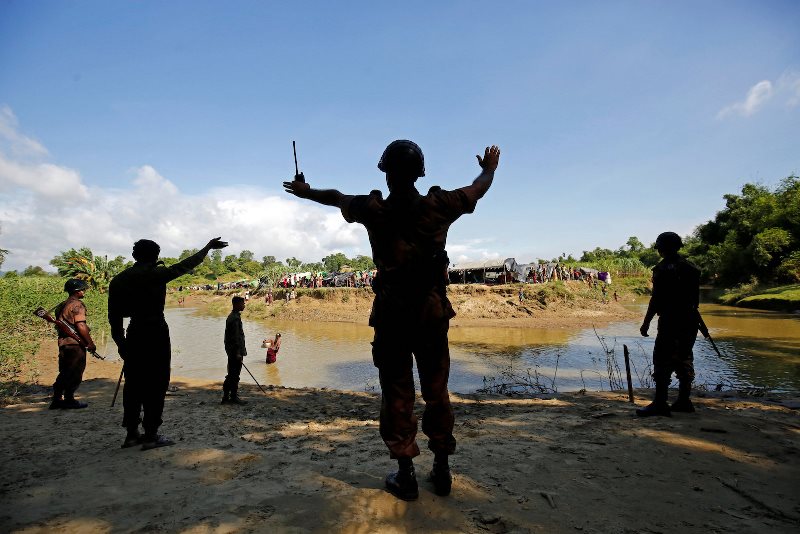 On 7th October 2017, Bangladesh’s Prime Minister Sheikha Hasina has been accorded a grand reception at the airport by her party leaders and activists for her ‘bold speech’ (!!) on behalf of Rohingya Muslims at United Nations General Assembly (UNGA). Ruling party leaders proclaim that her 5-point demand drew attention of the world community due to which all the world leaders are now beside Bangladesh regarding the Rohingya crisis. Awami League activists have already started calling her the ‘Mother of Humanity’, a term coined by some British media, for her so-called humanitarian role on the Rohingya issue.

Sheikh Hasina has superbly staged melodramas one after another to take advantage of the Rohingya crisis. She behaved most cruelly by forcibly pushing back thousands of fleeing Rohingya Muslims since the end of August. Later, by the advice of her Western masters, she offered the Rohingya Muslims so called “humanitarian assistance” to tap into the Islamic sentiment of the people so as to improve the last dregs of her popularity.

Hasina cunningly said a few days ago while visiting the refugee camps in Cox’s Bazar: ‘If we have the ability to feed 160 million people of Bangladesh, we can also feed 700,000 Rohingya refugees’. As if, these Muslim people, victims of the worst atrocities, have come to her for food! Moreover, these oppressed people have not come to Bangladesh looking for a mother.

Instead of a mother, they need a strong leader like Khilafah Mu’tasim Billah, who did not just stop at responding to the call of a Muslim woman oppressed by a Roman soldier, but utterly defeated the barbarous Roman army to ensure the permanent security of the honour for all Muslim women in that land.

Today, instead of a “mother of humanity” what is needed is this kind of courageous leadership that, in order to permanently secure the honour of the Rohingya Muslim women and the lives of the Muslim brothers and sisters, will destroy the transgressing and murderous Myanmar army whose very existence threaten humanity.

Only the Ruler of the Islamic State, the Khalifah is that leadership who can implement this through the Islamic foreign policy. Because of the ridiculous foreign policy (“Friendship With All, Enmity With None”) of the present Kufr democratic ruling system, Hasina’s government is maintaining friendship with the terrorist state of Myanmar even after all of their transgressions, and even proposed joint military operations for their security!

Additionally, the Hasina government turned to its ‘genuine friends’ India-China and its Western masters US-UK and utterly failed to get any solution for the Rohingya crisis, because all these states have economic, regional and geopolitical interests concerning Myanmar, a matter this ignorant Hasina government has completely failed to realize. So, the title of “Mother of Humanity” and the farcical grand reception for Hasina are just futile attempts to hide her failures.

Also, how can a leader be called “Mother of Humanity” when she tyrannically turned a country into a land of terror! She started with the killing of military officers in Pilkhana, and since then has been conducting one after another treacherous activities against the nation, and due to her hatred of Muslims and Islam has been carrying out widespread and systematic torture of righteous and sincere Islamic political activists, which are nothing short of crimes against humanity. Anyone who opposes her tyranny is forcefully silenced or ‘disappears’. As a result, she has earned the title of “Mother of Tyranny” from the people of this nation. The Western colonialists are realizing that their puppets are getting disconnected from the mass people as their Islam-hating faces are being unmasked. Thus, the Western masters feel that awarding of titles like “Mother of Humanity’ could help their lackeys gain some trustworthiness among their countrymen. Hence, the grand reception for Hasina and her false title of “Mother of Humanity” are nothing but means to distract the people from realizing the true reality.